Have again made use of Polly’s movie picture projector the last couple of nights, showing the pictures out in the open. However, it has been a bit chilly and somewhat on the damp side, but nevertheless the open is still the best place to do the projector.

The men have been having a great time here because the French gals have it all over the Italian ones, and they’ve been having nightly dances at a nearby swimming-hole and all has been mighty gay.  It’s nice for the men that we are really the only outfit anywhere near this particular town.  Of course, even if other outfits were around, just as in Sicily, the 59th generally manages to take over anyway.  The men have found a very great difference not only in looks but in actions between the French and Italian gals.  There is nowhere near the promiscuity that there was in Italy.

Mom, you stump me by asking what I want for Christmas. Golly, I really don’t know what to ask for other than assortments of Blum’s stuff. Perhaps by Christmas things will be over over here — who knows?  But, be that as it may, I hope I’ll be able to spend Xmas with the family (the family over here).  So, if you can, keep that in mind when you send things.

Nope, Mom, I need no more gloves – have three pair in good shape; more than enough shirts (in fact, living out of a musette bag and what we had on for 3 wks.) made me realize how much over-loaded we really are in our personal luggage – we don’t need 1/3 the stuff we have, ‘cause it really isn’t hard to wash stuff in one’s helmet if one doesn’t let the dirty stuff pile up, but does it almost daily.

Ah, I know, I could stand two pair of heavy, long wool socks (wool or the closest thing to it). The socks we get are a mixture of wool and cotton and, to fill up my boots, which are a trifle large, I frequently wear two pair. I did have a couple of heavy wool ones in Africa, but they got lost somewhere along the line.

Things over here certainly have been moving fast — Time and Newsweek have had some good paragraphs on our friend Georgie Patton who, despite his temper, is one of the top two or three battle generals in this war.  Having spent a few weeks with the gang at whose place all G.P.’s unfavorable publicity began, I heard all the highlights.  All of those whom we have known, some very well, who have been on Patton’s staff, always knew he was O.K.  They said that he would perhaps lose men rapidly, but in the long run his casualties would be far less than if he had gone cautiously and taken longer to accomplish his objective.  My bets are on him to beat the Russians, to beat everybody to Hitler — maybe he’ll even take Hitler himself with those pearl-handled guns of his — we shall see!! 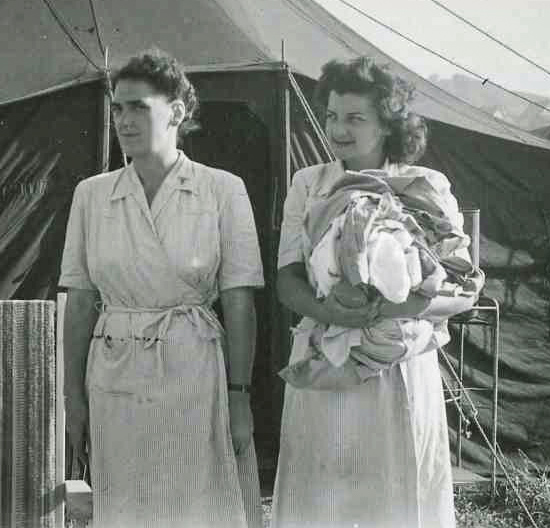 Thanks to Polly’s projector, the unit is able to watch movies again.  Shown above is Nurse Polly (Paulette DelPeche) on the right holding laundry, with Nurse McIntyre. 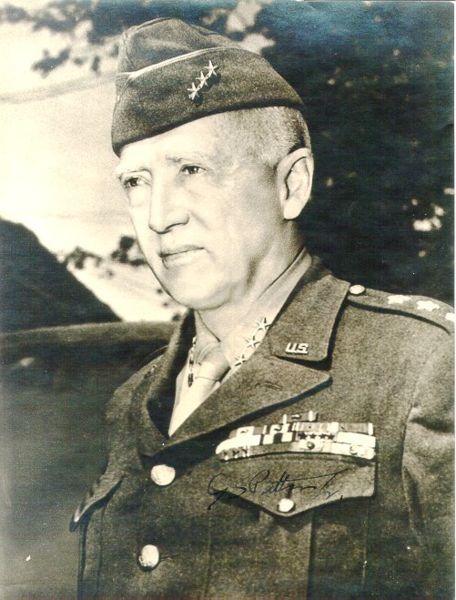 René makes a few comments to his parents about General George Patton, who he refers to as “Georgie,” closing with, “Maybe he’ll even take Hitler himself with those pearl-handled guns of his.” However, according to a quote attributed to General Patton responding to an inquiry about his revolvers, “Son, only a pimp in a Louisiana whore-house carries pearl-handled revolvers. These are ivory.”