You will be interested to hear the news that some local French people gave us the other night, and that is that the postal service has been re-established between the French and the American people. So, it should not be too long before you get some direct news of our relatives. I, too, am investigating about the possibility of my writing to the folks here also. I also suggest that you start writing to the last known addresses now, as it will probably be a matter of several weeks before they actually get the letters, even if the service has started as of now.

I had a very interesting evening a couple of days ago.  Had been invited the night before, to have dinner with a young couple, and not knowing if I would be able to get free, I had made only a tentative date with them.  (This couple had just come up to me in the area and asked me because someone pointed me out as being able to speak French.)  Well, the following evening they came out with an extra bicycle to get me and take me to their home for dinner.  I was ready and away we cycled.

On the way into town they said that, not knowing if I was going to be able to make it, they had also asked two others and hoped I didn’t mind.  Of course I didn’t, but was a bit puzzled.  Then, when we arrived in town, who do I see but Cy Kiernan and Walt Morduant who had walked into town a short while before.  They were the other two!!  Then what happens, but the father of this fellow who had invited me shows up (outside the little cafe where we were congregated) with Carroll Russell and Marv Hodgson.  So there were five of us!  Well, we soon found out what had happened.  Apparently they had asked me first and when I wasn’t sure of our condition they had bumped into Russell and Hodgson who gave them the same answer, but told them that if they could make it they would drop by at their house (not intending to go there for dinner without more notice for the family, however).  Then, this couple had gone back into town and there they met Walt and Cy and, wanting to be sure to have someone for dinner guests, asked them, getting the same kind of indefinite answer.  They didn’t realize, of course, that if one could make it, then all could, and if one couldn’t then none could.  Anyway, we felt awfully embarrassed that we all showed up not knowing that the others had been invited.  We certainly didn’t expect them to have enough food to feed all of us, but, by gum, they did!

These people, it turned out, the parents of the young man, were bakers who had come from Metz in 1940, and have had a modest baking shop here.  The son is not a baker but a pastry and candy man (a specialist, in other words).  They were a typical middle-class family, most entertaining, and exceedingly friendly.  We really had a grand time.

They spoke no English, which was good for us, but every so often we would get talking English among ourselves and then one or the other of us would stop the rest and get all talking French again. Carroll Russell speaks very well (having gone to McGill and having lived in Canada for some time) and Cy Kiernan also speaks rather well. Walt and Marve have picked up enough to get along, so we really all enjoyed the evening very much. The mother is sort of roll-polly and full of laughter and who told us about the beer drinking in Metz – how, at the end of an evening she was used to having the saucers of 20 liters of beer standing piled in front of her. She was really cute.

One thing of interest they told us regarding Germany before the war was that when they went touring in Germany in 1938, with the little Citroen that they had bought, the people stared at them.  For in Germany, only the members of Hitler’s Government and the rich people had any sort of autos at all.  That people of the middle-class should have an auto was almost unbelievable as far as the German people were concerned.

For supper we had some excellently prepared macaroni with tomato sauce; very tasty rabbit; and a lettuce salad in a big bowl like at home; a plain vanilla custard; grapes, plums, and peaches. And, of course, we had plenty of wine with each course.  Not a pretentious meal, but we were mighty full when we finished and felt like saying, “Je voudrais bien mais je ne pouftais pas.” [René was probably making a joke by saying “pouftais” rather than “pouvais”… but the translation is something like “I would like to, but I couldn’t.”]

Have had some movies in our area the last few nights and it has really been a kick to hear kids laugh at a movie again. Yes, the French kids and adults come from all around here to see our movies, even tho’ they can not understand the talking and even tho’ there are some movies in town a couple of times a week – American made ones now, but in French.

I don’t know how long it is taking for mail to get to you from here so, just in case – I’m taking no chances and am going to wish you a very Happy Anniversary, Mom & Dad…… 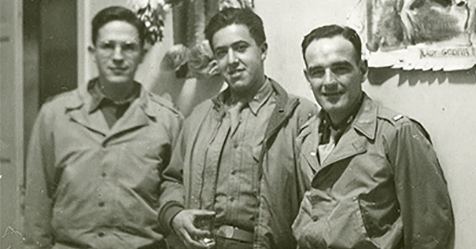 Marv Hodgson (left), René (center) and Cy Kiernan (right) were all invited to dinner at the home of a French family.  Also at the dinner were Carroll Russell (below) and Walt Morduant. 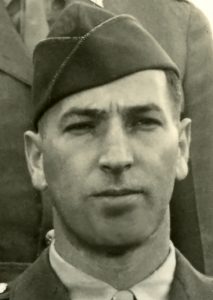 At the end of his letter, René wishes his parents a Happy Anniversary in advance. October 4, 1944 would be their 30th wedding anniversary.