With nothing to do at the moment, a good music program on the radio here in Receiving, a good typewriter un-busy, and never knowing what the next days might bring to cut short my letter-writing for while, guess I might as well pound out a few words to you. In other words, tho’ nothing to say, just felt like writing to you, so there!!!!

Have had some more excellent meals since last writing. Had steak twice in the last few days. The first one came thru regular channels but the ones last nite, with mushroom sauce, were bought with Officers’ Club Mess Fund at the local slaughter house. Both were mighty fine. Our French cooks continue to put out mighty good and tasty things.

Finally heard from George Davis and he definitely should be able to locate Lilice, etc. He’s got the transportation and the gas so all he needs is the time, I’m sure. He’s really got a big job. Understand, too, that Lois is over here somewhere – Fran had a letter.

Took a ride with “Snuffy” after the mail the other day and Mattie went along with us. We wandered around one of the towns but saw nothing of great interest, but we saw some more beautiful country.

Imagine it’s been in the S.F. papers – Phil Westdahl’s brother was killed up in Normandy. He went in on the invasion there and was wounded – that Phil knew some time ago, but he must have died later in the hospital, for Phil had one of his letters to him returned with the info that Dick was “deceased.” Dick was a swell guy, much like Phil, about a year younger. He was with us at Galileo and went to Cal. after that. He was a staff sgt. in the Field Artillery, I believe. 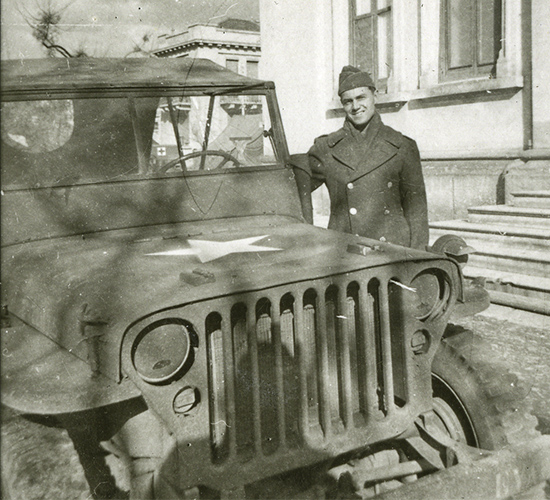 René took a ride with “Snuffy” Thraves (above), and Mattie (Carleton Mathewson, MD, pictured below) went along with them. René tells his parents that they saw some beautiful country.