Yesterday took a ride with Jones and Eddie Welles, going to a fairly large town, but unfortunately Jones had a lot of business that took up our time, and then we spent a good bit of time going to a factory where they make pipes. Eddie and Jones picked up several nice ones and I got one for Dave. By going to the factory we saved more than 50% on each pipe.

Have been surprised really at the amount of things that one finds in the stores of these towns. I had expected that their stock would be completely depleted, but apparently the Germans did not take as much of that type of stuff as we tho’t. We passed through some really beautiful spots yesterday, one in particular where the road comes upon a river suddenly and one can see where it takes a “U “ turn. There was a small dam and a stone bridge over it just at about that point and the whole site was worthy of being painted by the best artists.

Got our stoves in our tents now – Bryner installed ours yesterday and Eddie and I chopped all the wood and hauled the coal to our tent. It was nice to go to bed with the tent warm for a change last night. Personally, with stoves in the tents I’d just as leave stay in tents all the time. I like it, but others apparently do not feel quite the same as I do.

I got a letter from Alain the other day. In case he hasn’t written you, here’s a bit of news that he wrote to me: 1) He heard from Jacqueline who had had to get out of London because of the bombing dangers. 2) He also heard, through the Red Cross, from Monique, dated January of this year, and he gave me her Paris address.

René tells his parents that he took a ride with Jones and Eddie Welles (shown above) to a pipe factory. 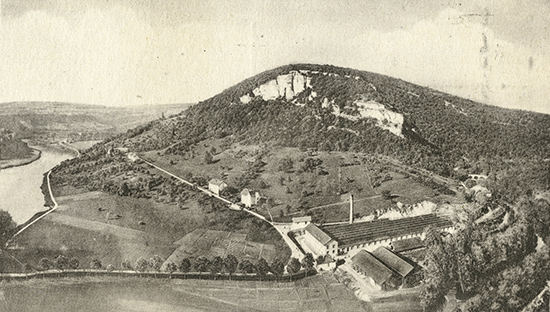 The pipe factory they visited was in Baume-les-Dames (pictured above) near Besancon (below). 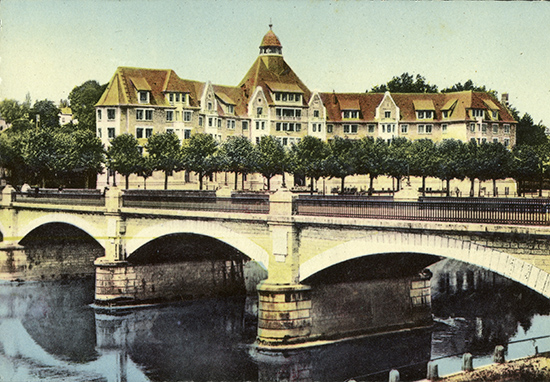 In other news, René tells his parents that Serge Bryner installed a stove in their tent.