I was sure glad the other day that I had my high English-type boots, for there I was in the middle of a river, stuck!! But, let me tell you more about that cute little incident. I had gone over this particular section of road (where there was a bridge out but a very good and dry road-bed that was used as a road) twice, once with trucks and once with jeep.  So, I led Fadley and his group of trucks up to this point the morning after I had crossed it, only to find that it had poured during the night, and that the spot was flooded nicely.  Well, I got through O.K. with the jeep and so did Fadley and so did all the trucks for that matter.  However, as I left Fadley and turned around to go back, the last of Fadley’s trucks having gone off, I got into some of the holes that the big trucks had made, and as a consequence my poor jeep got the generator soaked and she stopped.  Stopped right in the middle.

There were some Frenchmen on one side and I yelled at them to pull me out with their truck, but they didn’t want to even get one wheel in the water.  But they said they would go in search of a long rope to try to pull me out with.  Knowing that it was going to take some time and that Collie would probably send out a searching party for me before then, I did the best I could.  With my handkerchief I took as much of the engine apart as I could, and dried everything in sight.  I tried to start it again and she worked, only to get me just to the other edge and then conk out again.  However, after drying things out once more I was again successful and dashed back to camp.  Those boots-a-wading, in the river, got wet on the outside, but not inside.  As a matter of fact, I only had those boots off for a couple of hours in four days, having pounded the highways to the tune of over 1000 miles in three of those days. 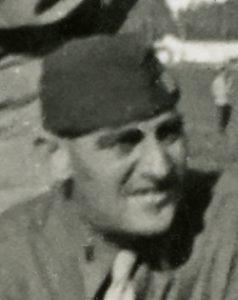 René tells his parents about a “cute little incident” involving Ken Fadley, some trucks and a jeep. 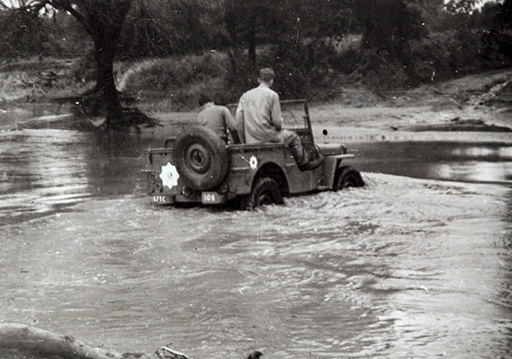 The “incident” involved René getting his jeep stuck in a river when the generator got soaked. It might have looked something like this.