Last night Bob Treadwell, Fran and I were invited to dinner by some Yugoslav officers for whom we have done some things. Lois was working anyway, but not knowing how great were their facilities, we three went alone without Lois and Hal. It was a most interesting evening. They are well educated men, having been educated in both Paris and either Oxford or Cambridge. A British Captain was there for dinner also and he was likewise most interesting. One of the men spoke only Yugoslav and French, so I was able to give my French an airing and amazingly enough I think I did darn well!

Strangely enough, also, one of the men was an ex-violinist who had heard both Mischa and Toscha at different times, but surprisingly enough, not Yehudi. They are all, including the British officer, coming out here Wednesday night to visit us.

A couple of nights ago when we returned from a jaunt downtown, Lois walks into the dining room and almost falls over when she sees a friend of hers from St. Francis Hospital. This gal is with a General Hospital considerably back, but they, the lucky bums, get leaves varying from 8 to 14 days, and this gal got a plane ride to Sicily and dropped in on us. They had quite a time with “Old Home Night”, but unfortunately with Lois working nights, she did not get too much of an opportunity to be with her.

I wish I could write down all the funny things that happen around here from day to day, but somehow, when it comes to writing them down, my mind does not remember all the things we laughed at during the days. However, I had a prize today. Yesterday a horse wandered into our area and then proceeded to lie down and die before anybody noticed him. Then, the problem of getting rid of him came up, and, as usual we were given the run-around from all the various offices — somebody said to bury him here on our grounds (obviously nuts); somebody else said to call the food ration dump; then the Civil Affairs bunch said they would find out and then proceeded to do nothing as far as we can gather. We were all for taking him down to the headquarters building and dumping him on their steps, but I think that the boys got conservative finally, and took the poor horse out to some last-resting-place.

Lois’ goofy ward-boys had her going round and round last night. She made herself a cheese sandwich and then the boys came around and each in turn, while the others weren’t in the room with her, told her that the piece of cheese had been lifted by one of them off the floor because the cock-roaches on it were getting too sick from eating it. She didn’t know whether to believe them or not. 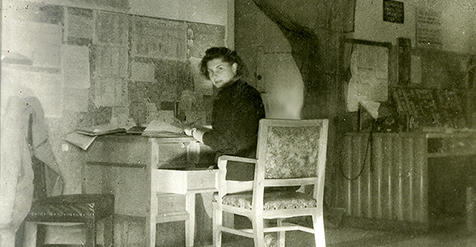 A nurse that Lois knew from St. Francis Hospital in San Francisco is visiting Sicily, but, René tells his parents that “unfortunately with Lois working nights, she did not get too much of an opportunity to be with her [friend].” The photo above shows Lois working the night shift.

Unbeknownst to René or his parents, his beloved French cousin, Yvette Baumann married Jean-Guy Bernard on October 8. In this photo, taken on their wedding day, Jean-Guy and Yvette are the couple in the middle of the group of six, one of whom was the mayor of the town who performed the ceremony. Yvette and Jean-Guy were both important members of Combat – one of the Resistance groups working in France to defeat the Germans.