Last Thursday was Thanksgiving. And what did we have as a Thanksgiving feast? Had chicken instead of turkey, but the chick was mighty good, and along with it went stuffing, sweet potatoes, peas, cranberry jelly, apple pie, cheese, nuts and hard candy. ‘Twas mighty good and, despite the fact that we were still in the U.S. last year at this time, our meal here was far and away better than last year’s. What a difference there is in eating chicken like that, as compared to the canned boneless chicken. The latter is swell eating until the real thing comes along.

Somehow the turkeys didn’t arrive in time, but for supper tonight we are feasting on those birds. Lois and I are hoping to be first in the mess line tonight for first comes first served, and there are only a certain number of drumsticks!

The Officers’ Club scheduled a swanky party for the 20th and swanky it was. We opened up one end of the hall and used the amphitheater, besides all the rooms that we ordinarily use. Had a swell band playing and had the stone steps in the amphitheater covered with blankets so they could be sat on without having cold bottoms. The regular bar and room adjoining was used as usual, and what is ordinarily the card room was used for “Free” Punch, nuts, cheese and sandwiches. What is ordinarily the radio room turned out to be sort of a stag room, but others of us also made use of it.

For a while, however, Lois was the only femme in the room – a special member! Somewhere Pete had found five turkeys and after they were duly inspected by the Veterinary Corps, they had been cooked and sliced and made into sandwiches for the party. The boys who made up the sandwiches in some of Ehrbacher’s special buns did not calculate too well, and as a result there were several who were cheated out of the turkey and had to be satisfied with hard-boiled-egg sandwiches. Trust us, however, we were among the first in line and got our share of turkey alright.

The whole place had been beautifully decorated with fancy-colored crepe paper. Even the ceilings were decorated with hanging paper, and all walls had paper hanging down from a good height. Besides this, they had some figures that they fashioned out of cardboard and paper — a big muscle man lifting 500 pound weights, and a couple of other figures. Then there were the so-called paintings (actually sketches with some crepe paper in appropriate places as garments of a sort) — paintings of Venus, Cleopatra, Lady Godiva, etc. These were really something and added a lot to the decorativeness of the place. How did we happen to get so fancy, you ask? Well, Kuzell somehow ran into some boys from a camouflage outfit, and they really did a fine job of camouflaging what used to be an orthopedic clinic into a right swanky Officers’ Club. (The best in town, so they all say!) The chief decorator for this outfit was Cecil B. de Mille’s special set-decorator, so naturally you could only expect an A-1 job — and he’s only a sergeant at that! All in all the party was quite a success.

Photographs from the “Swanky Party” at the Officers’ Club. 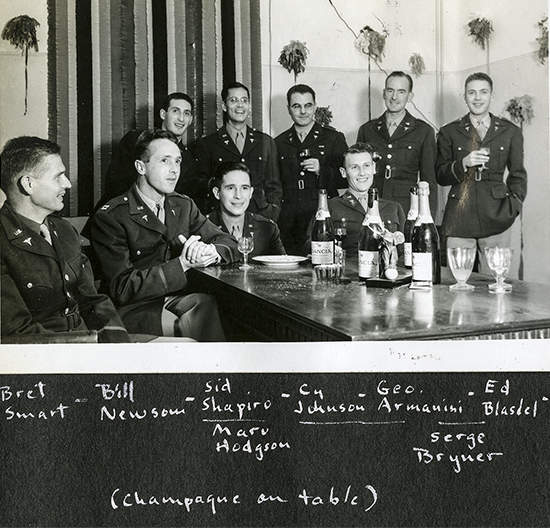 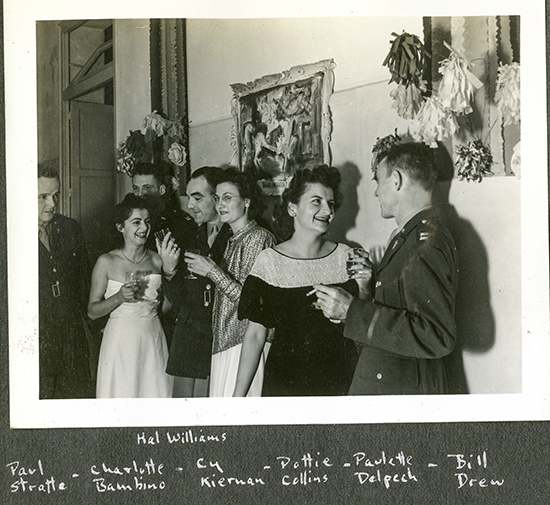 Paul Stratte and Hal Williams in the back (partial views) 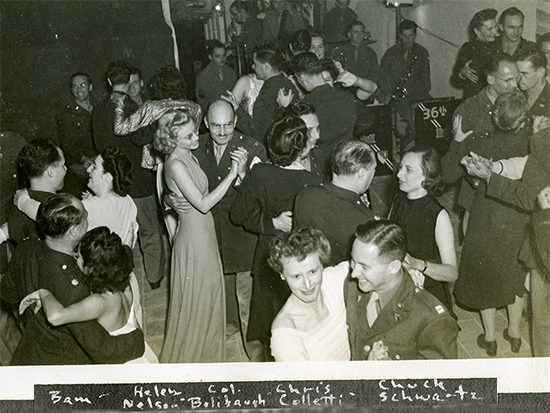 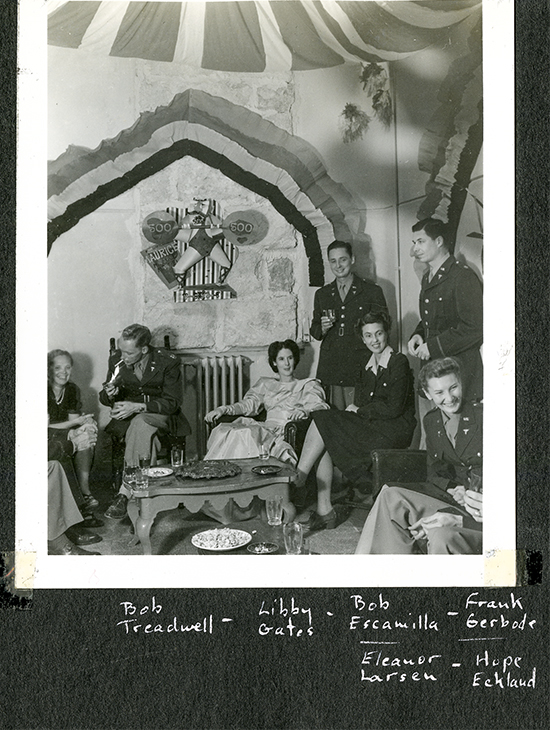 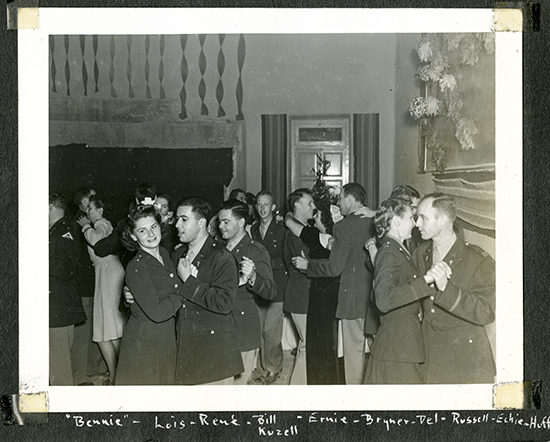 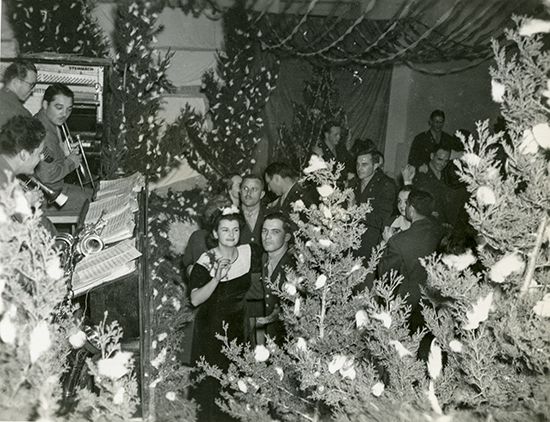