Here is your very bad son again, being most repentant for not having written. Please forgive me!! Have no particular excuse except that we have been admitting some every day instead of every-other day and as a consequence it has seemed that every time I sit down to try and get a letter written, what happens, but that mere act seems to bring business in on top of my head.

We have been kept plenty busy in the dispensary as our next-door neighbors, tho’ supposedly rather settled, are not able to handle their regular work plus the out-patient stuff that comes along, the latter being particularly of the VD type. As a consequence we have been doing practically all of the out-patient work around here and this office has been kept on the go almost continually during the day. Nevertheless, we still do not compare in business to Lois and her department.

I mentioned before that we had received numerous packages, well, we did not have the self-control that I thought we might have, and anyway, rationalizing, we decided ‘twas much better to open packages as they came rather than save them all for one big opening. Who knows what might happen on that one big day? Remembering last year, but not anticipating anything like that this year, we still felt that, well, one never knows, does one? Sooo, anyhoo, with edibles for instance, ‘tis far better to eat them as they come rather than get a stomach ache eating everything all up at once, particularly if one had to do all that eating to lighten one’s luggage as one ran for a boat. There is actually no prospect of that, as far as we know, but, as I said before, one never knows, does one? Anyhoooo, we rationalized, and we continue to rationalize, and consequently before this letter is finite I will have gone into a long dissertation on the presents received and attempt to thank you all, one and all, for the wonderful things you have sent us. Only wish, as I know you do too, that there would be no such presents – but instead that the only Xmas present would be for all of us to be together – but, maybe on the next one! 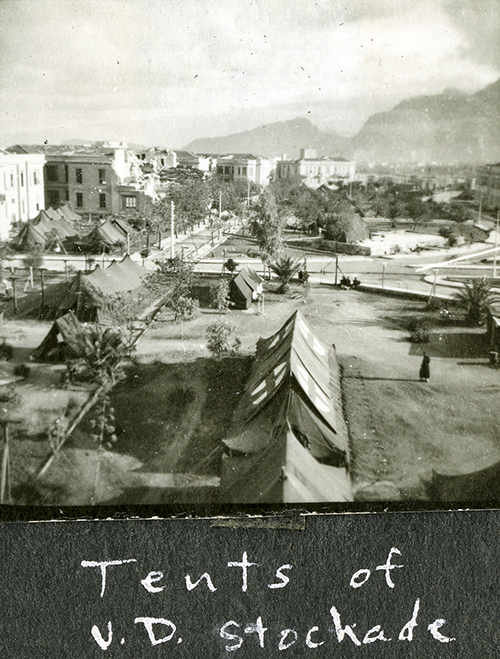 René is handling practically all of the out-patient work, including the VD cases, in addition to working in the dispensary.