I have been going steadily today, except for a slight interlude, luckily, when George Davis showed up – much to my surprise and joy. George arrived with an MP Major friend of his and stayed around for a few hours, going over and getting Major Kay Barber and bringing her back to Fadley’s office where we indulged in Cerfie’s fruit cake and the wonderful canned chopped olives.

Oh, yes, George got his Majority! He looks fine and tho’ he still has some roaring in his ear and some infection due to a mild chronic cold – I gave him a free ENT exam – he is O.K. He had supper the night before with Lois and had also dropped in to see Bill Reilly for a second.

As yet he hasn’t had a chance to get away from his office to go as far as to visit Lilice, etc., but he thinks he will be able to before very long. His MP friend is going to try to look up Jean-Pierre too.

George is riding around in a swell 7-passenger Chrysler sedan, about a 1939 model, and he has a French soldier as a driver for him – a fellow he has named “Big Stoop” because he looks exactly like the character of the same name in the “Terry and The Pirates” funny paper serial. Of course, the Frenchman cannot understand any English and George does not call him that to his face, but when I saw him I agreed that the characterization was perfect – about 6 ft. 7” tall, and when he sits in the car driving, despite the roominess in the front seat of those Chryslers, the poor guy has to look out between his knees to see through the windshield.

George, after his French classes in Africa in the early part of this year, is at least able to talk some to the driver, but usually when he wants him to stop the car it is about ¼ of a mile past the place he wanted to stop at before he has figured out what the word for “stop” is.

Have again changed shifts and we really took a beating this time on the change. We were supposed to work just to 4 P.M. yesterday, instead of 8 P.M. and then go back on at midnight to 8 A.M. and then off today until 8 A.M. But as usual, the “Greene Gang” or as Russell calls it, the “Gang-Greene” got stuck with a dilly just before we were supposed to go off. Yes, at 3 P.M. yesterday we get a guy with a sucking chest wound who also had a fragment go through his diaphragm, go in and out of the cardiac end of the stomach, almost cutting the whole stomach off, and then going to the spelenic flexture of the colon, in and out there and from there we know not – did not find the piece, but no more holes in his gut — so we were just finishing him at 8:30 P.M. Just barely got to sleep and then had to get up at midnight.

I slept today, thank goodness and ‘tis now 6:30 P.M. and will probably start at 7 P.M., as we have a case from the ward that has to be attended to before tackling the incoming stuff.

Received just now – the package from Mom with jam and Hersheys and the stuff for kids. Tanks a lot. For now nothing more— 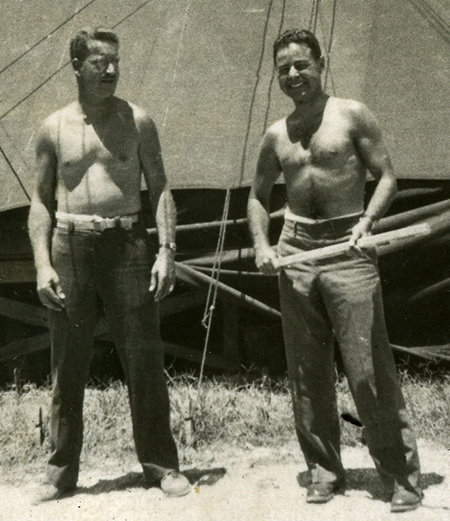 George Davis (pictured at left above with Roy Cohn, back in Casablanca), got his Majority and stopped by to pay René a visit. 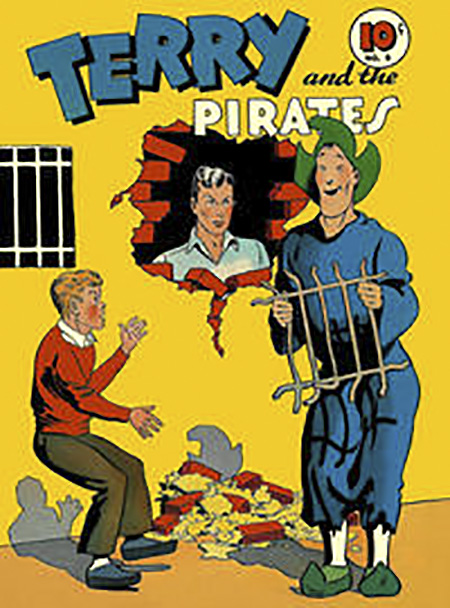 René tells his parents that George Davis secretly calls the very tall French soldier who serves as his driver “Big Stoop” from the “Terry and the Pirates” cartoon.