Had a visit today from a Major Kay Barber. She is a good friend of George Davis and the head nurse of a hospital that is not too far away. She had seen George a couple of weeks ago and knew that if she was nearby here and didn’t drop in to see me, George would never forgive her. Was sure glad to hear that Geo. Is O.K. and that tho’ he was up to his neck in work he was going to get a bit of time one of these days to try to see Jeanne and also to get to see us here. He apparently has a whale of a job and is snowed under by work.

Before I forget, I received your package with the things for the kids – also Bobsy’s with the crayons and paints. Thanks a lot – I hope I get to see some of our cousins’ kids to give them to them.

The “59th Boarding House and School, Complete With Home Cooking, French Chef, etc.” is at it again. We continue getting many visitors who have heard of our French Chef and also we have the gals giving pointers to newcomers while the latter work helping us all over the hospital gaining valuable information before they get their teeth into the business with their own gangs.

One of our boarders is 2nd Lt. Ellerson– 8 years at Cottage Hospital in Santa Barbara, 10 years at Sacramento County and more recently at Ft. Mason in the Army – does anesthesia all the time. And yet she was most interested in watching us do the numerous intra-tracheals that we have been doing, as she never had found it necessary to do one and consequently had never done any.

And speaking of intra-tracheals, it does seem funny that in S.F. whenever it became necessary to have an intra-tracheal anesthesia given there was always a big hullabolu and either Bill Neff or one of the other two or three anesthetists in S.F. had to be called in and then there was great ceremony etc. Here, Paul and I have done probably from 1 to 3 a day, and goodness knows how many Hamilton has done. In fact, we have the nurse anesthetists doing them now very well.

Have had some rather funny incidents occur recently, sort of at the expense of the kids recently overseas – and I do mean recently. One that came into our ward with both tibias fractured and a bad os calcis fracture also, was asking Russell whether he was going to be sent home. Carroll said, “Sent home – why, what do you mean?’ The kid, only 19, came back with, “Why, I understood that with injuries like mine they send you home.” Carroll said, “Heck no, why, what will happen to you is that they’ll probably make you a corporal or perhaps even a sgt. and send you right back to the front. Some guys even get to be staff sgts when they were wounded!” The kid took it all in and didn’t know whether to actually believe Carroll or not. Of course, he’ll be going home, but what Carroll said has actually been true – tho’ with wounds just a trifle less severe than that kid had. 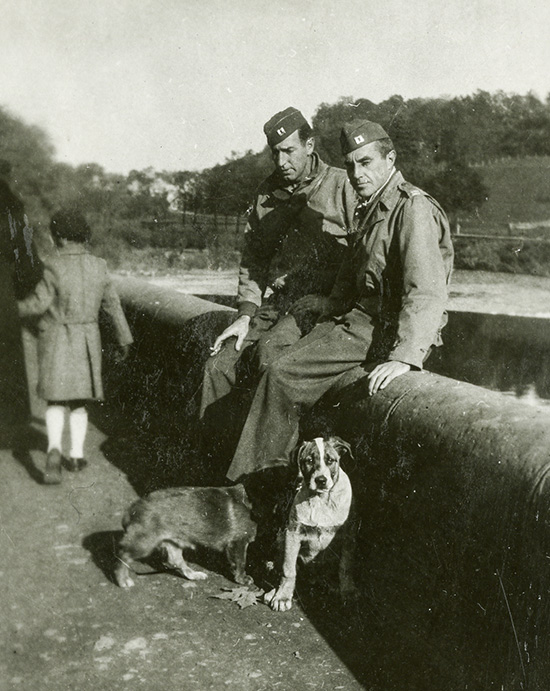 René tells a funny story about Carroll Russell – pictured at left above, with Nelson Bell along the Moselle River.