Sunday afternoon, after having written to you, I went into Pickett and stayed overnite there. Lois and I went to a movie, “Now Traveler” with Bette Davis and Claude Rains. It was very good – rather on the psychological side, about an unwanted child, but very interesting and worth seeing.

Sunday morning I came out here early with the ambulance so that Paul could go back in and get there in time for church. Had sick call here, which was awfully light – the men are rarely sick when there aren’t any special duties and no marching or drilling, etc. during the day.

Late that afternoon Willie (Lt. Ed Williams) decided he had to go into Pickett with some mail. As there was nothing doing here we left Lt. Srouffe in charge of the Camp and the Dispensary and set off in a jeep. After mailing some letters in Pickett, we decided to go over and see if Paul had by chance cooked up a little party for our special night club on the lake. Yes, he had, so we completed a few arrangements, i.e. speaking to Lois and Bam for dates for Willie and Srouffe to be gotten, and then Willie and I headed back.

Coming back we checked on the telephone line and followed it along the small bumpy roads that it took. What a ride we had – over bumps, through puddles, etc. We came to one bump that looked as if it was benign and Willie thought it was O.K. – looking out of the side of his eye as he watched the telephone line that was on his side of the road at that point – we hit the bump and the front of the darn jeep rose in the air like a bucking bronco and we went about 3 feet off the seat, but landed back in the same seats we started out in. ‘Twas really funny – reminded me of riding in old Betsy at Feather River.

That night, after dinner, Srouffe and I went in in a command car and picked up Paul, George Sterba, Bam, Lois, Fran Trembley, Gert Brazil, and Ann Dunn. We all came out here, went boating on our private lake, with no more illumination than the few flashlites we had. It was a clear night, but no moon, and it was most impressive being out in the middle of the lake looking up at the stars and every minute feeling the boat fill with more and more water. We had a scarcity of bailing implements and by the time we got back to shore most of us were wet in odd spots.

In our little “nite club” we had Srouffe’s radio, so we danced for a while after the boating. We also got our water mill working to show the gals who were new to our “club.”

The party was also sort of a farewell to George Sterba, as he is leaving our unit. He, as you know, has been our Supply Officer ever since we left Ft. Lewis and is a swell fellow – he spent some evenings in N.Y with us, He and the Col. have agreed to disagree on many points and as the story goes, the other day the Col. said something about his inefficiency (he is far from inefficient as many will testify – in fact he has done more work around here than any of the other office boys). Sterba had some weeks ago put in an application for a transfer back to Field Artillery where he originally had been before being shifted to Quartermaster Dept. a few weeks before joining us. Anyway, because of the Col. and the other members of the Big 3, he had wanted to be out of the mess.

Well, the Col. has vetoed all attempts of Sterba and others to transfer out of the unit, but after the altercation a few days ago he apparently decided to approve the transfer. The Officers’ Club of the 59th gave George a swell pen and pencil set at lunch the other day and the ovation he got from everybody (except the Col., who sat there with just a supercilious grin on his face) was really something, and touched George considerably. We now have a fellow by the name of Davis, in George’s place.

Well, to get back to Sunday night. We all stuck around the lake until about midnight and then drove back to Pickett and finally back here. Oh yes, we ran low on gas, so Sterba (being transpiration officer besides supply officer) gave Srouffe some gas from one of our jeeps – transferring it to the command car so we could get back out here. While the exchange of gas was going on, Paul went snooping in the 59th kitchen and found some freshly baked pie. So, we all went in and had a quarter of a pie apiece – nice apple pie, fresh and warm, before coming back here.

Last night there was some excitement around here. The Post Exchange that has been set up in the old house behind our dispensary, was robbed. They had about 200 dollars in a strong box about 2 ft. square, on the top story of the building, and when the generator for the lights when haywire for about 10 min. the whole box was apparently lifted. Whoever took the money must have know where it was, so it is highly suspicious that it may have been an inside job.

After the robbery was discovered, all the guards were put on extra alert duty, the guards doubled, and we heard nothing but challenges around here all nite. However, they did not find the culprit, the money, or the cash box.

We finally got to sleep despite the noise from the guards and the wind blowing through our tent like a gale, every so often. In fact, at one point we thought the tent was going to take off and go sailing into the air, but when we awoke the tent was still over our heads.

Whereas it had been warm last night despite the wind, this morning Housely and I hardly wanted to stick anything more than our little fingers out, as it was freezing cold. We finally jumped out and dashed over to the dispensary tent after throwing our clothes on, hoping that they had their fire going. We had run out of kindling and couldn’t get ours going. Luckily they had theirs going and we warmed up in a hurry – got the dispensary in action and saw all our patients.

We apparently are “hot” again, we have a new number and it looks as if the 59th is on the move again pretty soon. Oh yes, the men are having very good experience turning in clothes and the like. I’ve lost count how many times they have had summer uniforms, but now they have turned them all back again, as of Monday. You figure it out!!!! 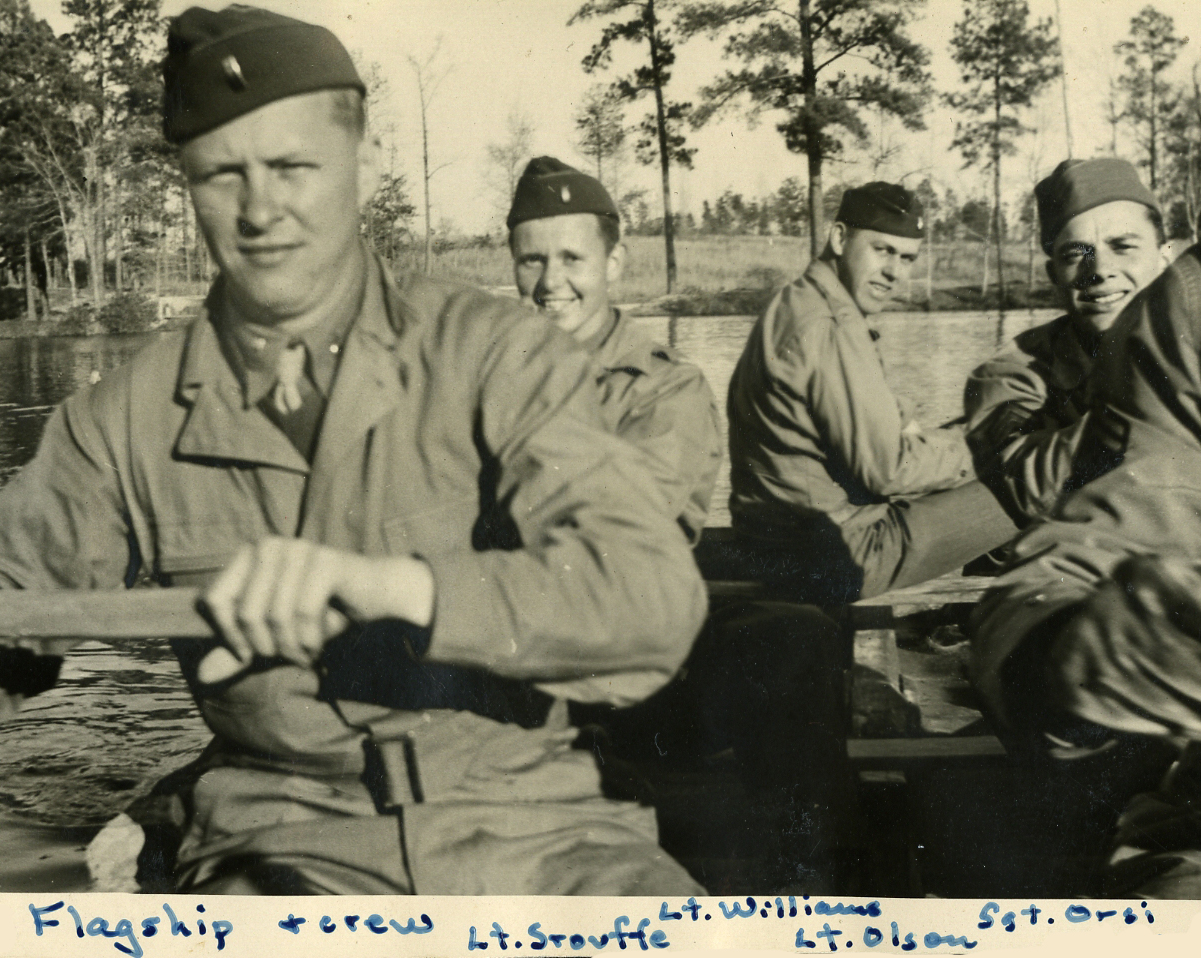 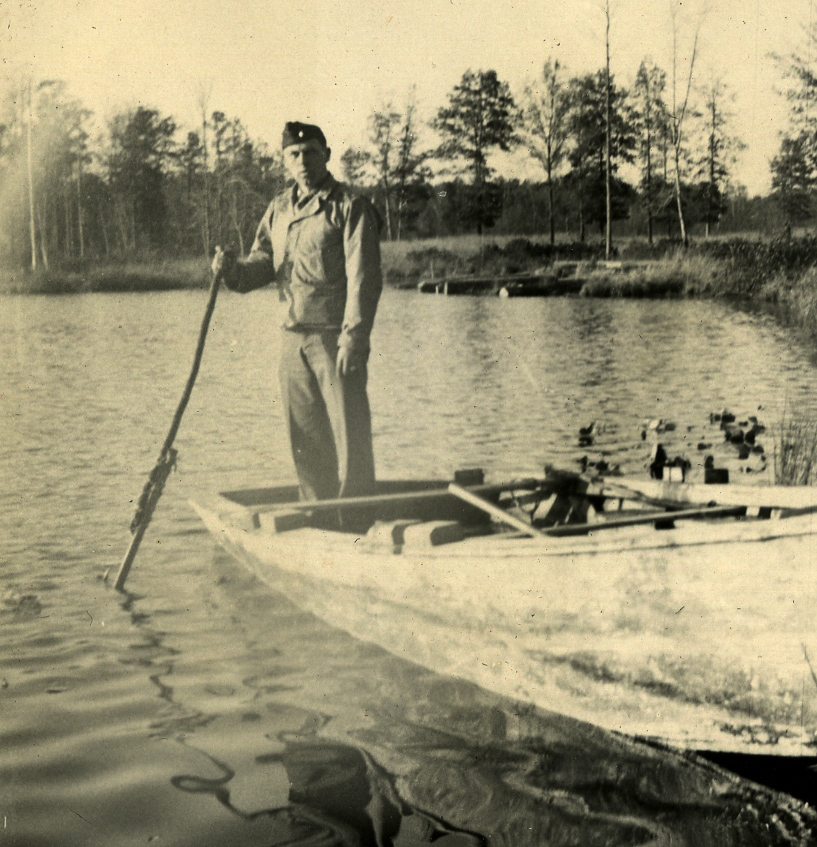 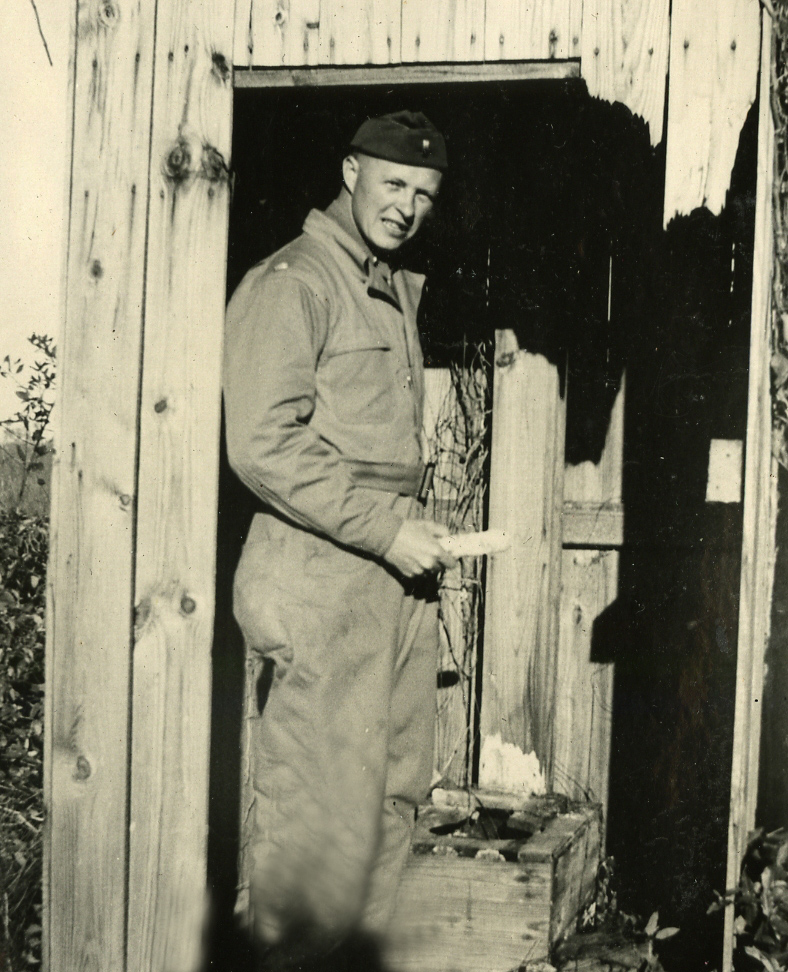 Lt. Srouffe posing in front of an outhouse they encountered out at Twin Lakes — complete with corncobs.