I agree with your feelings regarding the Jap situation. One cannot help but have a certain reservation in one’s mind when thinking of them as a whole group, for there are plenty of Japanese-Americans fighting just as hard as the rest of the Americans. There have been a large number over here and I had several as patients with so-called “Trench Foot,” and they were a swell bunch.

The business of killing is certainly different in the two theaters of war. Over here the attitude has been one more of contempt for the Axis more than anything else. Of course, during the African and Sicilian and early Italian campaigns, this contempt was strongest where the Italians were concerned; but, too, when prisoners were taken and the Nazis still thought that they were the “Master Race” and wouldn’t believe that New York hadn’t been bombed, that Bizerte had fallen, etc., there was a contempt for their gullibility besides. How the feeling has changed with the change in situation — the stalemate in Italy, I know not for we have seen no prisoners in a long time ourselves, and about the last casualties we got were from Volturno.

Wednesday night I walked to the show and saw a stinker, “Best Foot Forward.” The theaters are really pretty crowded these days — filled mostly by the 59th. If anyone should yell, “Is there a doctor in the house?” there would be a riot. Or if one should ask that all members of the 59th stand up, there would be darn few left sitting. Many of us walk to the theater, as it is still light until after 8 P.M. now. But then the walkers and the riders have a devil of a time squeezing into the one truck on the way back.

Yesterday the boys had a rip-snorter of a baseball game. It was a top-notch game and, by golly, they won! It took 12 innings to come out on top, however. Al Maidens pitched the whole game and he pitched a beautiful game. He isn’t the finished pitcher that Paul Breudigan is (the latter has played a lot of baseball), but he did nobly and, in fact, practically won the whole game by himself, stopping a lot of balls in his territory. He surprised everybody in being able to last the whole 12 innings. He was actually getting a big kick out of it. He told me afterwards that at the end of the second inning, he thought he was going to have to quit, for his arm was mighty sore, but as the innings progressed his arm warmed up and loosened up and by the 7th and 8th innings, he was really in top form. He said he could have gone some more innings after the 12th. I got slightly toasted at the game, for I left my shirt off the whole time.

Last nite, went to the Nurses’ Anniversary dance – most of them in just 2 years now. Bette Holms’ boyfriend went back to Italy just a couple of days ago and so she asked me. It was a pretty good dance, but lacked something. It was given at the hotel downtown and I think that there was just too much room – everyone was spread around in three or four large rooms and there wasn’t the life or the hilarity that usually is present at a 59th party. The band was good, a 14 piecer, and they had a very fine glee club singing, and also a very good singer – a sailor. And, you might have known it, the sailor turned out to be a Stanford boy, one of the old Stanford families, in fact – a footballer by the name of Ward Tatum.

Tonight we are having another “Jolly-Up” and then tomorrow A.M. calisthenics!! 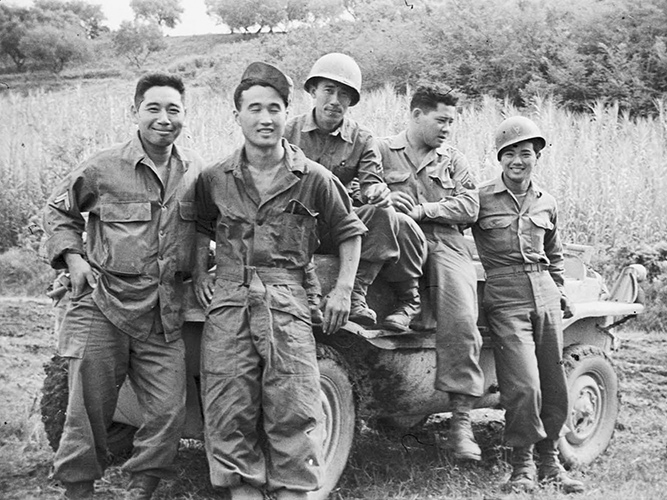 René comments that the Japanese-American soldiers fight just as hard as the rest of the Americans. He said he has had several as patients and “they were a swell bunch.”

Bette Holmes invited René to the Nurses’ Anniversary dance – since her boyfriend went back to Italy a couple of days before.

Dr. Philip Westdahl writes in his journal that on May 5, the 59th Evacuation Unit officially turned the hospital over to the 154th station group.