‘Twould be rather difficult to try to describe this place to you or to try and give you an accurate picture of what has been done and what we are now doing.  The camp itself takes in something like 15 square miles, i.e. with the two nearby camps included.  We are living in one of the houses that belonged to the SS officers who ran the camp.  This row of houses along the street before one enters the camp itself reminds me very much of the officers’ row in the Presidio.

There are about 25 of our men here and seven nurses and Dickie (the dietitian).  There are now 11 of us officers here: the Colonel (the Camp Surgeon), Roy Cohn and Sewell Brown (his two assistants — Roy actually acting as Exec to the Col. and Brown running the Medical end, the shifting of patients, etc.), Bell (the lab, water purification, etc.), Bishop (acting as Medical Supply officer), Schwartz & Malone (running the dispensary) Kuzell & Newsom (running the “Outer Camp Hospital” — Kuzell commanding and Newsom as the consultant for the Polish and German doctors that do the work), and now Pete and myself who have just finished setting up our hospital.

Ours is really not much of a hospital, for the patients are merely convalescent cases and require little attention.  Our problems are mostly administrative, and supply — getting beds and blankets etc., for them, setting up a mess hall, getting the food, keeping other groups from stealing the equipment that is supposed to be ours, getting prisoner details to work and clean up the place, etc. ad infinitum.  The day we started to work (i.e. the day I came back here) we already had more than a hundred inmates and now it is a few hundred more.

Things now, in the whole camp, are fairly well organized.  It must have been a mess at the start when there were many thousands more inmates than there are now.  How the Peace Conference in San Francisco can get anywhere is beyond the ken of all of us, however, for in a place like this one would think that all groups would be united after all these years and that there would be a minimum of friction between the groups representing the different nationalities.  But, no, the jealousies and squabbles are innumerable.  Thirty-one different nationalities are there — what a conglomeration!  Of course, too, there have been all sorts of committees going through here — senators, Swiss Red Cross, etc.

The things that went on before this place was liberated have been brought out, no doubt, in most all papers and publications.  The evidence is all here — we’ve seen it, heard it, seen documentary evidence, and about all we can say to you is: Whatever you hear or read about this place and others like it, you can unhesitatingly believe every bit of it and more.  The conditions that existed here were almost beyond imagination, but seeing is believing…the gas-chamber, the incinerators, etc.

In this place they had everything.  The SSers had the prisoners making all sorts of things — there are all sorts of factories within the area, and darn near any kind of equipment can be found in great quantities.  The most interesting shop is the carpentry shop where the “slave labor” did wonderful work….

When the Col. and the gang were first brought in here to run things, everything was in a mess. There were two of the new evacs (127 and 116) running separate hospitals within the area and there was another hospital in the inner compound and then the former SS hospital in the outer compound. These latter two were being run by gosh knows whom. Now the inner compound hospital is run under the Col.’s jurisdiction by some officer whom I have not met. There are three other camps nearby, which are being run by other units, Field Hosp. and Provisional units, but it is all under the command of the 59th group.

The biggest problems initially were to get adequate housing — i.e. not with a hundred per room that was meant for 20; get them fed; and get those in need of hospitalization where they could be cared for.  The deaths at the start were appalling, but now they are at a bare minimum.  Now typhus cases are rare — DDT having been used more than freely in all buildings and on all personnel and patients.  The rate of evacuation of these people back to their own countries has been rapid these last few days and things have dwindled considerably.

The Typhus Commission (some of the men with whom we had had contact both in Africa and Italy) has done a lot of work here and two of our nurses (Clarkie and Dottie Merrell) have been working with them, taking temperatures regularly, giving the medications, etc.

When the people were liberated from the compound they just ran helter-skelter through all the workshops and warehouses and consequently equipment is scattered all over the floors and broken up, etc. in those warehouses where formerly the equipment was nicely stacked on shelves.  It ‘twould be hard for you to imagine how this place really looks.


In speaking of Dachau, René tells his parents, “Whatever you hear about [Dachau Concentration Camp] and others like it, you can unhesitatingly believe every bit of it and more. The conditions that existed here were almost beyond imagination, but seeing is believing…the gas-chamber, the incinerators, etc.”

Editor’s note: I have included selected photographs of Dachau from René’s album in this and upcoming posts. However, I have reserved the most graphic and disturbing photographs only for those readers who choose to view them by clicking HERE. 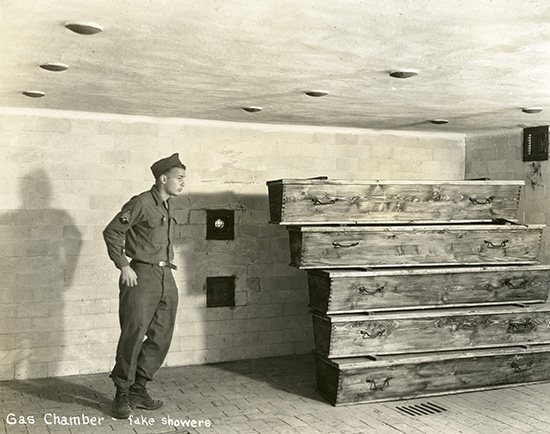 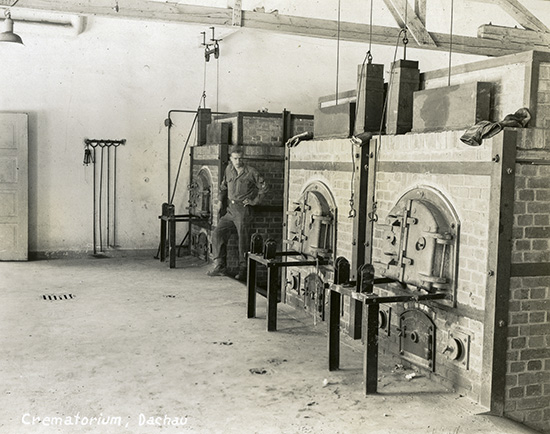 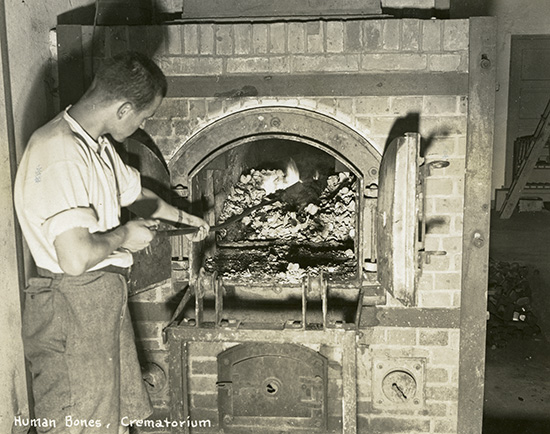 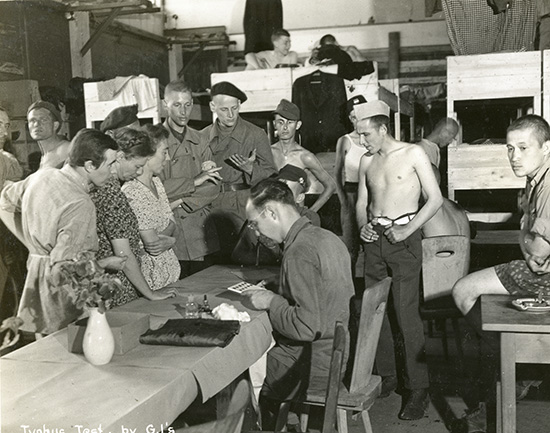