No mail in over two weeks now, so none to answer.  That, of course, is all screwed up again and if we get all our mail up to date within the next month it will be a miracle.  What with two moves in as many weeks, the mail is having difficulty finding us.

Where are we?  Oh, yes, somewhere in Italy!  After sitting around a few weeks in Sicily doing nothing, another outfit took over.  Then, our so-called “advance party” consisting of the Col., Collie, Gerbode, and most of the nurses, took off in a liberty ship. As soon as they landed, the nurses were farmed out to different hospitals in the area, Gerbode went to pick out an area for us to move into, and the other two brain-storms proceeded to put some 600 miles on the odometer of the command car in the three days prior to our arrival.  They toured around, seeing Pompeii, Vesuvius, Italian ruins, museums, etc. and even failed to report in to the official offices to let them know that we had or were arriving.  A fine advance party!

We had a nice trip over ourselves, but those boats are really dirty.  When we landed we were immediately put on trucks and shipped out to bivouac with a small clearing outfit near the area where we were to set up.  This time it was a little different than when we landed in Africa, as we were smart enough to pack our own sleeping bags along with us and not have them in the hold of the ship.  We sat out in that area for three more days before the Col. even deigned to come out there and see us or find out what was going on out there.  Bishop and Jones got hell from various offices for the Old Man not having reported in and then the Old Man even gave them the devil because they hadn’t done the thousand and one things he wanted done the first day that they arrived.  In fact, they had even had to hitch-hike some 40 miles to town to get to where the offices and the docks were to get our stuff unloaded; and they had no sooner arrived than they caught hell from the Old Man.  What an outfit!

We had the engineers set up our supposed new area, put in roads, etc., and before we had started to move in at all, the orders were changed and we moved up to where we are now. Down where we sat for almost a week, we ran into our old pals and enemies who were the first hospital to get into the section of Africa that we landed in a year and a half ago. Having not much to do there, Chappie and I did some hiking on a couple of the days and then I supervised the unloading of part of our equipment that came up by train before the orders changed. Had a chance to practice French as we had some French truck drivers working for us. At the clearing company where we were staying they had practically all French patients, Goumes, etc. and they were for the most part brought in by French female ambulance drivers.

We moved by truck in four groups finally, after the same “advance party” came up here to mess things up a day ahead again. I was among those in the first big group to come and we were most heartily greeted by Bert Halter, who looked swell, though thinner and a bit tired out. They had been on the go for some 10 days and had had more than enough to suit them. 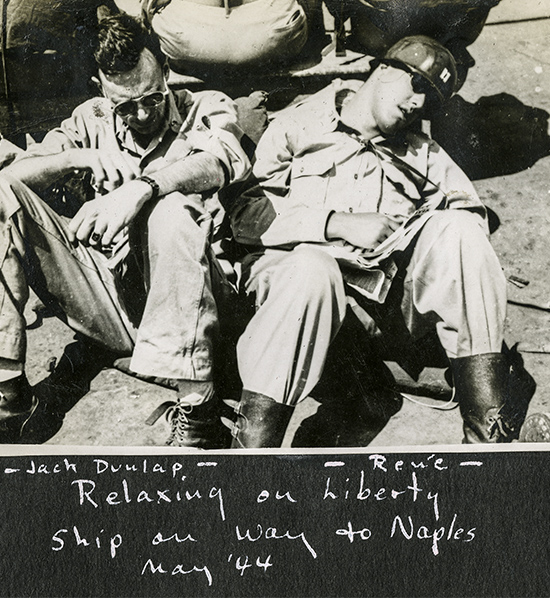 René said that he had a “nice trip” over from Sicily to Italy, “but those boats are really dirty.” Here he is asleep on the deck of the Liberty Ship alongside Jack Dunlap. 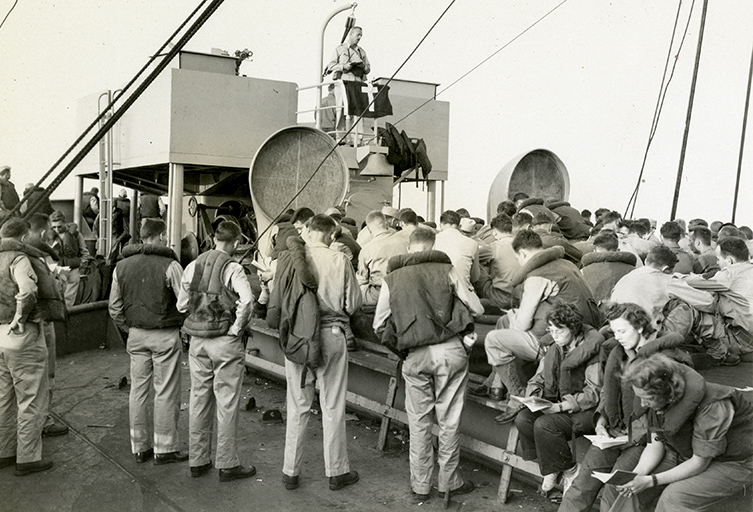 Onboard a Liberty Ship from Palermo to Naples. 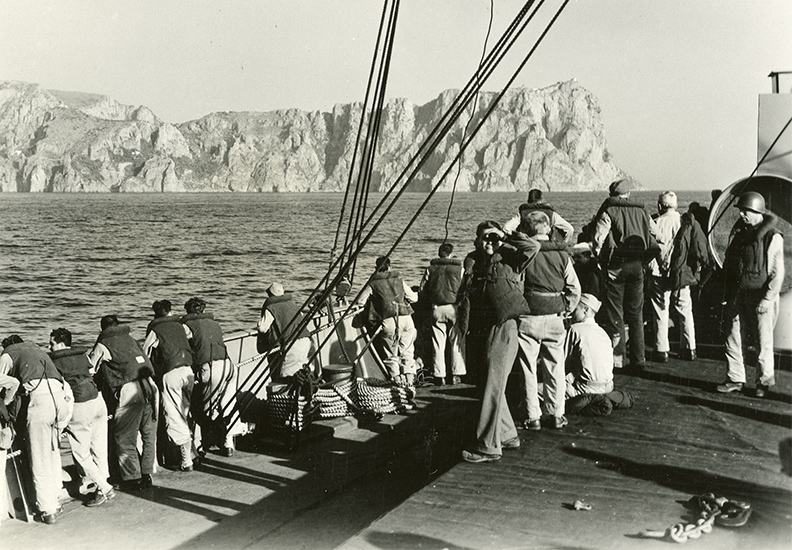