The next day we heard the Invasion [D-Day Invasion of Normandy] had started and were sort of griped to be sitting here and being attached to another bloomin’ Base Section again. We are supposedly a part of another Army in another section, but so far that army hasn’t shown any signs of doing anything.  We had a big pool on the date of the invasion and I missed it by only a few hours, having bet on your birthday Dad.  If the weather hadn’t been bum and delayed the invasion 24 hours, I would have won the $167 we had in the pool.  Hope everything goes all right up there in France!  It would sure be nice, though damn near impossible, if things went as well there as they have been going here in the last week.

That day we ran into numerous friends in our vicinity, including Leon Michels. He looked fine, well-fed and healthy. Two days after Rome had been taken, Leon and I took off starting out just to see a nearby town.  But we got a ride from a fellow who was going up near Rome, so naturally we couldn’t refuse the invite and had quite a ride, but succeeded in visiting there for just a few hours.  A few of the other guys managed to pull the same trick the next day.  We didn’t see the Vatican, but managed to cover quite a little ground, seeing the Coliseum, the King’s palace where Mussolini has held forth and fifth.  We bumped into some other medics whom Leon knew, and found that they had walked into a German Hospital while the Germans’ food was still on the tables in their officers’ mess.

We had a good meal in one of the best restaurants in town. That place is certainly in marked contrast to anyplace that we have so far been. The city is clean, not damaged at all, people are clean, clothes washed and they are clothed, even the kids; no beggars or street urchins.  It was all rather amazing to see.  I wish we had more time to stay there.  There were two parades going on while we were there, one by some Scottish Highlanders band and one by an Italian Army band.  Quite the stuff, eh? Bumped into some friends we had known at Ft. Ord, Lewis and other points.

We have been mainly acting as a transfer station, more than anything else, but have had a few first-hand things to do. I was working with Roy and Russ Klein on the critically ill surgical ward, but tomorrow am shifted to a medical ward. I’m plenty mad, but they do not have enough business to warrant another officer there now. That’s why I’ve taken time now to write – to hell with the ward!

We had two good U.S.O. shows here in the last few days — before we really got going.  They were the first shows in this area despite the many months that outfits were here.  Of course, they may not have wanted them here because that would mean large gatherings, which would be dangerous, and anyway they really didn’t have the time for them.  I saw Marlene Dietrich, who was no good, but the Master of Ceremonies, Danny Thomas from Chicago, was very good.

The other show was far better, it was excellent in fact — put on by a New Zealand U.S.O. outfit — a rather large group, very good band, fancy drapes on the stage, good sets, and the prize finale: an opera take-off with fancy costumes, swords, the usual non-understandable rigmarole, and the usual final death scene. They all died!  Means of self poisoning: Atabrine!

I had quite a talk with Bert Halter. He may possibly be going home on the rotation deal. His mother is dying. She had cancer of the uterus removed a year ago, but just recently developed a cancer, primary, of the sigmoid. The hell of it is that Bert might get home alright, but then it might be too late and then he would regret having gone back. He is still up in the air and so are the papers on his rotation. 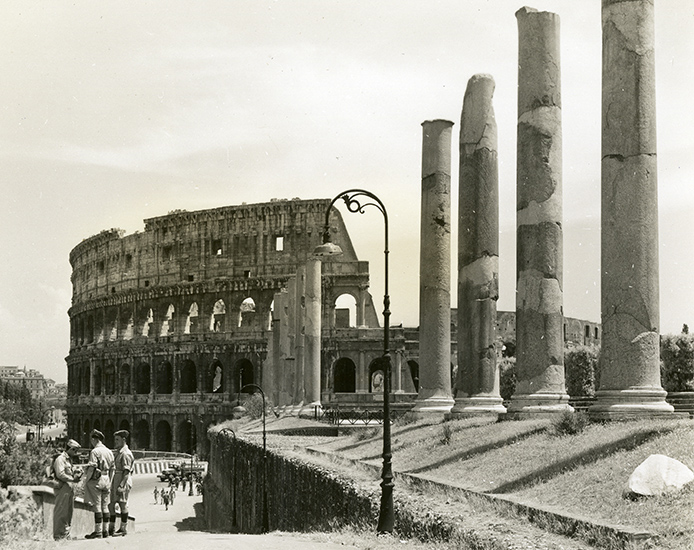 René got a ride up to Rome and while there, he visited the Coliseum. 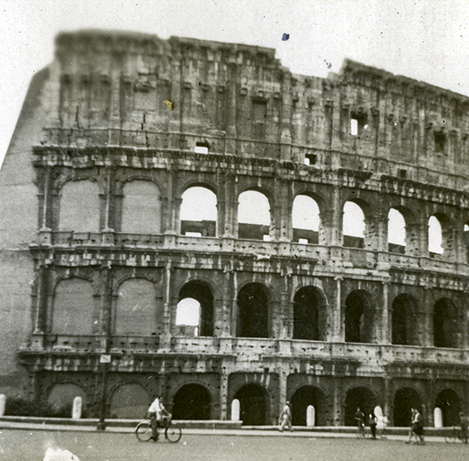 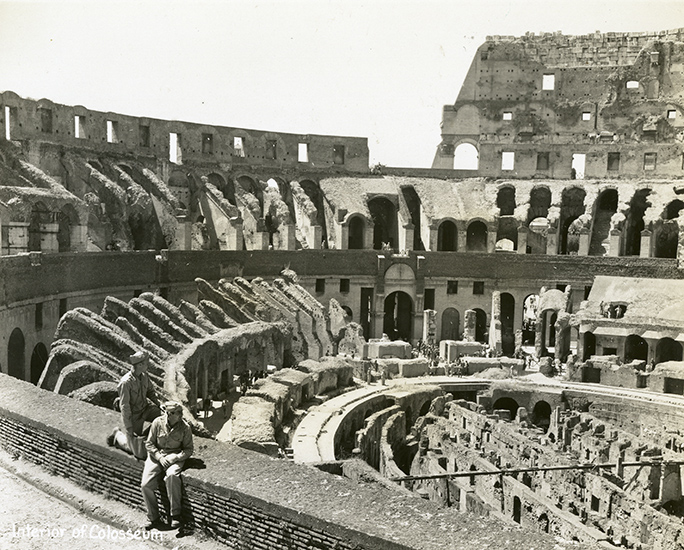 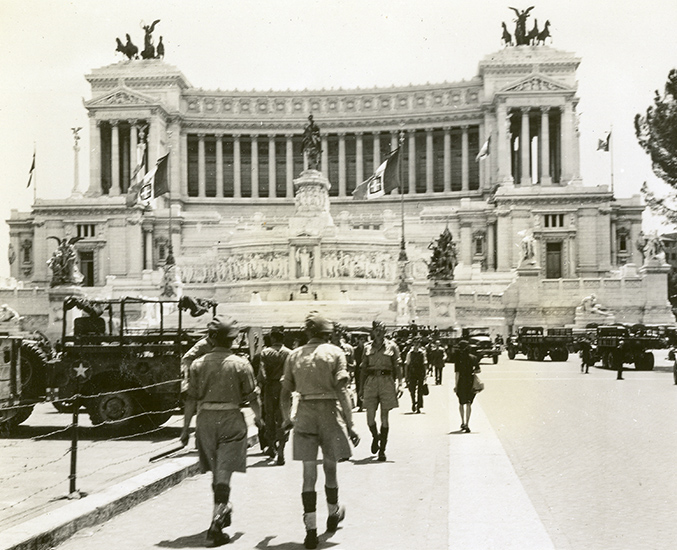 He also saw the palace of King Victor Emmanuel. 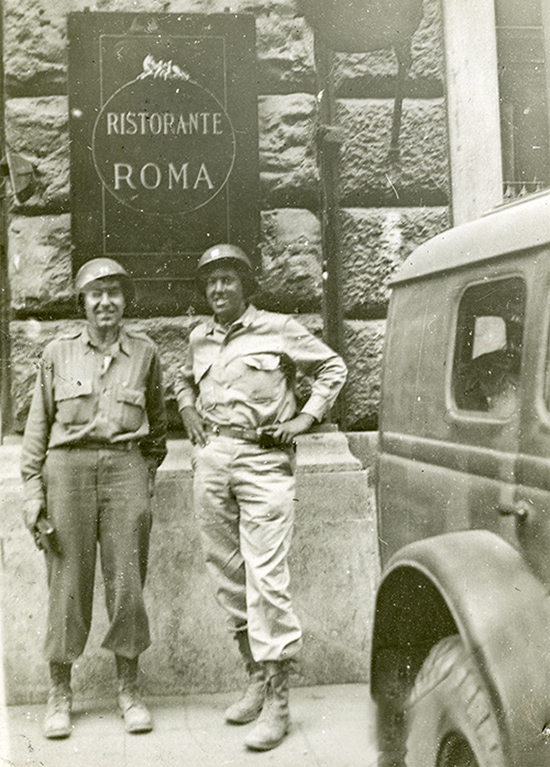 René (pictured above on the right) had “a good meal in one of the best restaurants in town.” 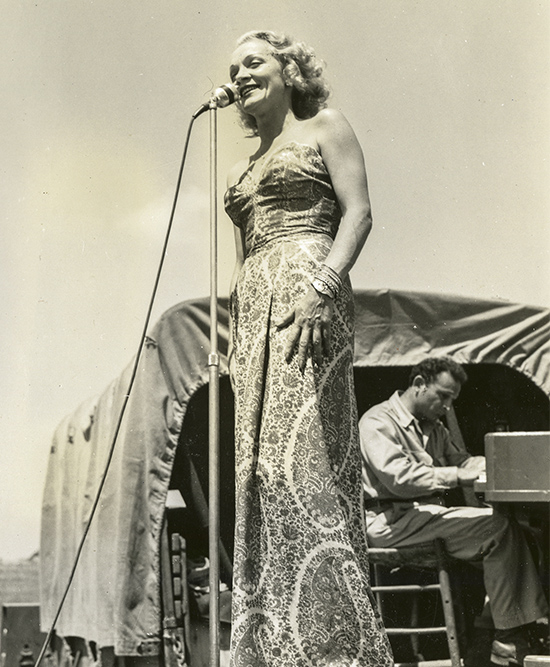 Back in Anzio, René saw Marlene Dietrich in a U.S.O. show. (above)

And, not to be outdone, the 59ths own Sargeant Sateja did his Carmen Miranda act (below) 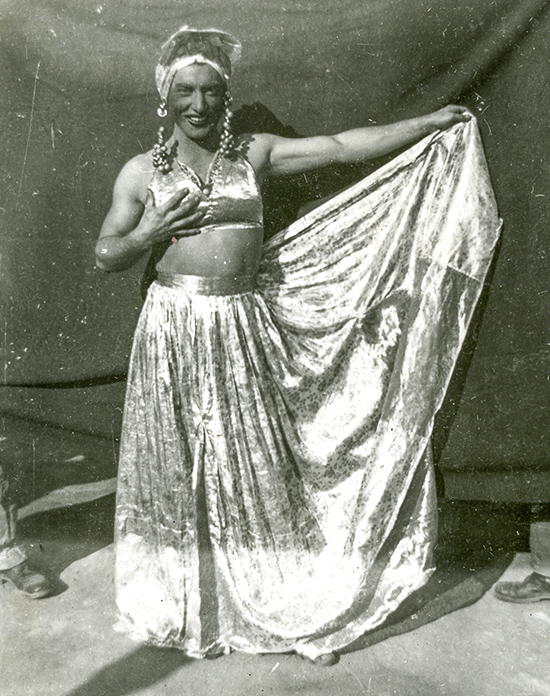