I was surgical O.D. the other night, and what a night that turned out to be.  I didn’t get to bed until 2 P.M. the next afternoon.  First we had a guy who ran his hand thru a buzz saw, and tho’ he didn’t do a tremendous amount of damage, he had so many wounds, jagged ones, including a fracture-dislocation of one finger and a compound fracture of another finger, with loss of one tendon, etc. etc. that it took a dickens of a time to sew him up.

After that, got an officer with a dislocation of the elbow, and then I finally had to wake Lou up at 2 A.M. because a guy with a gunshot wound of his thigh came in with a fractured femur, severed femoral artery and vein and apparently a severed sciatic nerve.  Just about that time it started to pour bucket-fulls.  The surgery tent leaked something fierce and we were emptying buckets left and right.  Finally when we did operate, we were standing in a stream of water that was running in one edge of the tent and out the other edge.  What a night!  Luckily Lou didn’t have too much trouble tying off the vessels, but undoubtedly the poor guy will lose his leg around the knee. One of those numerous accidental shootings. There have been far too many of them.

After the femur case, we proceeded to get a fellow who had been rather extensively burned — face, both forearms, chest, buttocks and both thighs.  Lou, Ed Blasdel and I all worked on him at the same time.  By the time we got done with him he looked as if he were an Egyptian mummy.  Anyway that finished the early morning off, and then I had to take Receiving.  Lou and Ed slept and then Lou relieved me after lunch. 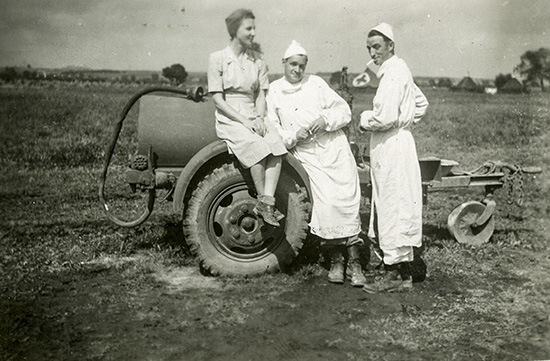 René was surgical O.D. (officer on duty) the other night – perhaps with one or more of these members of the surgical staff. (Left to right) “Tommy,” Karl Drier and Bob Folkins.