On the night of the July 8th and all during the day and night of the 9th, the weather was fierce — the water was rough and there was a 40- to 60-mile-an-hour gale blowing the whole time. I decided to spend most of my time on my bunk, as the outside was rather crowded, and though it was rather hot indoors, the recumbent position was far less conducive to getting rid of one’s meals. Ate O.K., however, and never really was nauseated, but just didn’t feel right. Stayed on the bed and read all day.

We sailed quite a ways out of our way, going clear to Malta, apparently to confuse the enemy. On the night of the 9th we had constant “general quarters.” Then, in the early morning, just what time I never noted, things began popping. We were some ways off shore and bombs started falling around us and there was plenty of firing from the shore batteries. But the cruiser and destroyers with us did all the returning of the firing, and some of the other ships did also, but we didn’t fire a shot, not having the opportunity.

Apparently at some point, one or two of our own planes were shot down, but just how true that story was — they were supposed to have been shot down by our own fire — no one has ever found out. Anyway, just before dawn, our #1 Piper took off, and as we were not heading absolutely directly into the wind, he had a little trouble and went out over the side some 20 yards before he came to the end of the runway. However, he stayed up and circled around successfully. He was at first shot at by one of our ships who mistook him for the enemy, but he wasn’t hit. Then, immediately afterwards, the second plane took off, this time most successfully.

Following that, we headed into the beach and set loose the pontoons. We were the first large ship into the shore and the first to have their pontoons launched. The weather had, suddenly around midnight, changed favorably – and there wasn’t much wind and the sea was relatively calm, so the small boats had no trouble getting in. Apparently there were no mines on the beaches at all and the only trouble came from shore batteries and snipers. We found that there had been four deaths caused by snipers.

The cruiser and destroyer were pounding shells into the town. Every once in a while we would see shells coming out from the town and then pretty quick a burst from the cruiser (Brooklyn), and then no more bursts from that particular part of the city.

It took quite a little while to unload the ship as one of the half-tracks got stuck and couldn’t get traction on the pontoon for some reason or other. But soon everything went rather smoothly.

Our donkeys had quite a time getting off, as they tended to fall in the spaces between the various sections of the pontoons. They went off the sides into the water on several occasions, but that didn’t seem to phase them and they kept on swimming into shore. The end of the pontoons were in a couple of feet of water, so all the jeeps, etc. that went off got a nice soaking, and so did the men.

Over on our left we saw a tank and a caterpillar that were sunk — apparently they had come off an LCT while it was still too far out in the water. Just the tops of the vehicles were seen. The men coming off the LCTs were having trouble getting ashore, and two almost drowned as we watched, for the ship could not get in quite close enough and had to let the men off in six feet of water — with packs and all that was pretty difficult. So they started unloading onto the causeways after a while, and it was certainly a heck of a lot easier and less dangerous for the men.

After we had unloaded the equipment and donkeys and water, we pulled out and let one of the other ships take the causeway. After we had pulled out a little ways, Mr. Mockbee and I were standing on the bridge and we saw a plane come down over the mountain. We both thought it was a P40 at first, and then just as we both recognized the black cross and let out a yell of enemy plane, that plane let go with three bombs right where we had been but a few minutes before — missing an LCT and LCI that were close together. There were several other planes around also, but they vamoosed over the hill when the destroyer let go with all her guns.

While we were still hitched up to the causeway, Capt Ruud and I had gone to the edge of the causeway, but as there was no reason to go ashore, we decided not to get soaking wet. But just then a wave came up and over the causeway and we found we had spoken too soon — for we were both drenched.

Mr. White, who had been aboard for several days, an A.P. photographer from Washington D.C., had gone ashore when we first landed and got plenty of good pictures and then returned to the ship before we pulled out. He took several pictures on the ship, getting one of all the officers and some of the men. He also got pictures of our donkeys and of our planes. He was quite an interesting and darn nice fellow, and we only hoped that he would get back to Algiers in time to get his pictures to Washington before any other photographer made it.

After pulling out from the beach, we launched our other two planes and they took off beautifully and with no trouble. We sat around out in the water for a few hours, and then finally a convoy was formed and we started back to Bizerte. 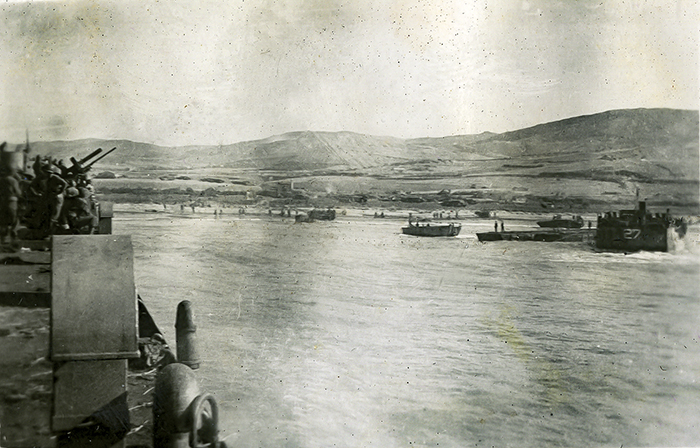 View from René’s ship as it approached the shore. 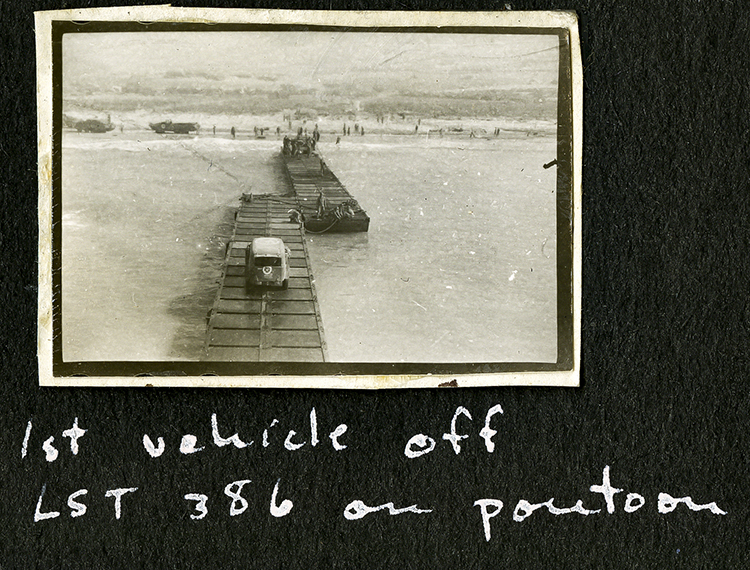 René described how the pontoons were deployed: “These pontoons were carried over lashed to the sides of the ship – then were dropped overboard some time before reaching the beach – ‘sea-bees’ manned them. The ship went full steam ahead, hitting the sand of the beach and the pontoons keep going to land. They are anchored to shore and then pulled into position so one end is at the mouth of the LST.” 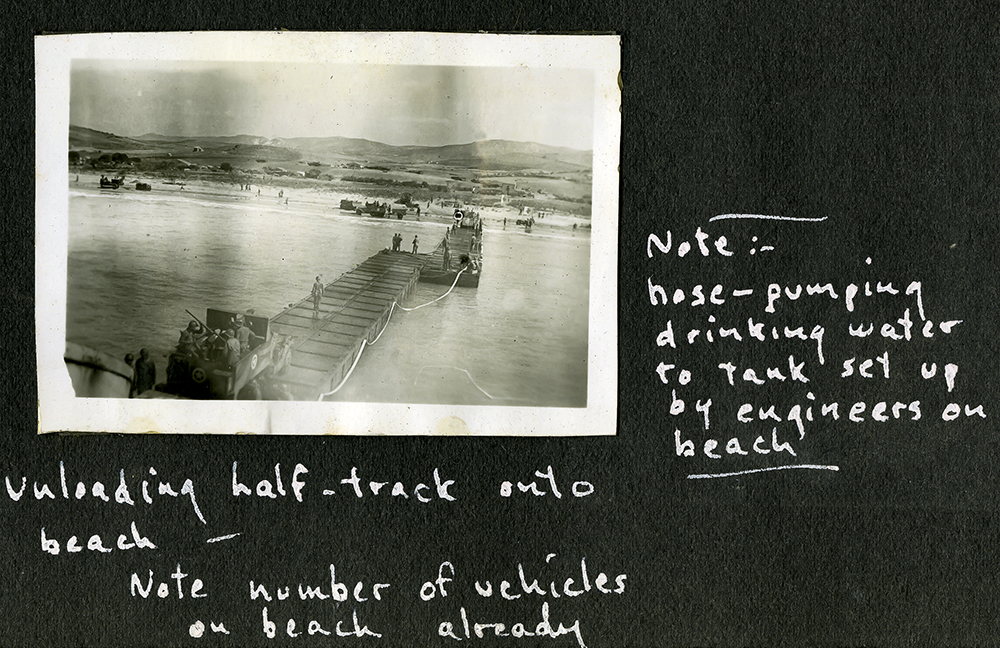 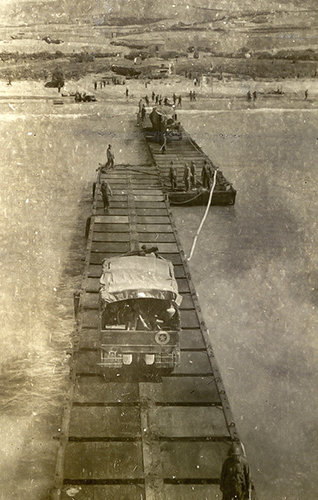 On July 10, Dr. Philip Westdahl, still in Casablanca, wrote in his journal, “SICILY INVADED! We hope it’s the beginning and most of all that we will finally be in it. A letter from the gang up north would indicate that they may be part of a hospital ship in the original invasion. Who knows, maybe they are at work this very day.”