Palermo, Sicily
Conclusion of No. 1

You’ll be interested to know that we have had weekly medical conferences here, the job of presenting the conferences being alternated between hospitals. Our last one was a really good one, given by Mattie, Bret, Wally and Frank. Heard one at another place last week, and decided I better look up our diphtheria figures, as they do not agree with theirs. Incidentally, we have had two cases of cutaneous diphtheria, which have been very interesting. Russ Klein and George Armanini are writing them up. I have one diptheria myocarditis, which, if I can induce the Sicilians to let me get an EKG, may also be of writable interest.

Jack Dunlap, who was our Lab Tech Sgt. in Africa, has been one of my roommates here. He’s an Evac. Officer and now has a new job, which is that of liaison officer between the unit and the Italian unit we have attached to us – i.e. they were originally prisoners working here under guard, but now they are an Italian service unit. They have three of their own officers staying with us, but, unfortunately, none of the officers speak English and Jack doesn’t speak Italian, so it all still has to be done via interpreters.

I had a little side-trip the other evening — went with Roy Hangar and Al Querhammer. Roy is the Sgt. who went around with me most of the time in my Supply days in Africa and Al is the night man on in Surgery – a former Chicago funeral director, embalmer, etc. Anyway, we set out of here in the old jeep, which has recently had a coat of paint, and went to the town of Tripani where, among other things, we visited the little town of Erice — the “City in the Clouds” as described by Bob Ripley in one of his “Believe it or Not” cartoons. We were there just before the moon came up. It was plenty dark and we couldn’t find a thing, but finally we found a door part-way open and a little light coming out of the crack. So Hangar opens the door further and sees a bar with some men (Sicilians) around it so he asked “Does anyone talk English here?” expecting that someone would make a feeble attempt. He gets the answer, “What do you want?” in perfect English and was rather astounded. It turned out that one of the men was the postmaster of the little town (a 1300 B.C. town) and he was formerly of Detroit Michigan and intended going back there after the war. Yes, funny things do happen.

Yes, Mom, I have picked up some Italian here and there and do fairly well with it at times. I know how the shortage is at home, but deviled ham is always welcome, Mom. However, don’t for a minute think that we don’t get enough to eat. It is little things like that, however, that do make a difference from time to time. Right now, with our Club, we are living in luxury for we have a couple of little electric plates right in the Bar and though eggs are expensive (15 cents apiece) we manage to get a goodly supply, and at night we have been having fried eggs with or without toast. Have also been having toasted cheese sandwiches, which we make on our own toaster – Bret Smart’s invention – taking two small electric heaters and turning one upside down and bolting it about 2-inches above the other one – so both sides of the bread get toasted at the same time. ‘Tis really neat, and, as I have said before, we are considered to have the best Officers’ Club Bar and Snack Room in the whole area. 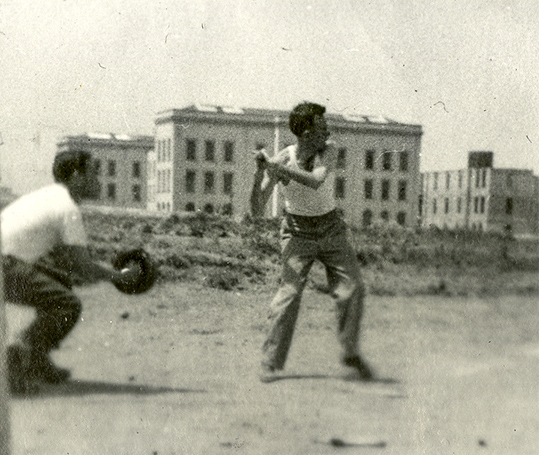 Russell Klein recently wrote up two cases of cutaneous diptheria, but still had time to take his turn at bat in the baseball game. 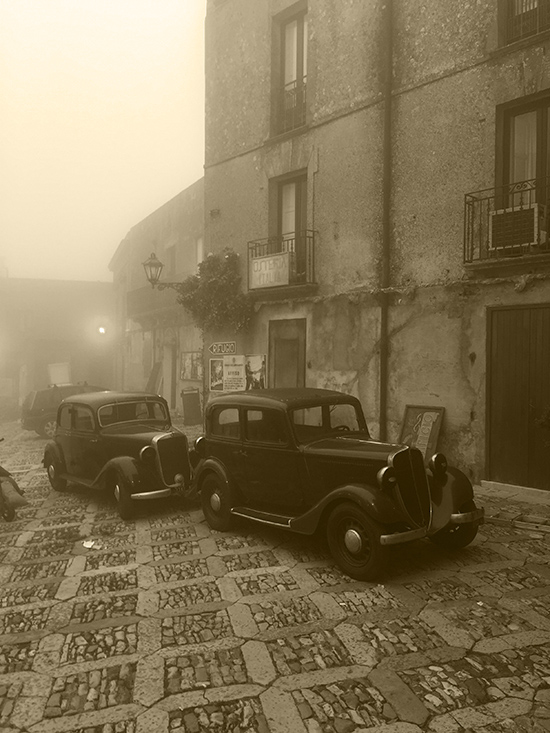 One evening Roy Hangar, Al Querhammer and René took a jeep to go visit the “little town of Erice — the ‘City in the Clouds.'” 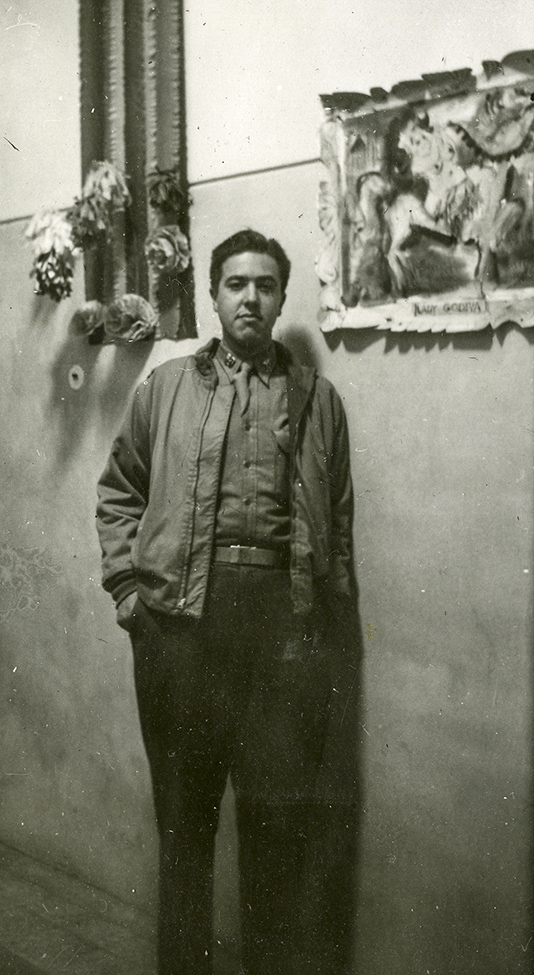 René at the Officers’ Club.