The 59th continues to be “wacky” in the eyes of the newcomers.  A couple of days ago a strange sight could be seen outside our officers and nurses quarters.  There we were, some 25 of us (officers and nurses), almost shivering in the cold, outside, eating ice-cream!! Nuts, you say — yes you’re right.  But, boy, it was yummy!!  As usual, the idea had been Edna’s.  She got a bucket, took some of the fresh snow that was in front of our place, mixed cream and sugar with the snow in the bucket, kept mixing it up, added some strawberry jam saved over from lunch, and in just about 10 minutes we had a whole bucket full of delicious “snow-cream.”  A can of Hershey’s chocolate syrup suddenly made its appearance and the deliciousness was increased.  Yes, and there we were, all of us, cold both outwardly and inwardly and yet standing outside eating the ice-cream for all we were worth.

You know, I told you about the sled that Bret had built.  Well, we had a real time with it two days ago!  About 18 of us went out with the sled being pulled behind one of our 2-1/2 ton trucks — only five or six fit on the sled — to an infrequently used road about two miles from here.  We took with us the makings for plenty of noodle-chicken soup besides some fruit cake (with candy for the kiddies in the area).  We all rode part way on the sled while it was being towed and then the truck left us at the top of a hill and we went lickety-split down the hill on the sled.  Actually the hill is about like the 27th Ave. hill between El Camino and Sea Cliff.

We took turns all afternoon hauling the sled up the hill and riding down the hill on it until we were all pretty well pooped.  The kids all appeared from the neighborhood with their small sleds and soon we were having them ride on our sled and we were using theirs.  Despite the congestion, we had no crack-ups of any consequence.  The kids, however, had a few minor accidents, once running our sled into a wall at top speed, but all sliding off the other side into soft snow when the sled hit.  They drive the sleds just like their fathers drive trucks and autos — no wonder they grow up to be such rotten drivers!

Along with us, on their skis, were Bette Holmes and Serge. The hill wasn’t too good for skiers, but they had a good time nevertheless. One of the funniest sights was when Ann Bryner put on Serge’s skis and Bette was riding one of the kids’ sleds down the hill. They collided in some soft snow alongside the road and both went down amid a cloud of lose snow.

Then, by the time we had sledded a good deal, the soup was boiling and you can’t imagine how good that tasted to us.  It was wonderful!  We’d all had a hand in the cooking — some cooking while others sledded.  We used a few packages of noodle soup, some chicken-noodle-soup and three or four packages of bouillon cubes.  We cooked it all in a big can over an open fire.

Our last ride down the hill was a funny one, too. Ann Dunn was steering and I was behind her with Ham and a couple of others. Just as we got to the bottom where the rest were awaiting us, as our truck had arrived, we suddenly got buckets of snow in our faces and could no more see where we were going than fly. Newsom and the others had really piled the snow on us just as we hit the bottom and we were drenched!  Then, on the way back, just on our little hill by our quarters, when the truck was towing the sled, we let go of the rope in the truck while we were on the incline and the people on the sled had a mighty startled expression when they found themselves sliding backwards instead of forwards. By the time Bret had the brakes on, they had slid several feet back amidst startled cries from the one steering. Yes, we know we are getting nuttier and nuttier! 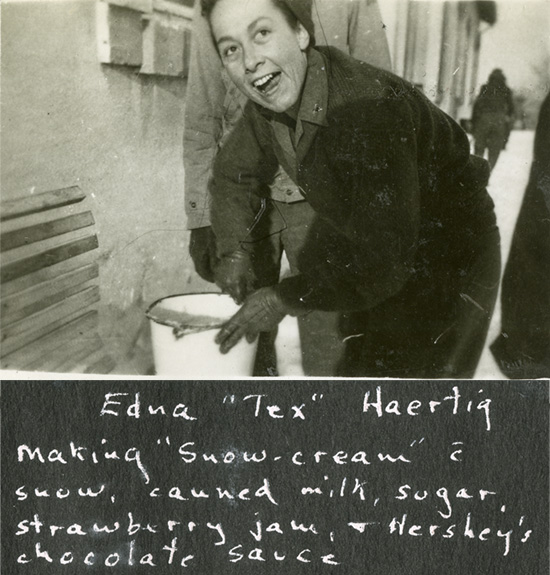 One day Edna Haertig (above) made “snow cream” and 25 members of the 59th (officers and nurses) shivered in the cold, outside eating it! 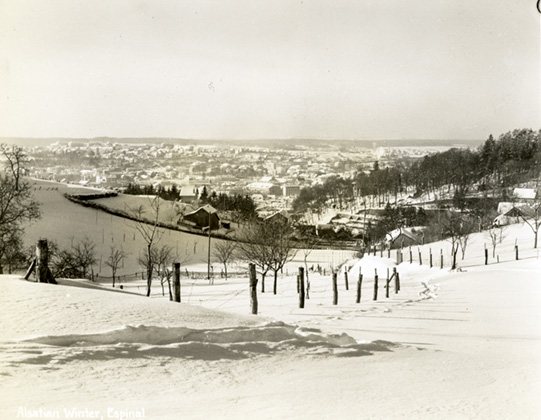 Another day they went sledding (on a sled Bret Smart made) and skiing. René said the hill they went down was “about like the 27th Avenue hill between El Camino and Sea Cliff.” 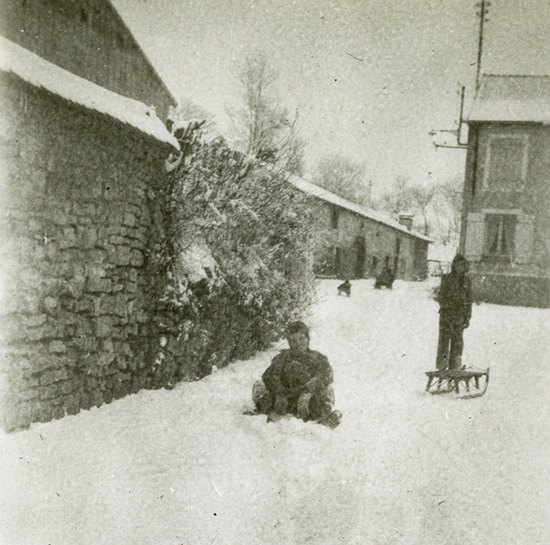 Bette Holmes took a spill on her skis. 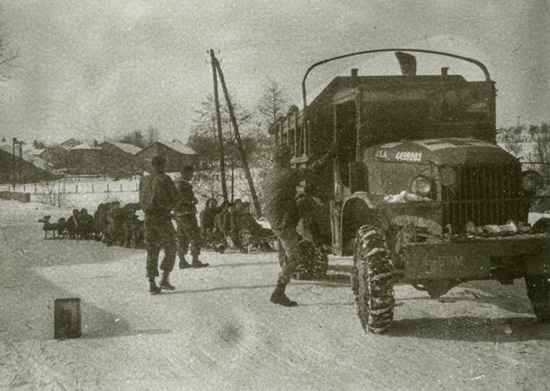 After the “kids” of the 59th had enjoyed sledding on the hill above their camp, kids from the neighborhood appeared with their small sleds and soon, René says, “we were having them ride on our sled and we were using theirs.” The photos above and below show the sleds being hitched to the 2-1/2 ton truck that pulled them up the hill. 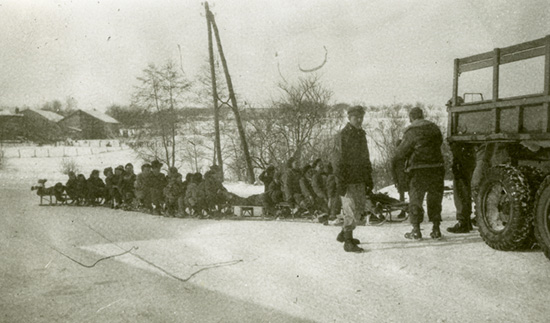