Change in assignments slightly at the moment – Eddie Welles has come off the surgical team and gone on anesthesia and Paul has taken his place. After Eddie has had a little while in that job, then Newsom or Pete will come off their team and I will go on one.

Have gotten a few new nurses – not fresh-from-the-U.S. kind, but a couple who had been in a station hospital for quite a while and another who has some exciting and almost unbelievable stories to tell about things that happened a couple of weeks ago. The latter’s husband is a Lt. Col. in a higher headquarters not far from us, and that was the reason for her transfer. She came with the story that Army Hdq. told her that she could be put in any of the outfits here and she would stand a chance of being as close to her husband in one as she would be in any of them. However, she was told by them also that if she wanted to be in a real good outfit – the best in this particular Army – she would go to the 59th. It all sounds as if she made that up to get in the good graces here ‘cause we do not believe it, but we like it, of course.

It’s interesting, and several of us were talking about it yesterday, how the attitude of the men of the outfit has changed in the two years that we have been overseas.  In Africa and the early part of Sicily, there were many who wanted to get out and get in anything, infantry, etc.  They wanted to get out of the Medical Corps — it was too tame.  Then, after the boys who went with Shuster into the Rangers had their tough time, the ardor of most of the men for the front-line infantry stuff was definitely dampened.  Now they are even less anxious to be transferred out.  Too, originally the pride in our outfit was almost nil. But, after the boys saw other outfits and particularly of late when new gangs have arrived — well, it isn’t safe for anyone to speak ill of the 59th, i.e. anyone outside of our own people.  There have been a few hospital cases, of late, as a result of such things, something that wouldn’t have happened a little over a year ago.

Excellent movie last nite. If you haven’t already seen it, it is a “must”! Greer Garson in “Mrs. Parkington.” Really good.

I heard of an odd and horrible accident recently wherein a jeep was going along slowly on the icy roads, turned a corner to see a French tank coming the opposite way and using up most of the road.  The jeep pulled as far to the side of the road as it could and came to almost a halt.  But apparently the tank did not see the jeep at all and kept rolling right over it before the occupants could do anything about it (the jeep being enclosed).  The left tread of the tank rolled over the right side of the jeep and thus was raised just enough so that the driver of the jeep sustained only a couple of scratches, as he was between the treads of the tank.  But the passenger was crushed pretty quickly before the tank realized its error.  It’s bad enough to skid on icy roads, but to have something like that come relentlessly on towards one, particularly if it isn’t an enemy tank, must be horrible. 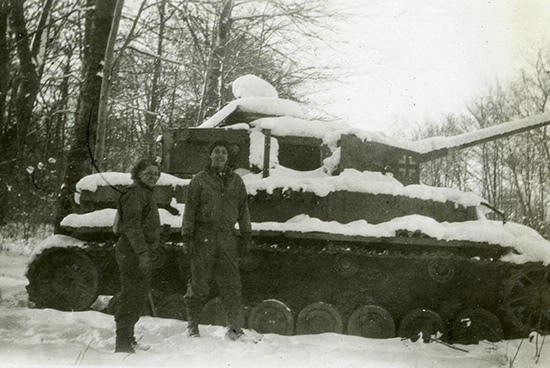 René poses above with Josephine Burnett (maybe one of the new nurses) in front of a German tank. He tells his parents a story about an “odd and horrible accident” involving a French tank and an American jeep. 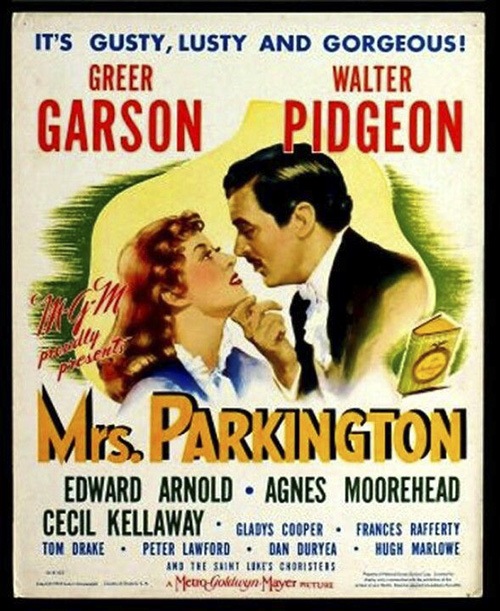 René says that the movie, “Mrs. Parkington” is a must-see.