Have been kept busy working these last few days tho’ I cannot say that I’ve actually been hard at work. Worked nights for two nights and now am on days again. Worked straight thru both nights, but the way they work here they sort of take things easy in surgery, no rush to get done and clear them up, so the next shift has it easy, as we do.

I have to prep all the patients right up in surgery and that takes a good deal of time, and consequently gives the surgeons relaxation or loafing time in between cases. It seems darned inefficient to us, and everyone is anxious for the 59th to open up again for business, so that we can go back to work in them manner we have become accustomed to.

Even on the medical wards things are radically different. They seem to try to get along on the wards with a minimum of equipment, even tho’ they have plenty of equipment in their Supply. Kuzell and Bryner were given their own floor together, and they have our nurses and our men, and so they get along fine now – once they put up a squawk and got the extra equipment they wanted. For example, for a whole ward they had only one wash basin, just a few cups, etc. But now that situation is remedied and things are running smoothly. As I’ve said, the ward care we give our patients [at the 59th] is better than that which is given here.

Another odd thing that they do is that they just admit a patient at any time of the day or night without having any orders written for the patient until the ward officer happens to get around to the ward to see him. Our receiving officer after 5 P.M. writes orders on all patients that are admitted direct to any ward, and as a consequence, the patient has medication started on him that night instead of the next A.M.

Just what the score is on our staying shut we know not. Probably lack of adequate space up where we could do the most good. We do need quite a bit of room. Seems to me, tho’ that it would be better for us to function even as two separate units if nothing else, rather than have us split and shipped all over the country as we are. But then, we do not rule!

Carroll and Ralph continue working days as their own team, while Eddie and I continue on teams of this gang. All are congenial fellows and nice to work with. It has been interesting meeting others and seeing how they work – sort of go back and appreciate our gang more and more whenever we stray and see how other operate.

Took time out for lunch. The meals here are something ferocious. They have some French gals serving the meals and they are served nicely alright, but ‘twould be better to have the food better prepared and have self-service perhaps. Maybe we’re just spoiled now, but even their own people say the food is terrible, but don’t know what they can do about it. Evidently the chef at the 59th still puts out the good stuff, despite the lack of fancy rations at times. Looks as if we’re really going to have to hang on to that guy till we hit S.F. again and then maybe install him at San Francisco Hospital or in our own restaurant. Back to our room after lunch today and I finished off the Blum’s fruit cake – something of that sort was definitely needed after the lunch we had.

Ralph Cressman (above) is working on a surgical team with Carroll Russell. 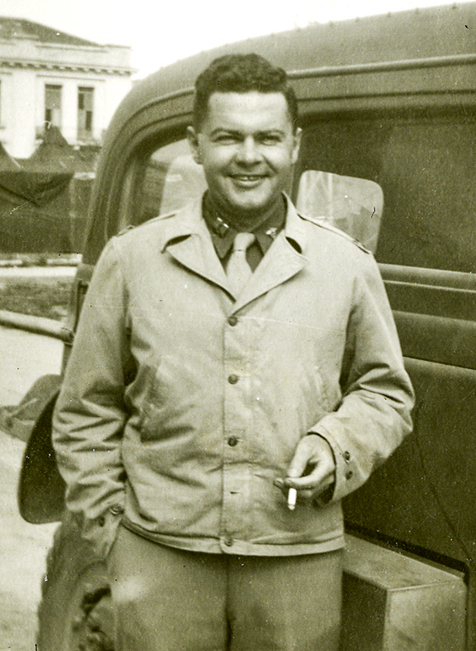 Bill Kuzell (above) is working with Serge Bryner running some of the medical wards.