You should have seen me the other night. Not having slept well, and having been up rather late for several nights in a row, I decided that I would take some sodium amytal and go to bed early and get a good sleep, a restful one. So, I took 3 grs. of sodium amytal at about 8:45 P.M. Then, just before getting to bed I remember that I wanted to tell Kay Magee something, so I hike over to her office, and while there I find that there have been reports of 3 more positive Diptheria cultures on wards other than mine, so that those three cases had to be transferred to my ward that night.

So I decide I better take a look at them to decide whether to give antitoxin or not – Bill Drew was medical O.D., but I figured I better do my own looking, so I call Liz on the phone and have her skin test the one case that I knew was the only one really sick, i.e. test him for sensitivity to antitoxin. And then I went up to the ward and after looking all three over I decided I wouldn’t give any of them the A-T that night. I finally went to bed at 10:15 P.M., a bit groggy from the sod-amytal.

Then, at 4 A.M. one of the boys comes over with a note from Liz, saying that one of my patients was having difficulty breathing and questioned whether she should give him antitoxin. Well, I was going to write to tell her to go ahead and give it, but then thought of the case at SF Hospital that I had had, where the kid stopped breathing just after getting the A-T and how susceptible the laryngeal dips are to such a thing, so decided to go over and have another look at him and to stay there while he got his antitoxin. So, while Liz gave it, I lay down on the desk — soon was fast asleep.

Kay Magee came around and put a blanket over me, and the next thing I knew it was 6:55 A.M. and the day shift was just coming to work. Liz said that she was just going to let me sleep there, right on into the day shift, if I hadn’t awakened by myself. She even put me on the “Night Report” that went into Miss Diffley: reporting the bed number as “table-top,” my complaints as being “not being served breakfast in bed,” etc. Rather surprised that Miss D. hasn’t said anything about it, but have heard that she got a big kick out of it.

We have been using Penicillin recently, and Carroll Russell gave a short paper on some of our results the other day when we had the Conference. So far, results in G.C.’s have been rather disappointing, however, since the potency differs in different lots and different manufacturers’ products. Perhaps with larger doses we may find it to be truly effective. Certainly, so far, there is nothing at all startling.

Regarding leave — I find that the three days with the men doesn’t count as “leave” at all, so I may take one sometime in the future. Right now I have no desire to. When you talk of responsibility in that set-up, however, well, there really was darn little. I knew the gang I took, knew them very well, and knew just what to expect all the way along. In fact, two of them are far better friends than any of the officers could ever be. 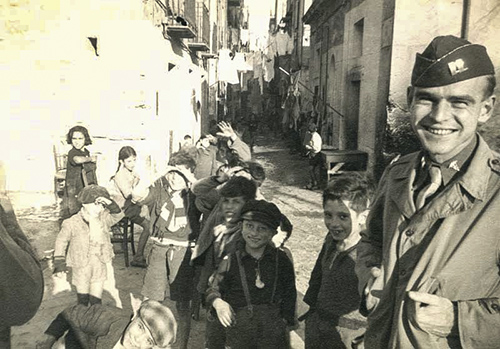