Eddie and I came over here two days ago to join the boys of the Illinois University gang, the 27th Evac., who needed some help.  They are a gang the same size as ours, but are carrying an extra load now and also have some of their men ill.  Ralph and Carroll are here functioning as a team with Chris Coletti, as their scrub nurse and Annie Dunn as their anesthetist. Ten of our nurses are likewise here with about twenty of our ward men.

Kuzell and Bryner are running some of their medical wards.  All six of us are living in a room together and tho’ a little crowded it is pretty good. We do miss those nice comfortable beds we had this last month tho’. Eddie and I are both assigned to different of their surgical teams; Eddie being on the orthopedic team, and I am on the general surgery team.

They run their teams differently than we do.  It’s too early to judge their efficiency, but it seems to me that they waste a lot of time in surgery between cases.  (Our cases are prep’d in Shock, while they do no prepping until the patient gets to surgery, and then the surgeon has to wait until that is done.) Another thing is that no one has introduced the typing method of writing up charts in surgery to them – i.e. until Welles and I hit the place. We wonder when they are going to catch on and get a typer assigned to their surgery, for at the moment, Eddie, Ralph, Carroll and I are using my trusty baby up there.

We have more equipment on the wards than they do on theirs, though their supply is certainly the same as ours.

Of course, there are a good number of things they do better than we do, but those things seem to be the things that relate to personal services, pleasures, etc. — seeming to think a bit more of their own people rather than the patients as our gang does.  Some of their patients don’t see an officer for a few days, whereas I doubt if there has ever been a day that any of our patients didn’t see an officer at least once (and very often twice) per day.  Nevertheless, this outfit does seem to be a pretty good outfit and they turn out a good deal of work, and good work too.

Most of our snow has disappeared in the last days and we are back to the rain and slush days.  Despite the fact that this gang is in buildings, too, they do not have the modern conveniences functioning as well as we have had them in the past — even in spots where they were none too good to start with.  I guess they just don’t have anyone like our Sgt. Kuhl the fix-all of the 59th.

Nelson Bell came up today and delivered some mail to us and also brought the news of a new Major in the outfit – George Armanini! He sure deserves it — he’s a damn good surgeon. Other promotions – Fadley to Captain at last. Edna Haertig and Chris Colletti got their 1st Lts. Celebrated Chris’s last nite with some of the fruit cake you sent from Blum’s which arrived two days ago. Tanks!

René and Eddie Welles (above) are on detached service as assistants on surgical teams to help the gang from Illinois University – the 27th Evac. Hospital. 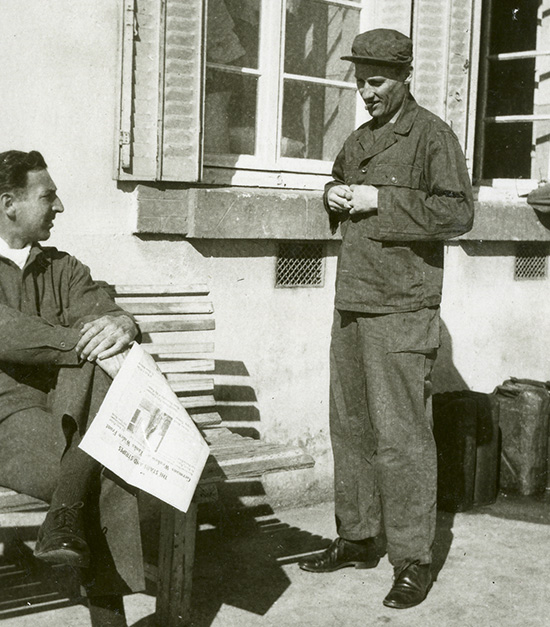 Carroll Russell (left) and Serge Bryner (right) were already at the 27th when René and Eddie arrived.