Took a hike a couple of days ago with Wally Greene, Hope Ecklund, and Dotty Merrell.  Must have walked almost ten miles, walking along one of the canals, which are strange and interesting features of this part of the country. The width of the canals is about the same as a narrow San Francisco city street, perhaps about the same width as our alley.  The water in most parts of the canal is shallow, but there are innumerable locks so that the height of the water varies depending on which locks are open at the time.

The barges that travel in these canals appear to be too big to fit in the various locks, but apparently they are made to fit almost without more than a few inches to spare.  The space between the two gates in any lock is only about 130 feet and the barges are just as long. In one small area there are about 10 locks, apparently more in this particular area than there are in most of the other areas that these barges travel to, according to the barge-captains we talked to.  The barges are able to carry some 300 tons (of coal, wheat, steel, etc.) and are hauled up and down the canals by means of tractors that run along the sides.  They think that after the war they may be able to install some sort of motor in the barge so that it will be able to go on its own power instead of having to be hauled.  At present they are able to travel some 40 miles per day, going all over the place. The men who run the barges live with their families right on the barge.

Got some new jackets a couple of days ago — the so-called “Battle-Jacket” or “Eisenhower Jacket,” you know, the one he copied from the British type of jacket that Montgomery, etc.  first came out with.  They are pretty nice jackets made of wool, and can be used as regular field-jackets or as dress-jackets, preferably the latter.  Yes, we are all suckers for something like that when it comes out new — even at the price of $15.  One guy buys something like that and then all the rest follow like a bunch of sheep and buy up everything in sight.  More equipment to carry!!

Also now getting issued our “overseas stripes” — I’ve got four of them so far, i.e. one for every six months completed overseas. Some of the sgts. with their sgt. stripes starting from top down and overseas-stripes from bottom-up, will have their arms nothing but a bunch of stripes.  More darn foolishness!!  Also got our stars for the campaign ribbons — some more hooey!  I now have three and am getting a fourth soon — i.e. one for Sicily, one for Italy (Rome area), one for Southern France — and the 4th supposedly coming for this area. Supposedly going to get a little arrow also for those of us who have been in on any D-day (only one, no matter how many D-days anyone has been in).  See why I’ve said that so many of these things mean so little.

Ann Dunn, who lost one brother at Pearl Harbor, recently received word that another brother is missing somewhere on this Western Front. He was up there where things were too damn hot a couple of months ago.  Think she has one brother left, who is in S.F. – her family lives there, I know. 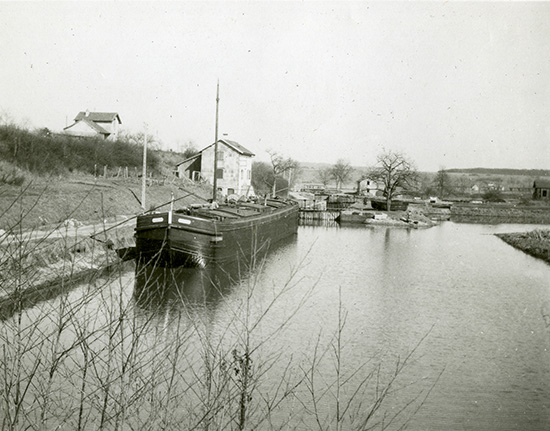 René tells his parents about a hike he took along one of the canals in the area, shown above. Also on the hike was Hope Ecklund, shown below admiring the canal. 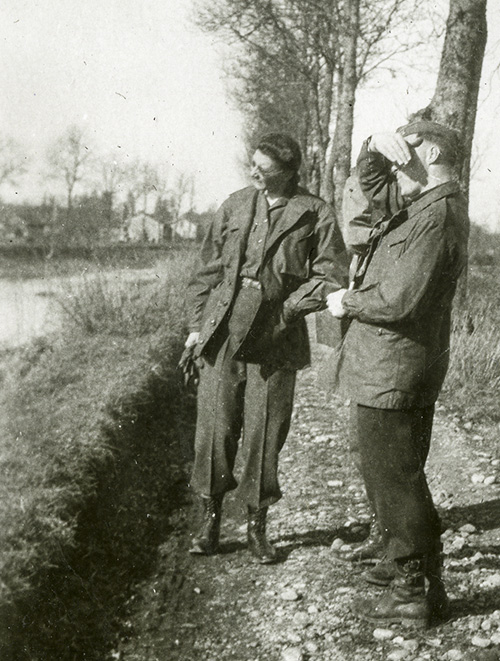