Here it is Saturday night, just one week till Xmas! I’m certainly hoping that at this time next year we will all be back home together anticipating a Xmas at 15-26th Ave. in the old style. Right now, despite the fact that we have been bad children and have opened our Christmas presents as they have arrived, we are looking forward to Christmas Day with considerable excitement. Perhaps we may have better meals that day, perhaps not, but even so, the day itself will mean something.

The Red Cross gals have managed to gather what will pass as Christmas trees and have spread them around the various buildings so that things are becoming very festive. One of the gals on my ward went out with her boyfriend today and whether they bought or just appropriated the tree that they brought back with them, I know not, but, to date, it is the largest tree that has shown up around here. Now the job will be to decorate it appropriately. As Lois is working nights now and is going to be working on Christmas eve and Christmas night, we probably will give the patients some fun on those nights. Miss Diffley told Lois that she could have the night of the party off and, as a matter of fact, Miss D. accepted my invitation to go with us to the party.

As I mentioned, we have started having German classes. The Chaplain (Daib) is from Brooklyn and is of German stock and as a consequence spoke German at home, so he is a pretty good teacher. In the class at first, Lois was the only one who did not know any German to start out with at all. However, now there are a couple more recruits and it is really quite a bit of fun. If we ever do reach Berlin, we should all be able to manage the language end of it O.K.

Chaplain Daib is certainly different from Clark. He has been through the Tunisian campaign with a combat outfit and is quite a guy. He really gets out and does things, organizes things, such as choir, the German class, etc. The funniest thing is that after Daib organized a choir, Chaplain Clark got jealous and decided he would have a choir also.

Jack Dunlap got out of the hospital yesterday after several weeks stay. Also, today the Col. was returned to his own room from the hospital section where, of course, he had a private room. Yes, he was operated on by Mattie. They thought he had an appendicitis, but actually what they found were two twisted appendices epiplocia. He is now doing well. 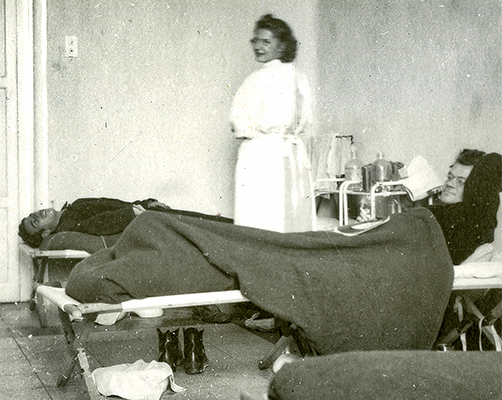 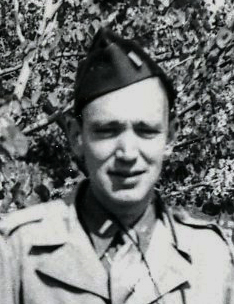 René tells his parents that “Jack Dunlap got out of the hospital after several weeks stay.”