No letter from René on August 7, 1944, so here’s an excerpt from the journal of Dr. Philip Westdahl. He writes about his brother, as well as what René and some of the other doctors are up to.

It was early in August when I learned that my brother Dick had been wounded in Normandy on June 13th. From all I could surmise it was not a severe wound, and I must confess I was grateful and relieved to feel that he had escaped so fortunately and was out of danger for the moment, at least. Knowing Dick and the generally admirable pride of infantry non-coms, however, I am sure he was anxious to rejoin his outfit and be back there pitching.

On August 7, Roy Cohn, Chuck Schwartz, Paul Stratte and Rene Bine left us on detached service as a surgical team to be attached to a hospital going in ahead of us on the coming invasion. They were fortunate enough to have their names picked out of a helmet from amongst a list of eager and enthusiastic volunteers. I was one of the less fortunate aspirants.

During the 38 days that the 59th Evac Hospital was set up in Italy (Anzio and Battipaglia), they performed 265 surgeries, for an average of 6.97 cases per day. On July 16, they performed 19 cases, the greatest number of surgeries in a 24-hour period while in Italy. 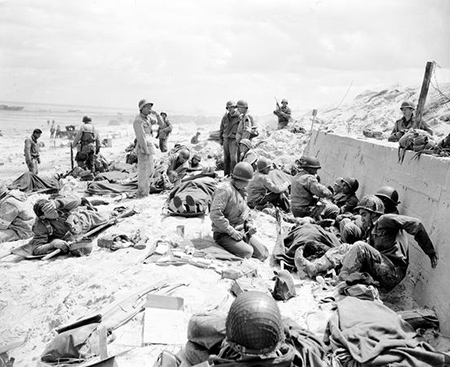 American soldiers lie on stretchers and sit propped against a sea wall awaiting transportation back to England for treatment after being wounded in the Normandy invasion, in northern France, June 1944. One of the thousands of American soldiers wounded in Normandy in June was Dick Westdahl, Philip’s older brother.