August 11, 1944
Somewehere on the Mediterranean Sea

Shortly after I wrote my last letter I was kept sort of busy assisting Jones and Fadley in Supply, and then even went to the city [Rome] with Bergie (Medical Supply Sgt.) on business for two days. We took a few of the other boys with us, but they spent their time wandering around seeing the sights, while Bergie, Sharp (the driver) and I worked. We traveled around quite a bit over some of the darnedest roads, trying to get some equipment to a few of our boys who were on detached service with another outfit.

Also visited the gang that used to be our next-door neighbors in Sicily. The officers seemed quite satisfied, but their men were rather discontented as they were taking care of nothing but German patients. It’s hard on the men and nurses who have to be around those patients when they are unable to converse with them – something that relieves the idle monotony of hours on the wards when there are American soldiers in them.

That night the men had rented a couple of rooms and rather than try to get rooms at the usually crowded officers’ hotel and be away from our vehicle, I stayed with the men and we really had a good time. We were served dinner right in our rooms and ‘twas pretty good. The other fellows with us are Clive Schmidt, Spudowski, George Heath and Bert Cross. That night we saw an excellent movie, “Lady, Let’s Dance!” I don’t know who was in it, but she was an excellent dancer and ice skater. That’s the type of picture it was – sort of an ice follies thing. When we lined up to go into the theater, we were very doubtful that we would get in, for the line was a block and a half long on our side and the same length of line made up by the British soldiers coming from the other direction. However, when the line started moving it just kept going and we soon found ourselves in a very spacious theater. It was the nicest theater we’d been in to date, and despite the mob there, empty spaces were still visible.

The next A.M., Bergie and I took off early and attended to business and then later in the day picked up the rest of the guys and headed home. When we got back, Ken greeted us with the information that I was leaving the next A.M. Had expected it for several days, but things had been so drawn out that when the info. came to leave at last it was sort of a surprise. However, we were all set in no time.

You see, a couple of weeks before we had (those of us who wanted to) drawn straws to see who would be part of a surgical team. There had to be one major and three captains, so Mattie told all the majors that if they didn’t really feel very anxious to go that they better not be in on the draw at all, for he felt that if Roy wasn’t able to go, he would never forgive anybody. The other lucky ones turned out to be Chuck Schwartz, Paul Stratte and myself.

After the names had gone in, the Old Man tried to get my name taken off and Pete Joseph substituted. For some reason or other he decided that I was his most indispensable medical officer. It was a compliment all right and I knew what he meant, for I’ve worked in more different sections of the hospital than anyone else and could, if necessary, run Supply without much difficulty. As it turned out the orders had already been cut at higher headquarters and it was impossible for him to change them. Now I’m glad that he wasn’t able change them.

The four of us, with our three enlisted men – Clint Green, Chuck Davis and Bill Kioski are looking forward to a good time. Plenty active, no doubt.

After sitting out in the dust for a very short, though too long, time, we moved to another dusty spot amid the grape vines. For some screwy reason, no provision had been made for rations for us for the next few meals. But leave it to us, Chuck and Paul went foraging and came back with a whole case of “K” rations, a can of coffee and 5 lbs. of sugar. As a result we didn’t starve, but I must say we were very happy to see the A.R.C. (American Red Cross) gals on the deck with their lemonade and donuts awaiting us. 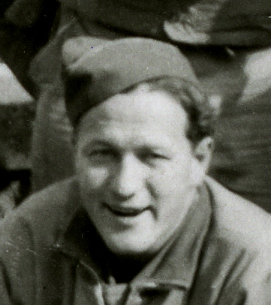 René tells his parents about a couple of adventures he had with Medical Supply Sgt. Bergstrom – known as “Bergie” 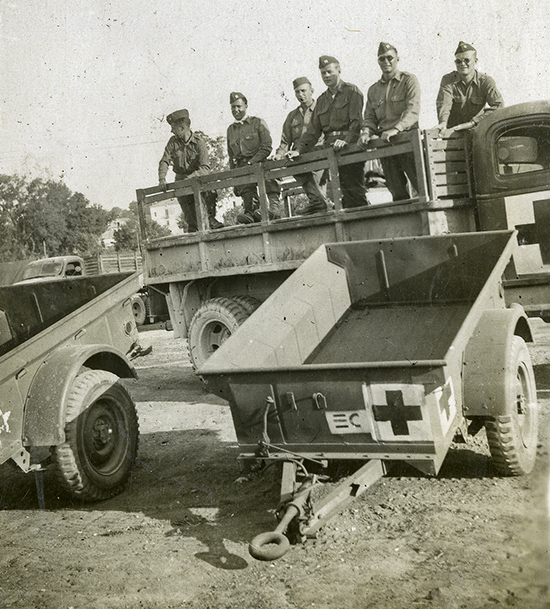