Now I have to tell you about another unpleasant subject – about the tragic manner of Raymond’s death. [Raymond Sternberg was the son of Paulette Leon Sternberg and Anthony Sternberg.] He had been in the Army but 6 months, and had just finished a patrol of the area he was in (near Strasbourg) at the time when there were quite a few Krauts around in civilian or even American uniforms. On these patrols, they naturally kept their firearms loaded.

On his return from patrol, there was some sort of a formation and they were told to “stack-arms.” When fire-arms are “stacked” they are hitched together in sort of the form of a tepee. For some reason, after they were “stacked,” Raymond wasn’t satisfied with the way his group was stacked and reached over the three or four rifles to straighten his rifle out a bit and in doing so, he apparently pulled the trigger – and he had forgotten to unload his rifle when he came in from patrol. From what they all said, he was a very calm person and difficult to excite, usually meticulous, and consequently that such an accident should happen to him was terrible.

Paulette, of course, had a difficult task when she met Anthony. She had written to him about Raymond, and had thus hoped that by the time he returned the shock would have been over with. However, none of those letters reached Anthony and tho’ some of his fellow officers had heard the sad news thru letters they received, none had mentioned it to Anthony, since he hadn’t gotten direct news of Raymond himself. He did not even know that Raymond was in the Army. When a couple of these officers arrived home, ahead of Anthony, they called on Paulette and explained that Anthony had not received any word about Raymond, so that she was at least partially prepared for having to tell him.

After leaving the Sternberg’s, we walked back to Lilice‘s where I was to have supper.  Lilice had phoned Yvette to have her there for supper also.  At about 7:30P.M. Yvette arrived.  She has reddish-brown hair, does not look too much like the picture I sent you 6 months ago – she has obviously changed some. She doesn’t look like either Claudine or Jean-Pierre, nor does she look like Lilice or George. She is husky and is rather short, coming an inch or maybe two above my shoulder.

Here again I do not know just how much, how many details Lilice told you, but were I to attempt to tell you all about Yvette, I doubt if I would ever get done. During my all too short time in Paris, three and a half days, I spent 8 hours with Yvette and wished it could have been ten times that amount. She’s a truly amazing person and I couldn’t help but feel that it was a great honor to be able to be with her for even a minute. 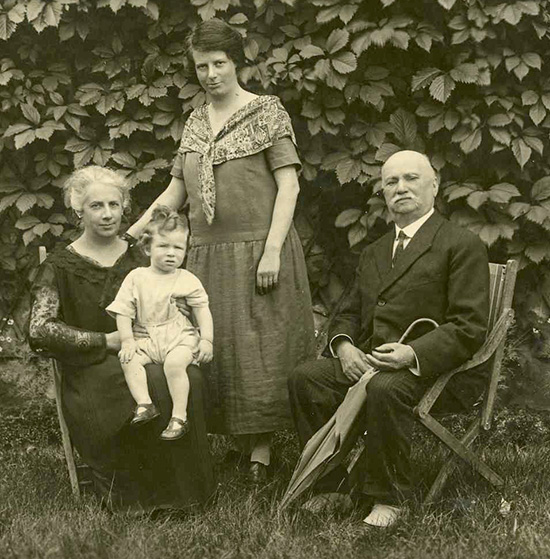 After telling his parents about the fate of Sadie Bine Leon who perished in Auschwitz in 1944,  René  has to tell them about the death of Sadie’s grandson, Raymond Sternberg. The photo above, taken in about 1925, shows Sadie holding baby Raymond on her lap. Standing is Paulette Leon Sternberg, Sadie’s daughter and Raymond’s mother. Also shown is Solomon Bine, Sadie’s father, who passed away well before the war.

René is finally able to see Yvette Baumann Bernard, his second cousin, who returned to Paris from Leitmeritz concentration camp in May, 1945. René tells his parents that Yvette is “rather short, coming an inch or maybe two above my shoulder,” as evidenced by the photo above of the two of them.