Last night, under “Cohn‘s whip,” we again turned out the work, doing practically as much work at our one table as was done in the whole neighboring operating room of three tables and three teams.  Actually, we were working so fast and the other team in our operating room was doing O.K. by themselves, so between the two teams we kept the three tables going.

We’ve done O.K. with all the best officers in this unit, and have been taken in as “one of them” far more so than have any of the other outside teams.  The Chiefs of the Services, and the Registrar particularly, come into our tent and sit down and talk at the drop of a hat.  Of course, the fact that Paul got ahold of a demijohn of very good French wine the second day here, and the darn thing doesn’t seem to have any bottom, may have had something to do with our popularity at the start, but truly they do seem to like us.  In fact, their Colonel asked Roy today whether he would like to “be lost” for a while — meaning that orders for us to return might be considered “too secret” to show us for several days, or maybe a week or so, after they are supposed to be executed.

As long as this gang stays ahead of the 59th, we would like to stick for a good while — maybe the novelty will wear off, but so far we’ve been enjoying ourselves.  One nice thing is we have very little ward work to do — only our serious cases, such as bellies and chests.  And even then there is an assigned ward officer to their wards, so only a few things have to be done by us on even those few cases.  Of course, we follow our other cases if they are here long enough — but the work of filling out a lot of records is almost nil for us.

Another good thing is that if there is only a relatively small amount of work, the surgical teams on call try to handle it all – of course, when the rush comes then all work. We worked all night last night – had a helluva time sleeping even 3 hours in the heat this morning. We went for an excursion this afternoon and unless a lot comes in, we won’t be called tonight. It works out pretty well.  Incidentally, we did 17 cases ourselves last night, including a long belly case.

This afternoon, Paul, Chuck, Henry Work and I went to a nearby town and were greatly pleased with the reactions there.  We went into a bar, talked to a bunch of young and old Frenchmen, and when the proprietor refused to allow us to pay for the one drink we had of Vermouth, the only way we finally were able to pay him something was by buying drinks for all the Frenchmen there — some 10 or 12 of them.  They have certainly all been glad to see the last of the Germans — in fact, in that particular town the Machi are active.  They’ve been out hunting Germans and don’t take prisoners ordinarily!

We heard there was a river nearby where we could go swimming, so we asked the men about it.  They told us where it was and then sort of as an after-thought told us not to go there, as there were a lot of Germans still in the hills nearby — but by 5P.M. it would be O.K.  We decided to listen to their advice, though we didn’t think their fears were warranted.  Paul and Chuck got haircuts and then we saw a group of the Armed Partisans coming into town.  We asked them about the swimming, and they said — yes, it was O.K. to go there now.

It was swell swimming in fresh water — the last time I did, I believe, was in our trek across Africa 14 months ago.  The pool in the river was small, however, and not very good for swimming, but it cooled us off swell.  It was most refreshing, and we had some interesting conversations with a group of young men who were there.  One was a former Russian officer who had been in a German labor battalion and who, on D-Day, had shot, by himself, the three German officers stationed in the town.

Yesterday, while we were standing around our tent, we suddenly saw three Germans come with hands up out from behind some brush that lies behind our row of tents. They were happy to be able to surrender to a hospital — were pitiful looking, without food for three days — unarmed, and glad the French didn’t get ahold of them.

Wouldn’t you know, a goofy photographer would be here at the time.  She (yes, a she) made it look very dramatic.  She took pictures of the Colonel  searching them (Stratte in the background talking to one prisoner in German, in shorts and nothing more — and not swimming shorts either).  She got some other stupid shots also, which you may eventually see in “Lady’s Home Journal.”  The photographer, Jackie Martin, earlier had tried to get the ship’s captain not to use the pontoon bridges when the nurses de-barked so she could get pictures of them wading chest-high in water!  The nurses love her for that, of course — like poison!  Needless to say, the captain of the ship was far more sensible than to oblige. 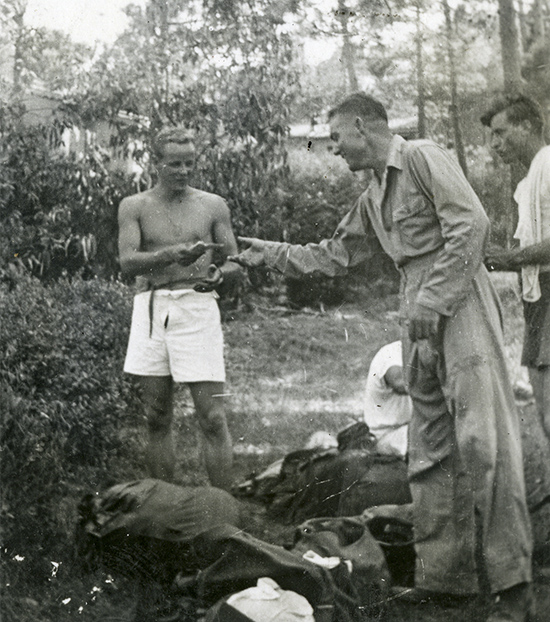 René tells his parents that three German soldiers surrendered to the unit he was stationed with and that a “goofy” photographer took photographs of the Colonel searching them — with Paul Stratte in the background, “in shorts and nothing more — and not swimming shorts either.” This isn’t a photograph of that scene, but one taken a week earlier — showing Paul in his shorts, with Tucker and Bob Simpson. 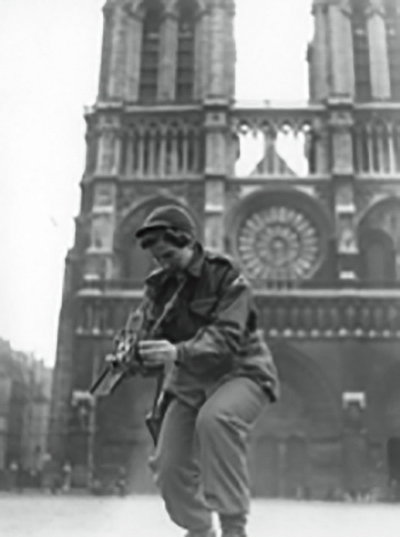 The photographer René mentions was Jackie Martin, who became the first female member of the White House News Photographers Association in 1942. During World War II she was the official photographer for America’s first female army, the WAAC – the Women’s Army Auxiliary Corps – evidently not the Ladies Home Journal, as René says. Jackie is shown above in front of Notre Dame Cathedral in Paris.