We continued very un-busy yesterday – Roy and Chuck went foraging in the nearby country-side, while Paul and I hitched a ride and went to a town some miles away to see if we could find George Davis and maybe bum a vehicle off of him. But we found he had not yet arrived, so after wandering around a little we got a ride back with our friend Bert Borem, a 2nd Lt. who runs the laundry outfit, which did some of our laundry (i.e. hospital laundry) in Sicily and is now doing it for this outfit.

When we got back from our jaunt, we relaxed again and soon found ourselves fast asleep – no we didn’t sleep through meals!

Last night the American Red Cross gals in this outfit dished out coca-colas, 2 apiece, but we managed to get 3 apiece. They had gotten them on the ship they came over on – a hospital ship. Boy, the cokes really tasted good!

We had an interesting experience last night — never a dull moment in this outfit.  We saw a Piper-Cub pilot circle high above the hospital just at dark — apparently unable to land at a field some distance from here because of other activity nearby — fireworks.  So Chuck Schwartz and I got the idea that the poor guy could land in the rather narrow, but 100-yard-long area between the officers’ and nurses’ area.  We got everybody out with flashlights to mark the borders of this “field,” pulled up some posts that were in the way, and guided the plane in.  He over-shot a bit and clipped a wire we had over-looked, put on his brakes, spun around, and stepped out un-scathed.  He had a crack in his propeller and a dent in the plane, but otherwise O.K., and very happy to be on the ground. Never a dull moment!! 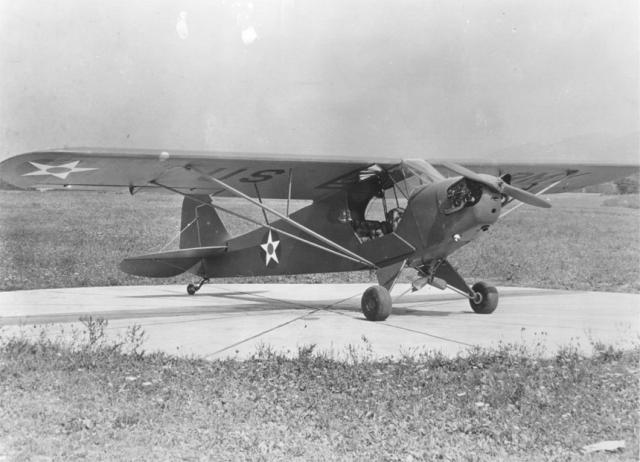 René tells his parents about “an interesting experience last night” – involving a Piper Cub — maybe like the one pictured above. 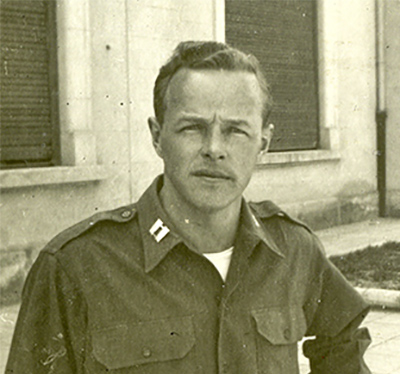 René and Paul Stratte (pictured above) hitch a ride to town to see if they could find George Davis (pictured below) and “maybe bum a vehicle off of him.” 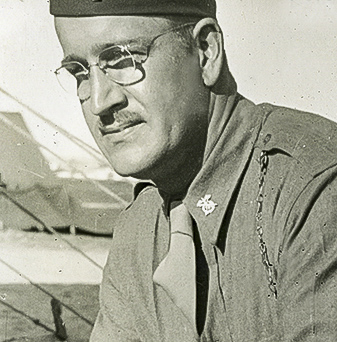