‘Tis Sunday and looks as if it is going to be a day of rest alright for us – which means that in a very short while we will probably start out for a hike around the country-side or perhaps find George Davis, who we understand is only a matter of a few miles from us.

We’ve done a lot of work in the last 48 hours – mostly on Germans, thank goodness, and actually we’ve done 1/8 of the total amount of surgery done in this hospital. And, note they started working 12 hours before they asked us to start. We’ve done 27 cases, have been working 33 out of the 48 hours. And, in that bunch, we’ve had 3 chest wounds, 3 bellys (one with lacerated liver, perforated duodenum, 7 perforations of small bowel and 3 larger perforations of transverse colon) 2 femurs and one amputation.

Roy really cracks the whip – has a case all ready for the table while Chuck is serving up the last one. The longest case we had was 2 hours – most are 15 to 30 minutes in the actual doing. It’s been lots of fun.

The 59th could do the work just as rapidly and more rapidly if they could ever forget their idea of drapes and everything to perfection – and if they had Roy driving them – but I doubt if they’ll do it with Mattie, as he isn’t the speed demon Roy is. Probably that is more the reason for the 59th being behind so far all this time – possibly more the reason than the Old Man. It’s sort of a vicious circle. In the time we’ve acted more as a station hospital, so maybe the higher-ups feel they should keep us back, as we’d never be able to handle the cases in a forward area. But maybe we shall soon see what they can do if they have to.

Last night Helen Nelson, who had transferred to this unit from ours, arrived with the rest of the gals of the unit. The Col. of this outfit is giving her a free hand, as apparently he has been dissatisfied with his mess officer and requested a dietician primarily to give variety in the Officers’ and Nurses’ mess. Helen is thrilled so far, and seems to like the gals of this outfit.

Helen came with news of more transfers from the 59th, including Chaplain Daib to an engineering outfit. After the Old Man and Daib locked horns a few times, the Old Man had turned against him and both got bitter against each other. So, they mutually agreed on only one thing – Daib’s leaving.

The four of us (Roy, Chuck, Paul and I) are in a pyramidical tent together. And with the paucity of baggage we brought with us, we have oodles of room – however we have to do frequent washing, as we brought so little stuff to change into while washing one set of clothing.

What a difference between Italy & France! This is civilization again!! People are spotless, towns and buildings are clean. The first nite we had beds of pine needles – and the whole atmosphere just cannot compare with Italy.

Have talked to a couple of young Frenchmen – both in the area and the patients we’ve gotten – civilian patriots, fighters, etc. They’ve had very very little food – everything rationed and though certain things are listed on the ration tickets, they were unavailable anyway. Apparently, the bigger places were cleared out by the Germans some time ago, so goodness knows where Jeanne or David might be found when their town is taken. Incidentally, my French has at least been understandable, I’ve found, though my vocabulary is limited.

Quite a storm the other night, but luckily we were under tents shortly before and our things (our few things) did not get wet. 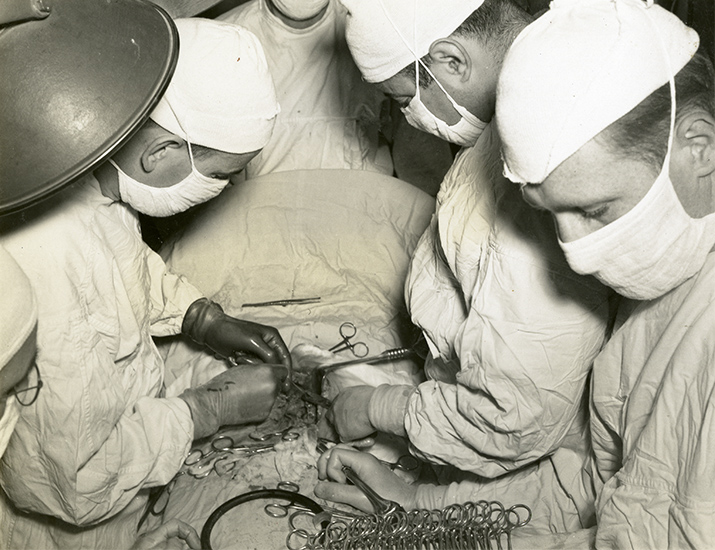 René tells his parents that they have done a lot of surgery in the last 48 hours — “mostly on Germans, thank goodness.”