Finally, after getting another load of stuff (the things that we had brought down in the first echelon), the trucks made another trip down here. By that time, in fact the evening before, most of the outside vehicles had arrived so that all headed down here. However, that first area got chewed up pretty much and we had to use a winch to get about 8 of the trucks out of the mud.

Unfortunately, our generators had been unloaded at that first area as the Old Man tho’t we ought to unload and use the trucks – thinking, too, that we were going to finally get some trailers for them. Soo, again the usual job of having to get a wrecker to load them back in the trucks. I scoured the countryside trying to get one and when, finally I was promised one for within the hour, I stayed to guide him up to the first area. Had lunch, therefore, with that Ordnance outfit and was glad I did…for they had steaks, and I had two of them at that. The gang there were old friends of ours, in fact some were still with the outfit who knew us when they were with us in the summer of ’42. They also had unloaded our generators at midnight the night we arrived in Sicily.

Finally the wrecker returned from where it had been and I took it up to our area only to find that one generator was already loaded. What had happened was that when I did not return after a couple of hours (having had to go a lot further than we had figured to get a wrecker), Jobe had set out looking for one himself and had succeeded in getting the generator on (a smaller one) he found.

All went well, with everything finally getting moved down to this area — except the generators.   We even had patients before the generators arrived.  In fact, surgery was waiting for the generators before starting on the first case.  The boys had done wonders in setting up.  Having started from scratch at 9 A.M. in the morning, they had patients at 4 P.M. and had everything that had arrived by that time up — i.e. all the tents up and ready to function.

That night I got a good sleep and was surprised to find the next A.M. that the “Gang-Greene” was scheduled for that day off. The Col. soon found out, and as Gil and Jack were not as yet down from the old area, he had me go out on a couple of special missions. Also went with the Col. to see if we could get Klemperer back with us – i.e. Klemp and his Neuro-surg team. While at Klemp’s headquarters, I had quite a talk with Leon Michels who was at his hdq. at the time, but was going out to one of the Field Hospitals the next day. He had just come back from an extensive tour of the country with his C.O., a Lt. Col. Sullivan. He had been thru Metz, Paris, Luxembourg, and the whole Aachen area. He really enjoyed it tremendously and said that of all the places, he liked Luxembourg the best.

Worked all day yesterday, but things are slow today. Guess that even by double-jumping, as we did, that one cannot keep up with things these days. It is beginning to look as if the end is nearer than I imagined a few weeks ago.

Our present area is situated nicely, in a valley, but unfortunately it is wet as the dickens.  It is pretty much marsh-land and the ground just never dries out.  In fact, when one digs a hole anywhere, it just fills up with water in no time.

Letters in the last few days of considerable interest. The letter from Jeanne yesterday was the happiest yet, however. They have heard indirectly from Yvette. Some other returning women had seen her at one of the camps and she is in fine health. Strangely enough, too, she had bumped into and was with her sister-in-law!! It probably won’t be more than a matter of days before she is back in Paris. Happy day!! 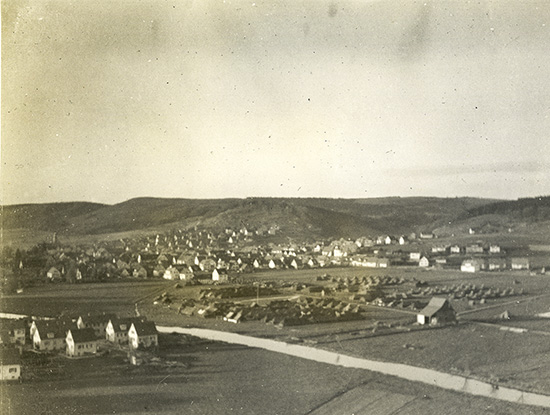 The tents of the 59th Evac. Hospital — with the town of Heidenheim in the background.