Finally we came down off the hill and went to the “Surgical Clinic” where we were shown around sort of on a tour of inspection, by a Professor Bauer the Head of the Clinic.  It is obviously a relatively new place and has more equipment than they ever could need.  For instance, the x-ray department has absolutely a different x-ray machine for every conceivable type of x-ray one could want.  I’ve never seen such stuff!  One machine for skull plates, one alone for chests, another for extremities, one in which the patient can be strapped in and then turned in any darn position that one could want, including upside down standing on his head!

Their surgery, too, was interesting — very well equipped and spic and span.  They had a few x-rays on the viewing box, x-rays of interesting pathological conditions, and they were rare things alright.  We were somewhat astounded by one series in particular.  Remember some weeks ago in “Time Magazine” there were pictures of a remarkable “new operative orthopedic procedure” where some orthopod had, to immobilize a badly fractured femur, driven a hollow steel rod down through the neck of the femur through the whole shaft to the condyles.  The patient was thus able to walk around well on his femur very soon after the operation, instead of lying in bed for weeks and months awaiting healing while in traction.

“Time” said, in that article, that everyone wondered what the ultimate result would be, whether that rod should or could eventually be taken out, and if so what would happen.  Well, there in that Clinic in Heidelberg was the answer to “Time’s” question.  One of their patients had had just such an operation performed, not just a few months ago as had been done in the case of “Time’s” case, but in 1924.  The bone healed well around the rod, and then in 1932 that rod had been removed and the pictures taken afterwards showed the femur to be in excellent condition.

Another interesting feature of the hospital was the extensive physio-therapy department. They had all kinds of physiotherapy methods, hot and cold baths, stationary bicycles, etc. It was quite a hospital alright.

We drove around where the old university is, but did not go through it at all.  Finally headed home after a most interesting day’s excursion.

The last couple of days we were kept pretty busy – on days now and as we were 1st call we were going all day long. In one afternoon we had three bellies and two chests on only three patients. Strangely enough all three bellies were negative, but laparotomies had to be done to rule out any bowel perforations or other damage.

Had a screwy one yesterday – a fellow shot by his own pistol when it fell out of his shoulder holster. The bullet went in his right arm in the middle 1/3 of the forearm and pictures of the arm and forearm revealed no bullet, and yet there was no exit wound. Finally, films of his shoulder showed the bullet under the lateral portion of the clavicle! It had gone straight up his arm without hitting any important structures at all in its path, missing the bone, hitting no vessels or nerves of any consequence! Lucky boy, eh? 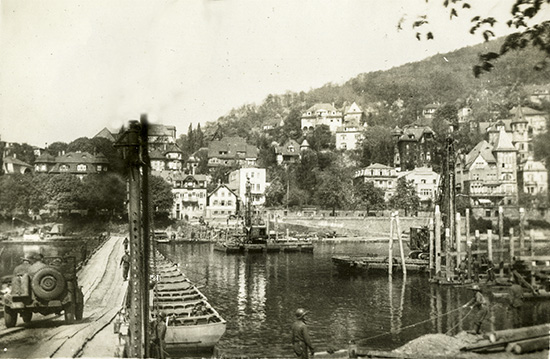 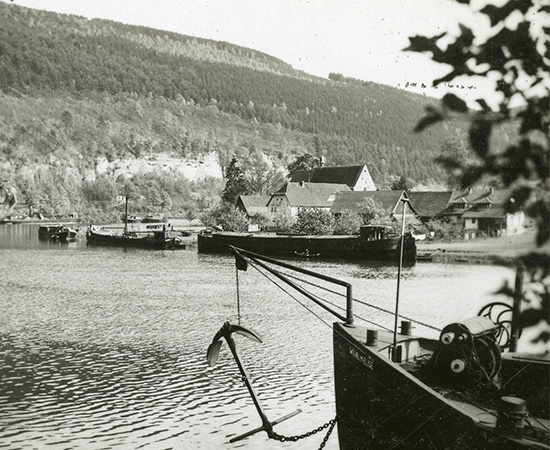 Another view of the Neckar River. 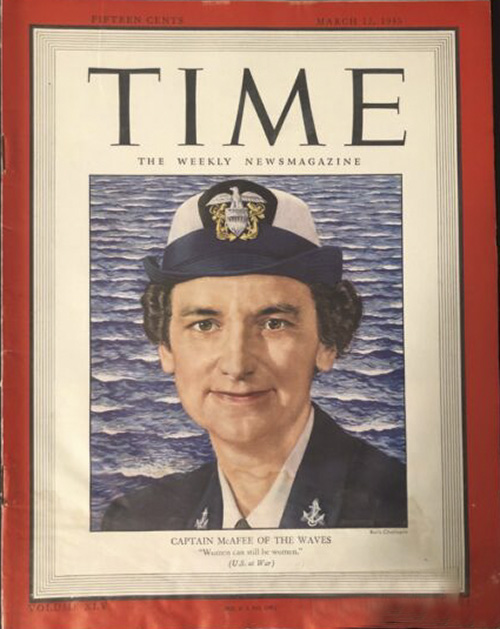 René mentions an article in this issue of Time Magazine with pictures of “a remarkable new operative orthopedic procedure.” But René related that such a procedure (involving inserting a rod through the neck of a badly broken femur to stabilize it) wasn’t really new – it had been done at the Surgical Clinic in Heidelberg in 1924 with great success.