Heidelberg was, as far as damage was concerned, just about the direct opposite of Mannheim.  The only damage done there had been done by the Krauts themselves, and that consisted merely of blowing up of the bridges which spanned the Neckar.  As papers have depicted so effectively, with descriptions and pictures, the Krauts certainly were methodical in blowing up their own bridges.  It is certainly a wonder that they slipped up on that Remagen bridge that gave the 1st Army the biggest break of the war.

Following directions Mattie had given us before leaving, we headed for the hospital where the G.I. Mattie and Phil had operated on two days before was located.  We stopped first to see the Capt. who had summoned Mattie and we had lunch with his group.  They had been engaged in taking over some of those hospitals and in doing some consolidating of patients and personnel and, in their job had, of course, taken over the cellars of said hospitals also.  As a consequence, we had a very good G.I. meal, supplemented by some excellent Rhine wine.

Went over to the hospital to see the young G.I. and to bring him some fruit juice and canned chicken that Mattie had had us take specially for him.  The boy was in what had been the tuberculosis hospital, pretty much on the outskirts of town on the west side of the river.  The hospital was very clean and the room the boy was in was similar to most of the private rooms of any of the S.F. hospitals and got plenty of sunlight.

The boy was a surprise to us too, for we had certainly not expected to find him looking so well after Mattie’s description of how he had appeared when they had gotten there to save his life.  His cheeks were pink, he was terribly thin, but he looked mighty well considering all he’d been through.  Whereas his hemoglobin had been 15% when Mattie first saw him, his hemoglobin before the transfusion he had just had before we arrived was 70%.  Arrangements were already in progress to fly the boy out of there in a couple of days, to a larger field hospital and then to a hospital center further back.

After bidding farewell to the boy, we toured the city.  We drove the Viele Saufer Weg and I also remember seeing the sign of the “Gaisbergstrasse” that you lived on when you were there, Dad. [René Sr. had medical training in Heidelberg in 1904-05.]

Drove, also, up to the Castle above the city and to the big restaurant that sits on the hill some distance above that, looking down over the whole valley.  It was, as I said, a wonderfully clear day and the view we got from the top was amazing.  Tho’ we only looked in at the restaurant on the top, we saw that it was functioning with the waiters in tails and a good deal of fanciness.  The terrifically steep cable cars were not functioning, but they were quite an interesting sight.

We got within the walls of the castle and looked out over the city from its rear balcony, but the actual insides of the castle are not open to the G.I.s, though it is apparently O.K. for the German civilians to go inside.  There are supposedly innumerable art treasures inside. 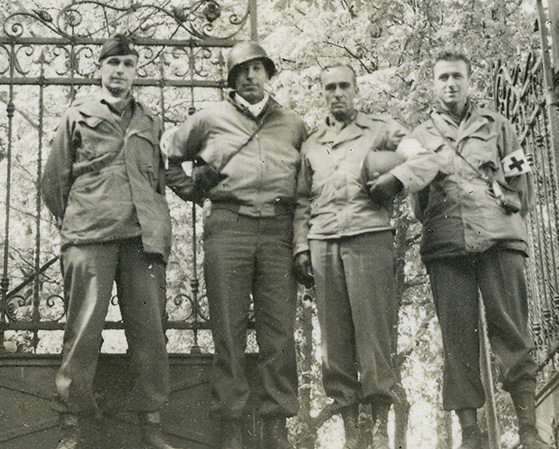 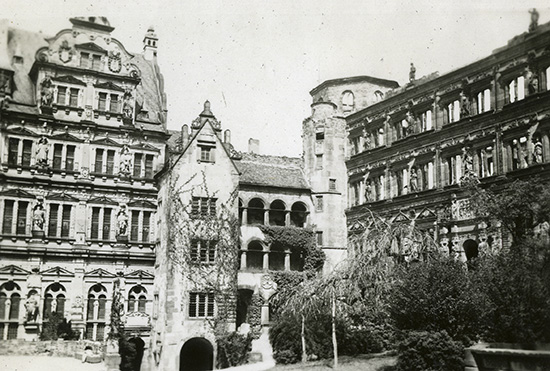 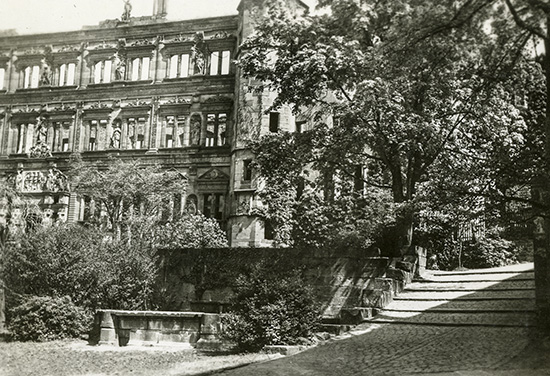 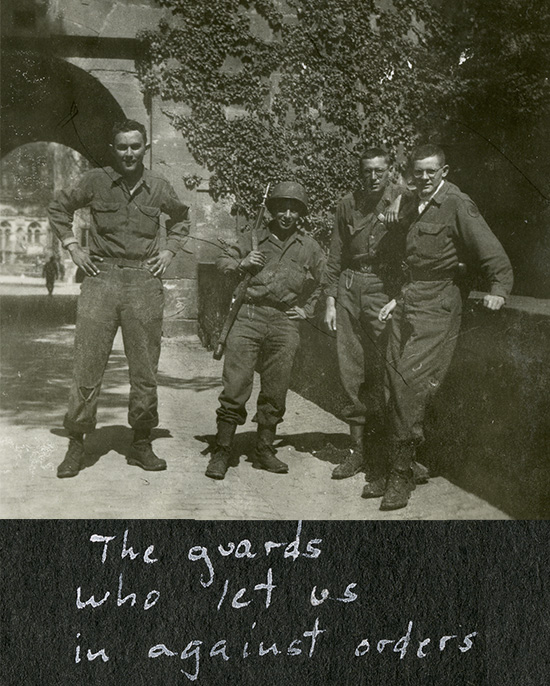 In his letter home, René has to say (for the benefit of the censors) that, because they weren’t German, he and his buddies weren’t able to go inside Heidelberg Castle. But the photo album he put together after the war tells a different story. The caption of this photo on the page with the others of the Heidelberg Castle reads, “The guards who let us in against orders.”