This kind of country would be, and probably was, wonderful golfing country.  There were so many spots I passed that would have made wonderful golf courses that I was all for starting one.  The funniest thing in that connection, however, was at one spot where I said to Collie that the area on our right would make a swell course.  He said, yes, and by golly, there was a good spot for a tee, high above a grassy spot.  I agreed and then pointed out a place that would be a good bunker and a trap.  Then he countered with a marshy spot for the golfer to lose his balls in.  And then, to our amazement, up popped a building and we realized that the place had actually been a golf course and would take little to put it in A-1 shape again.

The spot we’re in is nice and when the sun shines we have a swell view of the surrounding rolling countryside — miles of green, fertile fields with the farmhouses scattered around.  I can’t say, however, that we are any too happy about the weather.  Remember the pictures of the soldiers slushing through the mud of France in the last war?  Well, we can now sympathize with them.  As a lot of the boys have been saying, their fathers told them that there would be days like these in France, but they didn’t say that there would be so many of them!  Yes, it’s a bit on the slushy side at times.

In fact, the outfit that Lynn Rudee is in set up in a nice field only to wake up and find that their shoes had floated away — as they set up in what was more or less a river-bed.  We’re on a slope, so everything drains from our place down, instead of just into our own area.  The ground, however, never dries up, particularly the ground under the tents — it’s moist all the time, even after hours of sunshine.  Thank goodness for boots!  They’re the only type of shoes to wear these days.  Everyone has found that out — even the nurses are trying to fix up their high-shoes with extra tops to make them into boots.

You know how wonderfully cool the white surgery uniforms are?  Well, you can imagine how breezy they are in this cold weather!  I’ve been forced to wear woolen longies (uppers and lowers) under the surgery suits and then still feel a bit coolish.  Now we have stoves in some of the tents — surgery, shock and receiving and x-ray.  The only trouble is that you have to be fairly close to be really warm — but they are a big help. 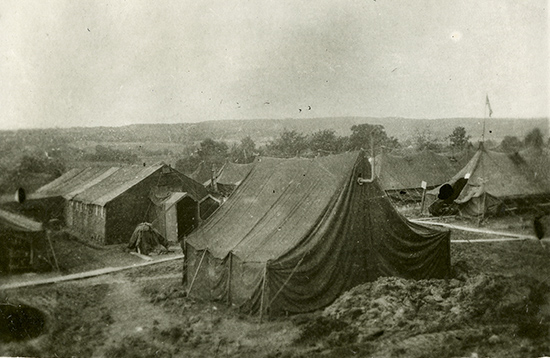 René captioned the photograph above of the cast room and surgery tent “Mud and More Mud.” 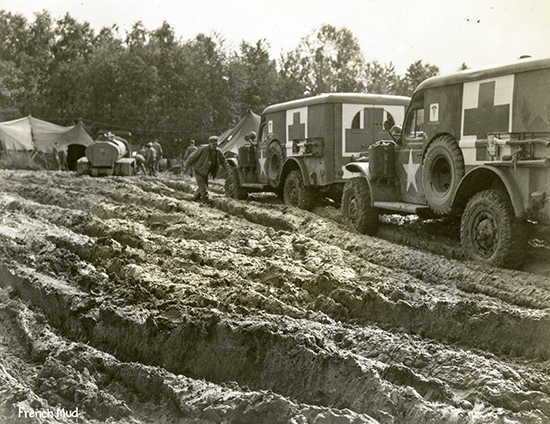 Ambulances in the mud