Well, “Cohn’s Commandos” are back again with the 59th and I must say we were pleasantly surprised to find that they could get going far more rapidly than ever before, and were able to put out the work mighty well and without too much confusion.  When we arrived they had been working all night and so we went to work, so that some could get some sleep. There was a continual stream through surgery, so that only three or four teams were usually working, while the others grabbed much-needed sleep.

It seemed as if we would never catch up, but by noon yesterday everything was O.K.  Mattie then proceeded to institute a new system whereby three teams are on call for 12-hour periods from 12 to 12, each team having their own anesthetist assigned. Paul and I started out as anesthetists, but now we have rather varied and not particularly important duties. We are auxiliary anesthetists, help in receiving if necessary, but primarily see and write up all surgical cases that do not go to surgery, and handle the ward on which those cases go.  Chuck Schwartz is also with us, with much the same duties – sort of auxiliary everything and yet nothing. We are also sort of trouble shooters – take care of emergencies on the wards when the men in charge of that particular ward are operating or otherwise occupied. At present am working on Mattie’s shift of 12 noon to 12 midnight, while Paul is on Wally Greene’s shift from midnight to noon.

The anesthetists consist of Jim Hamilton, 3 nurses, and Schmitty and Hal the dentists. Ham works on the shift Paul is on, so if intra-tracheals have to be given on my shift I’ll have to do them – at least pass the laryngoscope and tube.

When Roy, Paul, Chuck and I arrived after hunting the countryside, after we got the orders to return, we found the gang functioning, though the living quarters tents were not set up yet – however they got that up that evening. Found out that they had started to set up at 9 A.M. and were ready to work in surgery at 4 P.M. of the day they started. They could have taken patients earlier if needed to. Darn good for this outfit, I say. The next move should be even better and faster, i.e. when and if.

Of course, some things were messed up, by Collie as usual.  If you can offer an explanation for his planning and sending all our mattresses and supposedly only 22 cots in the 1st echelon, and the majority of the cots in the 3rd echelon, I wish you would tell me!!  The rest of us, who knew of his plan some weeks ago but could do nothing about it for “The King Can Do No Wrong,” knew how it would turn out.  The cots haven’t arrived yet, so officers, nurses and men, and even the Colonel are on the ground, so that the patients, even the Germans, can have their cots.  Oh, well!  We wouldn’t mind giving up our cots if it hadn’t been for the stupidity of our wonderful Exec. Here we have umpty-umph mattresses, still in crates (for it is stupid to try and use them unless we plan on being in a spot for a considerable time and hold patients quite a while) and a shortage of cots.  The grass is too moist to put the mattresses down without cots, for they would get moldy in no time.  Someday, we hope, they’ll learn!

Watch for more of this letter
September 2, 1944 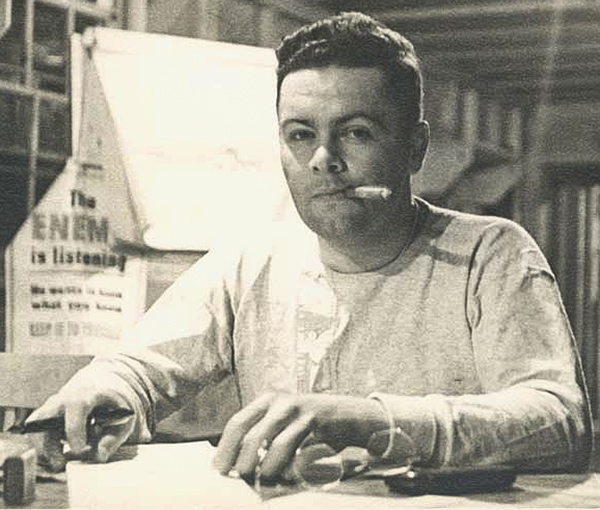 Cohn’s Commandos – comprised of Roy Cohn, MD, (pictured above) René, Chuck Schwartz and Paul Stratte –  landed on French soil 10 days ahead of the rest of the 59th, but have now been reunited with the rest of the unit, near Carpentras. 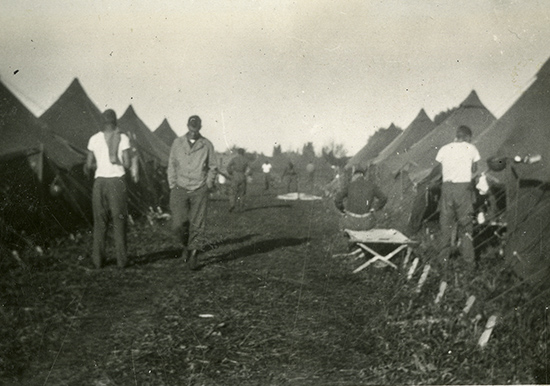 René tells his parents that when they arrived “some things were messed up, as usual.” For example, he tells them that “the cots haven’t arrived yet, so officers, nurses and men, and even the Colonel are on the ground, so that the patients, even the Germans can have their cots.”
Pictured above is Sewell Brown, MD, in the officers’ tent area. 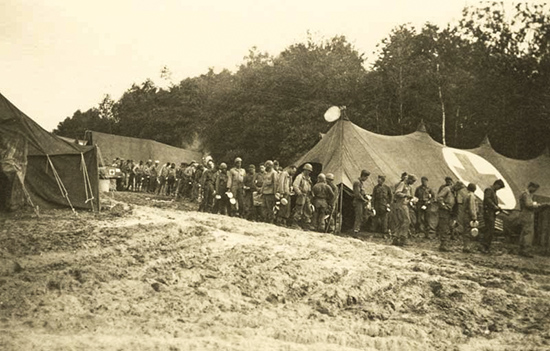 In line for lunch. 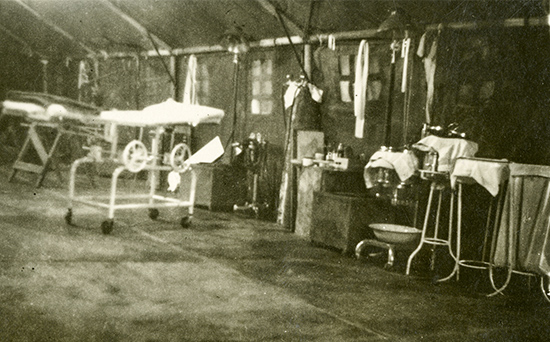 Inside the surgery tent, where René is working as an auxiliary anesthetist.