Am now on the “swing-shift”, Mattie having changed everyone around again when we hit a twelve-hour slack period, and one group has been able to sleep well during the time that they usually were operating. Still working with Wally and Carroll, now on the midnight to noon shift. Someone called off the dogs on us late yesterday, so that we haven’t had to work at all this A.M., except in the ward. Had I known that I wouldn’t have to get up at midnight last night, I could have been more hospitable to poor Lynn who came over to see me about 6:30 P.M. last nite only to find me asleep in bed. He awakened me and we talked for about 3/4 of an hour until he felt conscience stricken and took off so that I could go back to sleep.

Bambi was over yesterday also and she said that Leon Michels was planning to come over in the next couple of days. She says they’re in buildings at the moment, and not doing anything of consequence at all.

Kay Magee finally did get her orders to go home on rotation and took off a couple of days ago. How long it will be before she actually gets to the U.S. no one knows, but she should be getting to S.F. sometime in the next two or three months. I don’t believe I ever told you, but she has been engaged to one of our Sgts. for many a month – Al Querhammer, from surgery (used to be an undertaker in Chicago) – and outside of his roommate Sgt. Carson, I’ve been the only one in the outfit that has known about it. I’ve had to censor his mail so that no one else amongst the officers would find out about it.

Watch for the conclusion of this letter
October 20, 1944 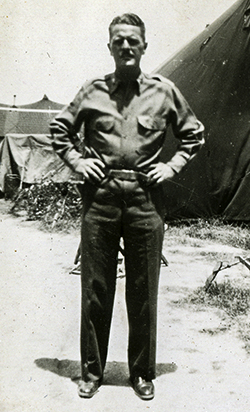 Mattie (Carleton Mathewson) has changed the schedule, so now René is on the “swing-shift”. 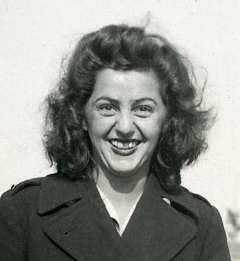 Bambi (Charlotte Bambino), who transferred to a field hospital in September, stopped by for a visit at the 59th. 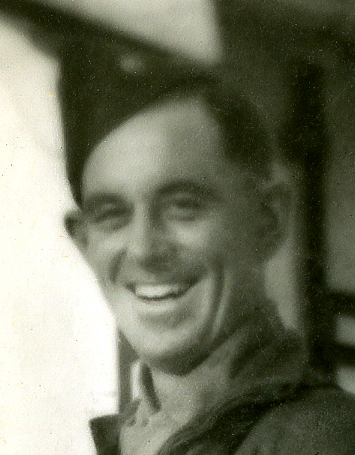 Sgt. Al Querhammer is secretly engaged to Nurse Kay Magee, who just recently got her orders to go home on rotation.