Since my last letter, I have been kept on the go, as you might well imagine and we never seem able to know what day of the week it is. Only those that make it a practice to visit the Padre weekly are the ones who really make use of the old “Monday, Tuesday, Wednesday” stuff. We others stick strictly to the day of the month and let it go at that.

Have had a number of interesting cases, but for some reason they seem to get to our table just at a time so that we will have to work overtime and miss both shower and movie. Two nites ago, the only nite we did get off in time to get into the show (the 1st reel was almost over at that), the show turned out to be a stinker.

Had another splenectomy – a boy who was unconcernedy sleeping in a house in a town by the front when a shell burst beside the house and the concussion made the roof of the house fall – and it fell in upon him as he was lying on his right side. He was unconscious for an unknown length of time, got into us about 14 hours after the injury and was in pretty good shape, despite the large laceration in the spleen that we found on operation. He’s doing pretty well.

Had another fellow with everything from soup to nuts —  had a fragment in his bean with a depressed skull fracture, fragments in his shoulder, hand, thigh, knee joint, and lower leg with a fractured tibia. It’s strange, however, how little damage, relatively, a lot of fragments or big fragments can do, whereas every so often the smallest “wouldn’t hurt a mouse” type of fragment will do all the damage one could possibly imagine. It just depends on where that fragment decides to travel – into the belly, the head or through a large blood vessel.

Ralph Cressman had a case the other nite where a small fragment had gone in and just nicked the femoral artery in the middle of the thigh, and when Ralph went in to clean up the tract he saw what he at first had thought was just a damaged piece of muscle, but when he cleaned it off a bit and saw the darn thing pulsating, he found that it was a true aneurysm about 1 cm. in diameter.

Watch for the conclusion of this letter
November 16, 1944 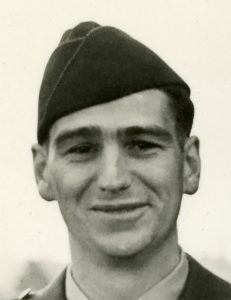 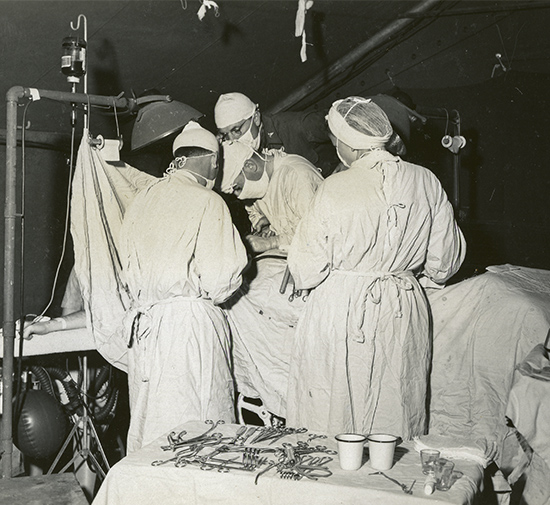 René tells his parents that the surgical team he is on has been working overtime quite a bit, which means they often misses showers and movies.