Here it is Sunday night and Lois and I are down in Supply again pounding away at the typers. Things have slowed down considerably as far as my business is concerned, but Lois is still going pretty much full blast. Somehow she manages to tear around her wards like mad continually and tho’ she is constantly claiming that there has been nothing accomplished by her that day, she actually has done more than any other two nurses could or would have done in her position.

Time out for the moment –- we are having a picnic down here. This room, which used to be George’s and is now Wyzogski’s, is a meeting place for the Supply-Utilities gang often, and now Ehrbacher, the baker, is down here trying to get the 1st Sgt. on the phone to tell him, and have me tell him, that Ehrbacher can’t work for a couple of days. Ehrbacher is somewhat on the polluted side at the moment, but funny as can be — with his lisping when sober you can imagine how he is when in this condition. Anyway, what happened to him last night was really a kick.

Some Italian civilian came into the Nom-Com’s Club to tell the men that some soldier had fallen through an old bomb-crater in the roof of the building and was lying hurt on the second floor. But poor Ehrbacher didn’t like the Italian’s looks or something and, being drunk, he took out after the poor Italian. The latter went out the swinging glass paneled doors with Ehrbacher after him, but the doors closed and swung back just as the “Baker” came up to them and they knocked the “Baker” back on his sit-down with glass flying in all directions, most over him. It apparently was quite a sight — and Ehrbacher hasn’t quite recovered from the incident yet.

More about the Italian. Some poor duck had fallen through the roof of the building. I happened to be over in the 1st Sgt’s office at the time, Lois having gone to bed early, and when someone came in and told me about the fellow, I went and investigated and then had him brought over to Receiving on a litter. The fellow had fallen about 15 feet, but how he had gotten on the roof in the first place, no one knew. He was under the influence, obviously, but it wasn’t until one of our Receiving boys got real smart that some investigating was done. It was found out that the guy had escaped from the psycho ward of another hospital, had gone out and had himself a good time, and then got lost in our buildings trying to find his way back to the other place. What things won’t happen here??? 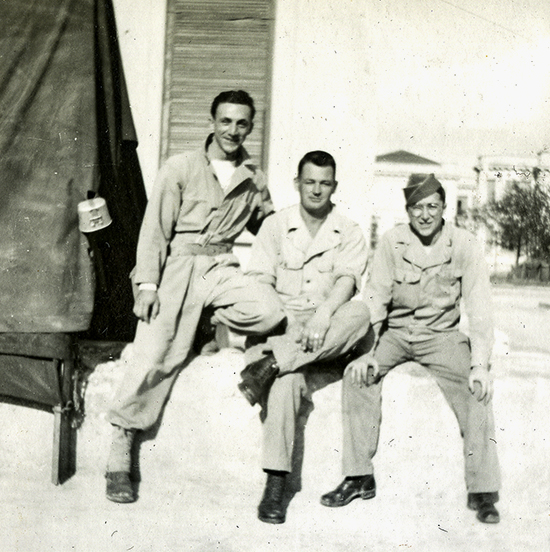 René and Lois are having a picnic in Wy Wyzogski’s room in the Supply Department. Wy is on the left in the photo above, with fellow supply men Charles Weistenberg, aka Weisty” and Harold Dinsmore, aka “Dinny”.

Herbie Ehrbacher, the unit’s baker, is quite a character. 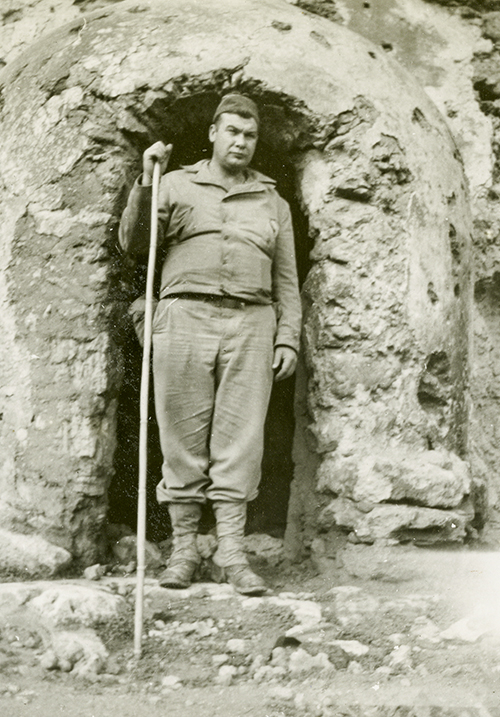 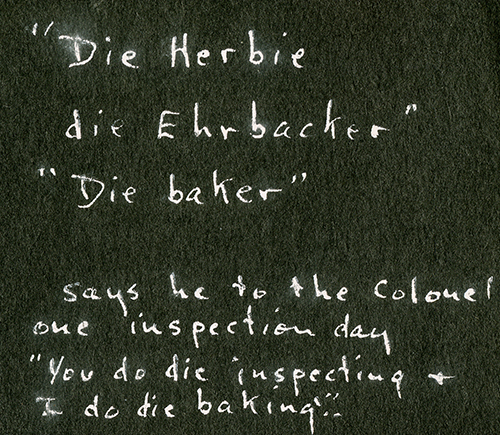