I can see that this is going to be some letter. I’m trying to type this in our tent and it is 7 P.M., and it looks as if Bish, Jack & Roy are contemplating consuming most of what is left of the last liquor ration, since there’s nutting doing. Tonight was the night that the “Gang-Greene” was supposed to go on nites but…

We have had some wonderful weather the last few days and today managed to get a start on the season’s sun-tan while waiting in line for a haircut. However, the nites are still considerably on the chilly side.

Yesterday morn, Bish, when he finally got up, had to toss Jack’s and my shoes back to us, for – Bish had awakened and yelled at us, “Hey you guys, aren’t you going to get up! It’s time to get up! Time for breakfast! “ And then, in a lower tone, “My watch has stopped. What time is it?” Well, it was only 6 A.M. !!! Nuts!

Several of the gang have wandered around a bit and quite a few got into Saarbrucken the day after it fell. The stories they brought back about its being a complete wreck were, in a way, good to hear. Don’t have anything against the city, of course, but when we remember the wrecks that were Bizerte, Formia, Cassino, and other spots, it’s good to know that all that has at last come home to roost in Germany itself. The boys say that Bizerte was nothing compared to this town. Had I not been on duty, I probably would have accompanied some of them there, but may get there some other time.

Some more of the bunch have been getting to Paris of late – Paul and Kuzell went together and now Bell and Hodgson are there with a group of the men. However, the latter were lucky enough to go by train. In this weather, however, going by truck wouldn’t be bad – I’d rather go that way anytime, but the train deal is, of course, the cleanest and easiest.

Yesterday was cosmopolitan day as far as letters received was concerned. One from George in Marseille, one from Claudine in Paris and one from Jacqueline in London. 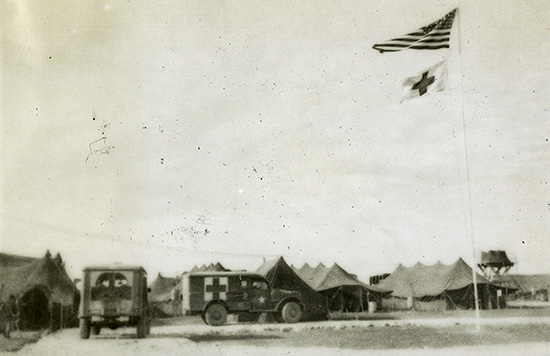 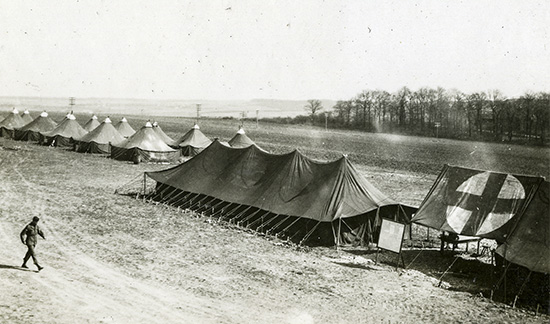 Officers’ and Nurses’ Mess Tent with Officers’ Area in back. 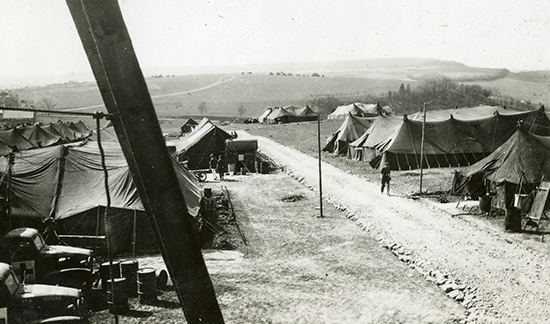 Road between Surgery and Red Cross Tent. Supply in background.