There’s so darn little doing as far as we’re concerned that ‘tis difficult to find things to write to you – don’t have any opportunities for interesting conversations as you do. They’ve GOT to put us to work soon!!

We have been spending a lot of time around the radio of late, what with all the good news coming in, the advances being made by the 1st and 9th Armies and now by friend Patton. Can just imagine Patton being good and mad that the 1st was able to cross the Rhine before his gang! I’ll still bet on his being in Berlin, or, better, getting to Hitler first!

We’re still stagnating, tho’ yesterday we tried something different.  One of the buildings in the area has been fixed up as a gym by the other outfit and they have in it a basketball court.  So yesterday, the officers had a game vs. the enlisted men.  The game broke up, however, before it was half done, when the ball got stuck up on the basket, and, when Stratte jumped up to knock it down, he grabbed ahold of the basket and the whole bloomin’ frame to which it was attached came down — just missing Paul by a hairs-breadth.  The metal basket was thus busted and was taken down for welding, so that was the finish of the game!  It was fun, and definitely exercise, while it lasted.

Oh yes, the Col. has a new ribbon! He, along with some other COs of hospitals has been awarded the Bronze Star for “the work of the hospital in direct support of combat troops from Sept. 1st to Dec. 31st.” Col. Weller of the Sacramento bunch got same also — despite the fact that they were in hot water with some generals for some time, and that Mattie had to straighten them out in September, etc. etc.

Westdahl got back from Paris and apparently he was really able to work the angles. The course he was attending took up his full day for the 5 days of the course, but he was able to get extra days of leave specifically to visit his brother’s grave, which was up by Cherbourg. So he got to see more of the country, used various means of transportation and had enough extra time in Paris itself to really see it well. We were all mighty glad for him.

Serge got his first letter from Ann yesterday – she was in Stark General Hospital in Charleston. She ought to be heading west pretty soon. The way she wrote the address of the hospital was really funny – Serge is writing kidding her about it now, for it looked as if she wrote Stork General. Most appropriate at any rate!

Received, and read completely, yesterday, the book Mrs. Holmes sent me, “High Time”. ‘Tis really a scream. It is already well on its way to making the rounds of the other rooms. The other book she sent me was read by almost all here and now is going the rounds at the 180th Station. Thank Mrs. H for me, tho’ I shall most likely get a note off to her soon. Received, also, socks from Henriette – swell and thanks.

Another “received” was the package from Mom with artichokes, deviled ham, and chopped olives.  Thanks!! Ate some asparagus the other night and artichokes last night. They went well with the mayonnaise that Carroll had. Yes, have again been having evening “snacks” after the movies and before the 11 P.M. news comes on.

Mom, I’m glad you were able to get some things for Dominique. They also have little sugar, no chocolate and no decent coffee (French coffee is horrid).

All for now, and Serge is pestering me to go out and freeze to death with some others playing volley-ball…. 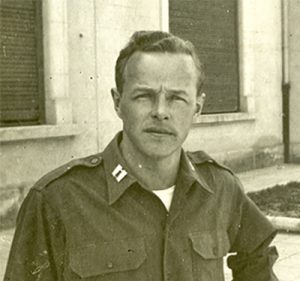 Paul Stratte had a bit of an incident during a recent basketball game. 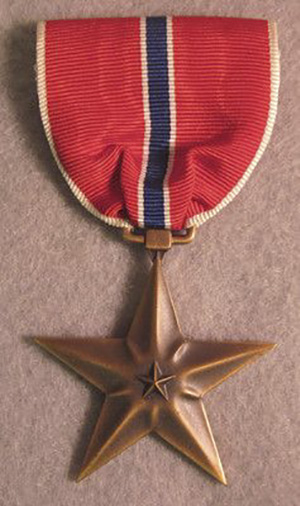 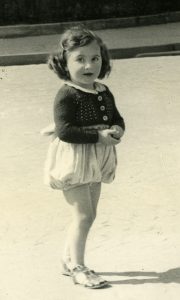 René thanks his mother for sending some things to Dominique (above) – the daughter of Claudette Baumann Aaronson – who lives in Paris.