Yep, I’ve been a bad boy again, but unfortunately due to circumstances beyond my control for the most part. I admit that I could have scrawled a short note to you by writing on the fender of the command car, but it would not have been mailed until two days ago anyway, so ‘twould have been almost useless. Every day I kept thinking, well, tomorrow I’ll be where I can get a typer and then I can write, but things were most exasperating, as I shall forthwith describe.

At the last station I continued busy with the V.D.s and occasionally busy at nights as Receiving O.D., swimming a few times, reading and sweltering. I managed to make a couple of more trips to Rome, but did not have time to do much sight-seeing.

Just a few days after writing the last letter, things started popping and we started cleaning house rapidly, but this time we went in reverse — it’s the first time that the gang has retreated or retraced footsteps. Things were messed up again this time, though nothing like when we first got to Italy. This time the fault was not really with our outfit, but with the bunch that was supposed to move us. Of course, with Collie and then Vallar as Forward Party this time, along with Morduant (the latter did O.K.) everything in the new area was sort of a jumble. Result: a shake-up. Bishop is now Detachment Commander in place of Vallar. Jack Dunlap is Adjunct. Bish is instituting several new things in his new capacity, some good, but also some not quite to the taste of the men. One Sgt., a damn good one, already turned in his stripes, as he can’t get along with Bishop. But…I’m getting ahead of my story.

As I started to say two paragraphs up, transportation was our main difficulty. I happened to be playing bridge with the Col., Bell & the Padre when the Col. got the call about us being on the go. Mattie, Gerbode & Cohn were up near the front at the time, visiting our former neighbors from Africa. The Col. decided that I should be the rear echelon along with Fadley and Dunlap, so soon all the officers and a good part of the men had gone. However, the Old Man decided to stay awhile himself until he got enough transportation to move at least a good percentage of our stuff. He figured that with rank on that end of the wire, it would be better than just a Capt. yelling for transportation if there was any trouble.

But the funny part of that was that one day when no transportation was in sight – after the officers had gone, he decided to take off sight-seeing to Rome with Jack, as neither had been able to sight-see there at all. While he was away, Fadley and I decided to try our luck with the phone. Finally, after several hours of trying to get through, we managed to succeed and got a promise of transportation. All without the aid of the Old Man’s rank. Actually, the Col. was swell while he was here the few days, with just the three of us other officers. It all went to prove to us, at least, that if we were able to get rid of that burr (Collie) that is always sticking under the saddle and needling the Col., everything would be 100% better and the Old Man wouldn’t be a bad egg to get along with. Fad and I were very greatly surprised too, when it came time to load, when the transportation finally arrived, that the Col. didn’t even come around – no suggestions made, and it was all left up to Ken and me.

Then, when the greater percentage of our stuff was on its way, the Col. took off with Jack in his command car, leaving Ken and me with a command car and a small group of men. We expected to be able to get out the following day, so what do we do, but have all tents down, move out of our sleeping places to the area where we had the one truck and the command car parked, near the remaining equipment. Were we ever fooled! Instead of sleeping there, out in the open, the one night, we were in the same spot for some 4 days. It was really a scream! Each a.m. we would pack up our sleeping bags, fold up the cots and stuff things into the command car and then that night, with still no transportation in sight, we would have to unfold and set up the cots and sleeping bags again. Naturally, as such things happen, when we finally got disgusted and in the a.m. said, “To Hell with it, we’ll leave our stuff set up today as we probably won’t leave today!” sure enough, we were out of the place just after noon.

We had quite a long ride, but it was pretty comfortable in the command car, top down. Ken and I had gotten pretty darn black in those last few days and the wind on the way down served to intensify that blackness, so that they were ready to put us with the Goumes when we arrived. Of course, we were kidded because of our supposed “furlough” while all others had been down here straightening things out and working pretty hard.

One thing we had those last days there alone was excellent food. Our Mess Sgt. had, just before the biggest share of the gang left, drawn enough food for that big a group and a little more — and as a consequence we few that were left lived like kings as far as food was concerned. We managed to have eggs fresh, fried, for absolutely every meal for several days – breakfast, lunch, supper and evening snack if so desired. And, what’s more, we didn’t just have two eggs per sitting but from 3 to 5 eggs per sitting. Those were the first eggs we had had since leaving Sicily and even the 5 per meal didn’t make us tire of them. (If I get hardening of the arteries, now, you’ll know why!) 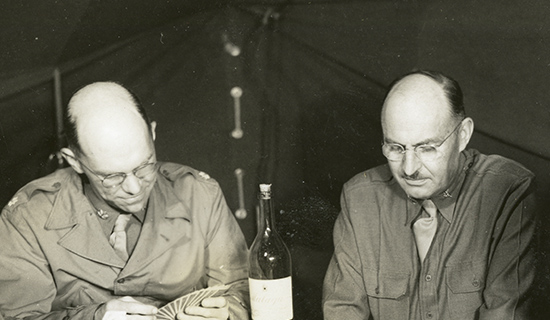 René tells his parents that when William Collie (shown above at left) “that burr…always sticking under the saddle,” was away, the “Old Man” (Colonel Oral Bolibaugh, shown above at right) was “not a bad egg”. 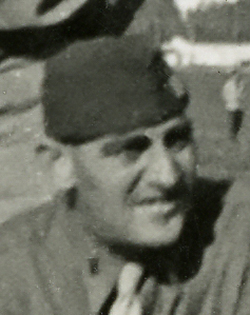 René and Ken Fadley had quite a time together waiting for transportation to the 59th’s next location in Italy.