We are really under a mighty cold white blanket now, with several inches of that white stuff all over the ground and buildings.  Our boys were out freezing their hands off this morning putting chains on all their trucks, for it looks as if they won’t have occasion to take them off again for at least a few months.  Slush, slush, slush!! From our quarters to our mess or to the main portion of the hospital, we have about the equivalent of 2-1/2 S.F. city blocks to walk, and it is amazing how cold one’s face and ears can get in that short a time, and if one is foolish enuf to forget to take his gloves with him then he has to spend about 10 minutes trying to thaw them out before picking up a tray at the mess.

Sure, it’s all very pretty, but I’d prefer Yosemite’s snow when the sun shines at the same time. Our quarters are up on a rise above the men’s quarters, the motor pool and the main portion of the hospital, and the road leading down has a nice gradual incline that would be just perfect for beginning skiers or for re-learning.  If we can dig up some skis we will very likely move the vehicles out of the way and go sailing down our little hill on the way to meals, etc.

Gert Brazil and Bertha Moore were the first to get the “Snow-Man Craze.”  They were out bright and early this morning starting to put a Snow-man up in front of our quarters.  By noon they had only reached the chest and I can hear them out there now putting on the arms and head.  Perhaps by supper-time they will have it completed.

As for skis, we now have one set in the whole outfit – Bette Holmes Richardson got a pair when on her honeymoon up by the front lines. However, Fred Jarvis, who is in the same outfit as Leon Michels, told us a few days ago that the unit he is with is set up in what used to be a ski-lodge and that there are something like 100 pair of skis and ski-boots in the basement of the place. We are seriously contemplating paying them a visit!

It looks as if Mattie is going to get well in a hurry now that he has heard that there is a good possibility of getting some skiing in, as he is quite a ski enthusiast. There were a bunch of us down in his room last night and as Bette is specializing him, she got us on the subject of skiing and from then on that was the only subject for about 2-1/2 hours.

Yes, Mattie is back with us – in his own room, but as a patient, of course. It’s all a funny business, somewhat unexplainable to say the least. It is sort of as if he were loaned out for a couple of days – at least that’s how it worked out, tho’ it wasn’t planned that way at the start. Nevertheless, we are mighty glad that he is back under our care and thus can’t get too far away.

Remember the story about the two guys who took a room with a bath at the Chancellor Hotel, ordered fishing-tackles, fish from Bernstein’s and then proceeded to catch the fish in the bathtub and then have them cooked?  Well, they have nothing on the “shell-shocked 59th”!  Someone walked into our Headquarters office two days ago and there sat Jack Fry, our Master Sgt., leaning slightly over his desk with a concentrated look on his face, his forearm and wrist flexing slowly every few seconds, with his hand closed over nothing but air.  He was asked, “Why Sgt. what are you doing?” To which his reply was, “Shhhh, quiet!  I’m fishing.”

Another package arrived today – Thanks oodles for the artichokes, caviar, olive-spread and the two T-shirts. All arrived in good shape.

René tells his parents that they “are really under a mighty cold white blanket now, with several inches of that white stuff all over the ground and buildings.” 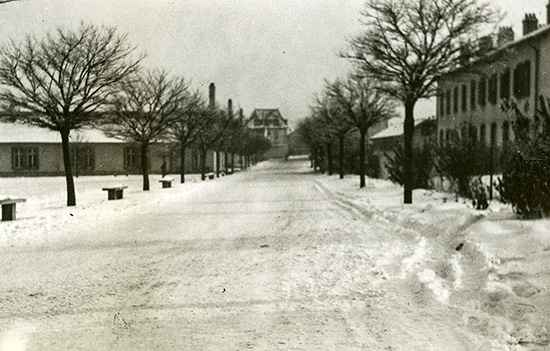 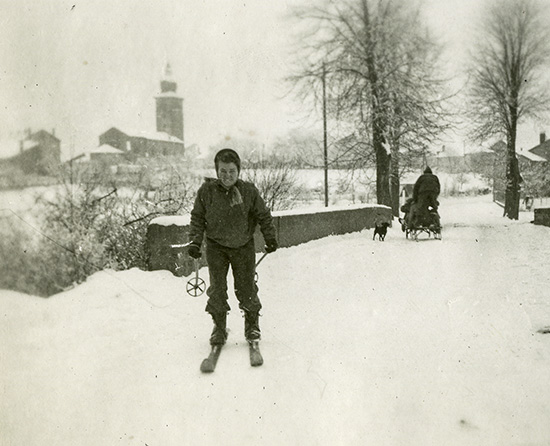 Bette Holmes Richardson putting the skis she got on her honeymoon to good use!