And still the snow falls!  We’re really under a blanket now!  In fact, I guess that most of France is pretty white right now. It’s hard to realize that actually when one considers latitudes, the whole of France is pretty far above any of the places in California, and consequently this type of weather should be expected. But that doesn’t mean that we have to like it! The poor boys up at the front must really have an awful time in this stuff.

So far have not ventured to find the ski-lodge and the skis, but our ingenious Bret Smart, with the aid of Chuck Schwartz, has built a sled that will seat four to six people and it seems to work mighty well.  It is made of some discarded iron pipes, welded together to form the framework of the sled and they have used some iron pieces that were intended for walking-irons on casts (which Evacs, when functioning as such, never use) as runners for the sled.  The front steering section is fitted to the main body by a large bolt, and they can really maneuver pretty well.  In fact, they took the sled on a trial run a couple of days ago, pulling it behind a 3/4 ton truck and they went for about six or seven miles with great success, no mishaps.  Our little incline to one side of our quarters they are now altering with a “sled-run” along side the main section of road, and they have been pouring water on it to make it more icy.  When they get it completed they will just about be able to run a taxi-service from our quarters to the mess-dept.

The gals who were working on the snow-man decided to turn it into a “snow-lady” — and we don’t mean that it’s no lady either.  ‘Tis mighty fancy, complete with arms gracefully in the air and a fancy (permanent) hair-do.  It has now been standing out in front of the quarters for three days and it looks as if it will last for a long time.

The last couple of days have had a few little things to do, but not enough to keep us from sitting around our quarters tearing our hair. Would like to walk but ‘tis not too pleasant in this weather. We’re kind of holding the sack at the moment.

In fact, we’ve even been reduced to playing cards of late – do you know the game of “Tripoli”? In case you don’t, it is a combination of poker, Michigan and Hearts. Have had a couple of sessions in Carroll’s room with Carroll, Walt Byers, Edna Haertig, Gert Brazil and Ann Dunn. Such gatherings are also good ways for all of us to dig into our food supplies and reduce the contents of our barracks bags very enjoyably. Everyone contributes and we end up with some of the darndest concoctions of foods.

Tanks for packages received in the last couple of days!! Yours, Mom & Dad, with the film, deviled ham, and the long wool socks. Have your long tan ones on now, Dad, and my tootsies are very comfortable. Sal’s pkg. full of tea and caviar also arrived – thank her for me – what a supply of food we have now.

Time out – Ann Dunn Bryner over in our room at the moment and we are just delving into my soup supply – Ann has just picked for tonight’s menu, the pea soup. And while on the subject of Ann – gave her those long woolen socks you sent – for which she thanks you muchly.

Latest news on the re-arrangement and promotion front: Gerbode apparently to get his Lt. Col. and the title of “Chief of Professional Services”. Rumor has it that Roy may leave to be Chief of Surgery in a new General Hospital. He will be a big loss if ‘tis true. Gill Bishop acting Exec., for which all rather glad, for he will do a better job of that than Frank would do. ‘Tis quite a break for Gil.

Today received a package from Jean-Pierre – a small toilet-article kit, oil-cloth type that he carries in his line, and is just the size that will not only hold my stuff, but will fit in my musette bag.

Ann also chose olives for tonight’s repast – i.e. chopped olives on little pieces of toast she toasted on the electric heater of Serge’s while the soup is cooking on my gas stove. Just about time for the repast, so shall quit for now. 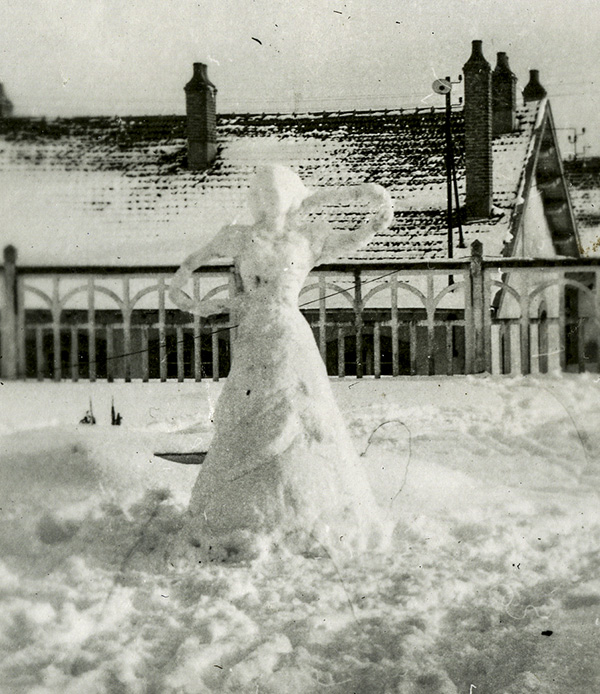 René’s caption for this photo was, “Snow-girl made by the gals.” 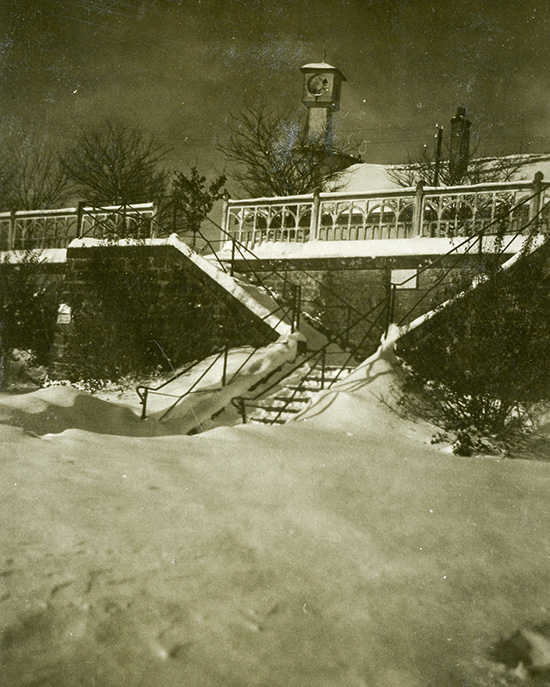 Snow blanketing the stairs to the officers’ quarters.