It all came about this-away, Serge and Ann Bryner had left for Paris (loaded with some things for the folks), three of the nurses were scheduled to have their leaves in Paris and the phone rings for me, ‘tis the Colonel. Says he, “René would you be interested in going to Paris with a group of enlisted men?”

When they picked me up off the floor, I managed to respond with a “Definitely!!!” I got some of the details from Bish and then hurried to see Del Peche and Pat Barry, who were leaving early the next morning. Del promised that she would phone Jeanne for me and warn her to be sure the family would be in town. I wanted to go up there and walk in on them all unexpectedly, but I was afraid that that might be too risky, for I might not find them at home.

So, on Sunday, bright and early, (really shouldn’t say ‘bright’ for none of the days lately have even approached being ‘bright’, and we actually left before dawn) we took off in our one and only closed weapons-carrier (3/4 ton).  There were five of our enlisted men, (Sateja, Dye, Vezie, Rogers & Cella) the driver (Harry Sharp) and myself, plus gas and rations and a barracks-bag apiece.  Besides that, we had to pick up supposedly two more men in another town from another outfit. When we got to this other town we found that there were actually four more men with orders to accompany us in our transportation. Somebody mixed things up somewhere, but we managed to pile all the fellows in and they were set in there like sardines.  The truck ordinarily holds eight people in the back with a minimum of equipment, so you can imagine how it was with nine and a considerable amount more than “minimum” equipment.  As a matter of fact, the gas took up most of the room — gas for the trip to and from.

The day was plenty cold and we were driving through snow-storms a good part of the day.  The road, ordinarily a fine road in good weather, was piled on either side with snow and there was ice in the middle.  We were all dressed warmly, as we had expected the coldest possible weather, and so none of us suffered.  The boys in the back, of course, were packed so snugly that they couldn’t possibly be cold, and Harry and I in front had the engine to warm us up slightly.  We even did some sweating, the two of us, when we would hit some of the icier spots and feel the rear end of the truck start a-swaying.  As a matter of fact, at one spot, we did find ourselves completely turned around and backing toward Paris before the truck decided to come to a halt.  We were mighty happy that there was a minimum of traffic on the road that whole day. Also, we were glad that the road was a good road to begin with — only one small section of mountains (hardly dignified by such a name in the U.S.) and nothing but shallow ditches on either side of the road, in case one did find oneself landing anywheres off the road.

Anyway, we arrived in Paree, in very good time considering everything, and with no mishaps.  I had a small map of Paris, but I hadn’t been able to find on it the street we wanted to get to — the street the American Express Building is on and where we had to report in.  After stopping and asking a couple of M.Ps and getting no aid, I decided that I’d head for the Place de la Concord and the Opera House, and though I couldn’t find the street on the map, I knew it must be around there somewheres.  Sure enough ‘twas!  Gee, everything we passed seemed so familiar that I was amazed!

We got checked in and got the boys assigned to rooms in one hotel and myself to a room in another, the officers’ one.  The Red Cross has done a mighty nice job there for the men coming to town on leaves.  They have taken over several hotels, have named them “such-and-such-Club,” and have certain ones for the enlisted men, some for the officers and one or more for the nurses. The one I was at used to be the “Hotel des Deux Mondes” on rue de l’Opera. At each one of these hotels there are American Red Cross gals who dish out information, arrange tours, see that the men get tickets to tours, theaters, etc., that they are directed to the various places they want to get to, and they even arrange for shopping tours or walking sight-seeing tours with English-speaking French gals. 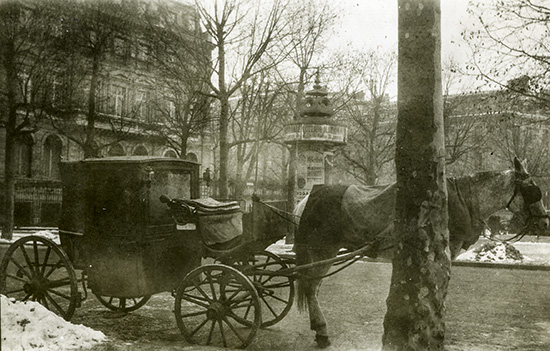 René finally made it to Paris — with a group of enlisted men on leave. This is a photo he took of a horse and carriage, near the Arc de Triomphe. 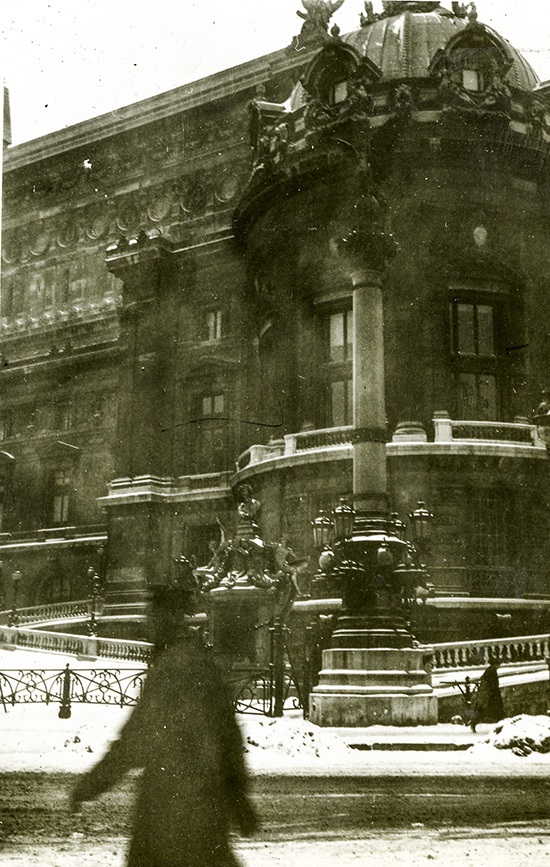 Driving through Paris, looking for the American Express Building, where they were supposed to report in, René headed for the Opera House, a landmark he remembered from his family’s visit to Paris when he was a child. 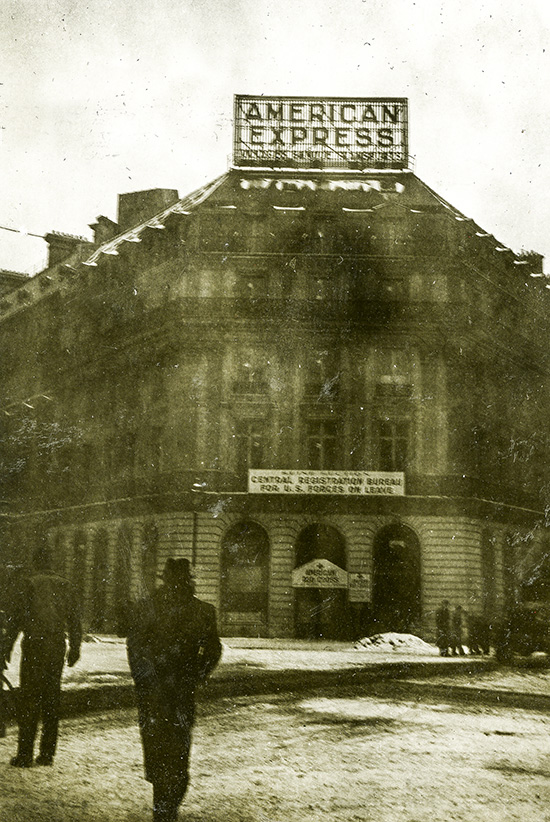 Ultimately they found the American Express Building, where they checked in and got their hotel assignments.