After getting the boys settled in their hotel (a guide was furnished to show us where each hotel was) Harry drove me to mine and then took the truck and parked it for the period that we were in Paris, as you are not supposed to use it while there. I dumped my things, got slightly cleaner and took off via the subway to Jeanne‘s.  I had no trouble finding the place, getting there a little after 5 P.M.  I was greeted by a good-looking blonde gal and ushered into the living-room where, tho’ there were several people there, I had no difficulty in recognizing David.  He was really glad to see me and we had quite a talk.  Jeanne was not at home, but they phoned her and it wasn’t long before she came puffing into the room — she must have run all the way…

I must say that David’s appearance was a great shock to me.  I remember him as being a healthy-looking, dark, rather round-faced individual, with rather a robust figure.  Well, he is still dark, and that’s about all.  He has some gray hairs, but not an awful lot.  His face is thin and drawn and he does not look well.  He said that he had lost some 40 pounds (over just what period I don’t know) and he looks it.  He has been ill and at home now for some six weeks and regrets having come back to Paris, as Nice would have been much better for him in this weather.  Also, he feels badly that they are forced to impose upon their friends for lodging.

Apparently, from what I could gather from David, he doesn’t have any parts drastically injured, no conniption pins missing or the like, but the works just need a good winding up.  His principal symptoms are gall-bladder in nature and he also has had joint pains, low-grade fever, etc.  He is supposed to be on a fat-free diet (they have little fat anyway), takes belladonna and some extract of artichoke (something new to me!) He apparently has had x-rays that showed nothing more than the sand in his gall bladder, which he knew he had from x-rays in the U.S.

As I told you before, his business had been kept up by his secretary — not exporting, of course, but selling things in France. He had, you see, sold the business (at least on paper) to his secretary and now she will sell it back to him the same way.  Their principle line at the moment is handkerchiefs.

Financially, apparently they have enough to get along on very well.  David had been owed some money by a firm in New York and he had just received $500 from them a week or two before.  As a consequence, he said he absolutely did not need the $250 I offered him.  He said the others did not need it either.  As they all said, the things they need most at the moment we are unable to get them — that is wood and coal to keep them warm.

Some things that David would enjoy are a couple of good American books. I am sending him my “Razor’s Edge” as soon as some more of the gang venture up to Paris. I think Treadwell is going up next week.

Whereas I was shocked at David’s appearance, I was amazed by Jeanne’s.  She really looks fine.  Her hair is all gray but she certainly does not show any of the results of the hardships they went through.  She claimed that if she had seen me in a crowd she still would have recognized me – not only from the pictures, but actually from her remembering me from way back.  She says I haven’t changed in all this time, so if that is so, I guess you folks won’t have much trouble recognizing me after all this business is over over here.

Jeanne apparently is in good health, and from what David said, she was amazing all the way through, in the way she got them out of some tight places, etc.  I don’t know whether you know it or not but before she, Jacqueline and the baby got out of Paris, they were in prison for 10 days. Then, later, in Nice, when she and David were taken, she got them out of a hot spot by acting cool, calm and collected and coming out with her snappiest remark.  It seems, when they stripped David to see whether or not he was circumcised, he still was able to deny that he was — sort of dumb Nazis, I should say. And then they tried to get Jeanne to admit that he was.  They said, “Why surely you must know that he has been circumcised!”  To which she replied, “Why?  How should I know? I haven’t had anything for comparison!” And so they were let free! 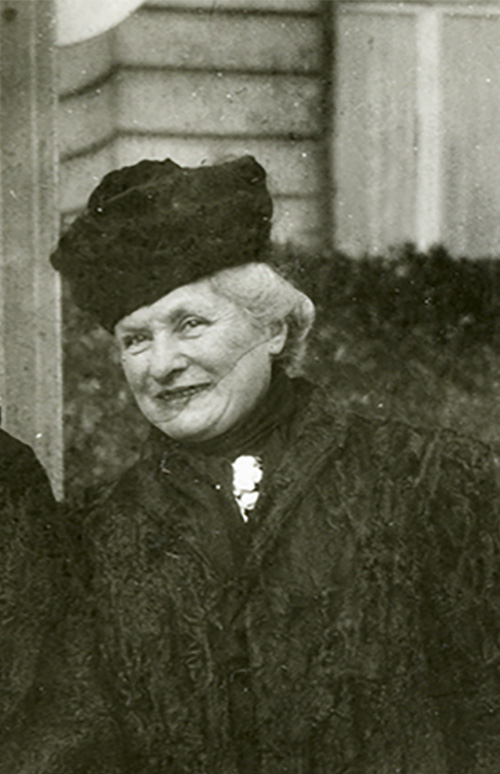 René tells his parents that he was amazed by the appearance of Jeanne Baumann Salomons, noting that “she really looks fine.” René took this photo of her during his visit to Paris. 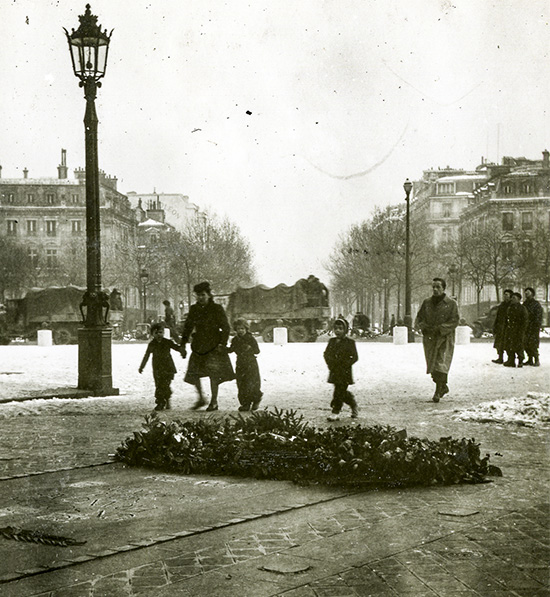 During his time in Paris, René took this photo at the Tomb of the Unknown Soldier.