Our boys finally had their baseball game with our friends the rival hospital. The latter expected us to be easy pickings, and, after our pitcher walked the first three men purposely, they were even more convinced that it would be a cinch. Imagine their chagrin and surprise when they ended up on the short-end of a 17 to 3 score!

Bill Drew got back last night after having spent some time in a British Hospital. He had gone to Cairo with Serge on leave, but on his return trip he became extremely ill, temp 104’, diarrhea, somewhat delirious, and other symptoms. Apparently some G.I. thing, though Bill thinks he had a virus pneumonia. The British labeled it “The Rigors.” Anyway, Bill is O.K. now tho’ he has weight to gain back again – and you know Bill, he had very little he could safely lose in the first place.

Bill Newsom got frisky the other day, went out with the baseball team, put someone out at first base and returned with a fractured radial styloid in his left wrist. Fracture is in a good position – in fact, is not out of position at all. So, now he is packing a nice cast around and it sort of puts a crimp in our anesthesia rotation system. There used to be five of us, and that leaves four. But, now, Jim Hamilton is leaving us for a month to go to a General Hospital to get some special anesthesia training, particularly intra-tracheal stuff for chest cases, something we have sadly lacked the information on. Jim, of all of us, has been most interested in anesthesia and as a consequence knows more than the rest of us do about it – so it’s his good plugging that has gotten him this nice assignment. He ought to come back with plenty of good information for us — we’ve been strictly amateurs, all of us, all along.

So, where there were originally five, and then four “little blackbirds,” now there are but three. But, hold on, this next week there will really only be two, Paul Stratte and I — for Pete Joseph is going on his leave with Hal Williams. Of course, with work as it is, Paul and I will definitely not be over-worked.

New innovation at the “Club”. We now have artichokes at 15 cents apiece with some sort of garlic dressing. They taste just like our own artichokes at home (I don’t mean the dressing, however), and the last few nights they have made good appetizers before dinner. They remind me, however, of those little artichoke hearts that are extra-special good and wonder if perhaps you could sometime send a small can of them over, and while you are at it, a small can of Del Monte asparagus tips. Just for a taste – don’t try to send more than one can of each. We really get plenty to eat, but having been reminded of those things, well, right now my mouth waters a bit for them. 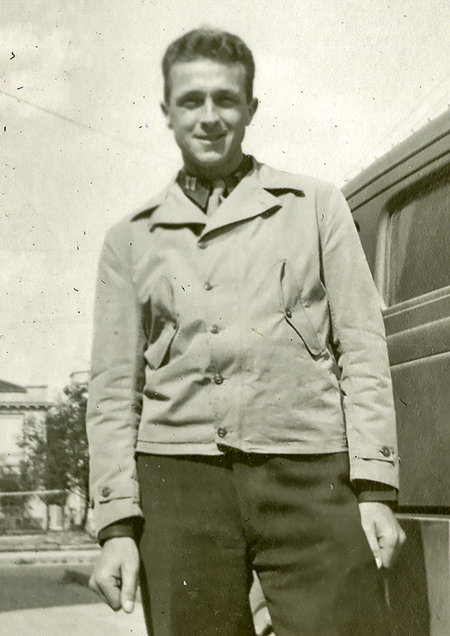 Dr. Bill Newsom broke his wrist in a baseball game. 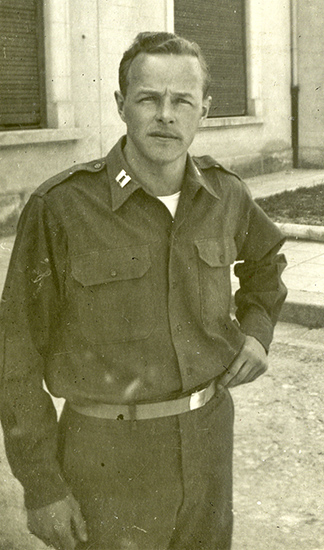 René tells his parents that next week he and Dr. Paul Stratte (shown above) will be the only two doctors on anesthesia rotation.