Am trying a little experiment and do not know how it is going to work out. The sun is shining beautifully, I have just finished lunch, there is a slight wind, and I am outside our quarters sitting on Bret’s sled with the typer on a stool in front of me. If the paper doesn’t blow all over the place it should work out O.K.

Yes, we’ve again been having some nice weather, rather crisp in the early A.M., but we haven’t had those gloomy, sun-less days that are so depressing when there is nothing around to do.

Surprisingly enough I am feeling fine – why do I say ‘tis surprising? – Well, Chappie pulled my right upper wisdom tooth for me yesterday. A couple of nites ago the bloomin’ tooth kept me awake a good part of the nite, ceasing its aching only after I took some codeine. The next morning I missed Chappie (as he was out hiking) and the tooth felt O.K. so that I completely forgot about it until I went to the movie with Chappie that nite. And then, sitting between Fadley and Chappie at the show, the darn thing started hurting again. It felt as if there were a cavity with something sweet stuck in it. Soooo, just as soon as the show was over Chappie got me in his chair and took a squint. By golly, somewheres along the line I had lost a whole cusp off the blinkety-blank tooth! There was a big filling in the tooth anyway and, of course, now a nice exposed area alongside the filling. Took a little more codeine, went to bed and yesterday A.M. Chappie yanked the thing out most painlessly. Loafed, mostly in my room yesterday afternoon, went to sleep early last nite and today I feel like a million bucks!!! So that’s that!

I saw a bit of the country the last couple of days, visiting some other units in the area – just hitch-hiking around. Bret was able to see his brother some days ago, for which he was mighty happy. The Old Man and Kuzell took off a couple of days ago, presumably in search of the former’s son and the latter’s brother.

You may have heard what we heard, both over the radio and from the people concerned, last night — some of whom were here for a visit, one of the gals being a good friend of Chris Colletti’s.  ‘Twas announced that one of the old Evacs in this area was awarded a Unit Citation for its good work since being in France.  It’s our friends from Roosevelt Hospital in New York — the 9th.  In the radio broadcast it was stated that they were given the award because of the way they were able to handle the tremendous figure of ten thousand patients in three months.  We laugh, ha, ha, for we took some eight thousand in seven weeks and twelve thousand in three months.  But then, their former C.O. is now in the surgeon’s office of higher headquarters and ‘tis from there that the award emanates, so it was naturally not unexpected.  Had they gotten an award from the French for having taken care of all the French casualties in Italy when they were there (tho’ being in a rear area they sort of acted as a general hospital for the French goumes etc.) ‘twould have been most justified.  They have been over the same time we have, but they had more work in Africa than we did, as they were north — but that’s the only place they had us beat.  That’s the way it goes! 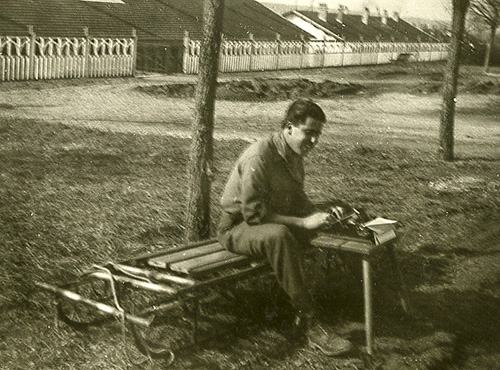 René typing while sitting outside on the sled that Bret Smart made.