Wednesday nite we had a party scheduled — this time with a band, but the band had to be called for at a place some little distance from here. As I wanted to go there, and as Carroll had heard that he could get his camera fixed there, we decided to go up with the truck that was being sent out after the band, going early so that we would have a few hours in which to roam the city.

The night before we went, sitting with Del at the movie, I told her our plans and suggested that she go with us. She did, and we had quite a nice day of it. The city [Nancy] is a mighty nice one, large, practically untouched by bombs, etc. except, of course, along the rivers – the bridges being knocked out. Large department stores are everywhere in evidence, both modern ones and old ones. Didn’t buy anything, but window shopped and also went into most of the stores, as Carroll is anxious to buy a big beret, French type, to wear and also to send home. He got a couple of small ones here in town, but he wants some with larger diameter.

With the exception of Paris and Rome, the above city was about the nicest I’ve been in over here – it has very little of historical interest that I could find – it’s just a city, probably more like a city in the U.S. than any of the others, complete with buses, street-cars, etc.

Shortly before we were to pick up the band, we went to the Red Cross Club (where we were supposed to meet them) and we were surprised to find that a show was just starting in there. The band we were picking up we knew little about, except that Serge, who had been in charge of the committee arranging for the band, had told us that the leader’s name was “Jerry Fink”. So, imagine our surprise when, in introducing the various members of the band that was playing on the stage at the ARC, the master of ceremonies introduces Jerry Fink as the drummer. We realized, then, that we would have to wait and see the show, since our band was part of it. As a consequence, the band was ready considerably later than they had told us they would be, but, as long as we got back home in time for supper and to wash up before the party, it was O.K. as far as we were concerned.

It turned out to be a mighty nice party — not a brawl, but not the sedate and rather boring parties that some of these other gangs have had around here.  Of course, there were a few things that made our party different than most.  1) Most of these other gangs have their bars at the party and charge for the drinks, thus slowing down things by taking time to make change; whereas our drinks were free and there were full glasses at the counter all the time. The drinks consisted of a punch made up of gin and fruit juice.  We had gotten the gin in bulk — another one of those ration deals — stuff made over here by one of the base-section groups, and had bought it and saved it specially for a party such as this was.  2) We had some very good decorations gotten up by our few ingenious gals.  Bette Richardson had done the artistry as usual and she had several large drawings on the walls with appropriate captions beneath them.  3) Our wonderful Chef and Pastry-Cook — need I say more?  This time he came out with some wonderful devils-food chocolate cake with a flaky chocolate icing, some peach-tarts, cream-puffs, chocolate-custard cakes and a few other choice pastries, besides some creamed-chicken sandwiches, made with mayonnaise of his own making!!!  ‘Twas all scrumptious!!  And, as was to be expected, there were nothing but crumbs (and mighty few of those) left when the party was all over.

We had quite a gang at the party.  There were so many visitors and strange faces that when one saw a member of the 59th he greeted him as a long-lost friend.  Well, it wasn’t quite that bad, but actually we had more visitors than at any other party I can remember.  It made it kind of nice, too, particularly since all the visitors really seemed to enjoy themselves and found out what kind of party the 59th could put on. You see, many people had been invited to attend by those that had been on detached service (D.S.) – sort of reciprocating for the nice way all were treated by these other outfits. As a consequence, we had some of the Illinois boys down, some of the Sacramento gang also, and some of the members of the other unit in our area. The gang that is still on D.S. with the outfit Roy, Paul and I had been with on the Invasion, all came down just for the party, bringing Helen Nelson down with them and then returning the next A.M. 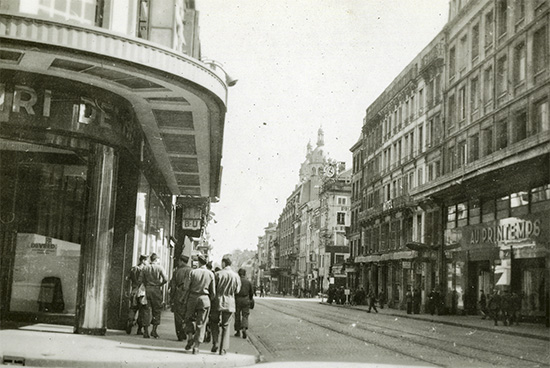 Main street in Nancy — about 45 miles from Epinal. 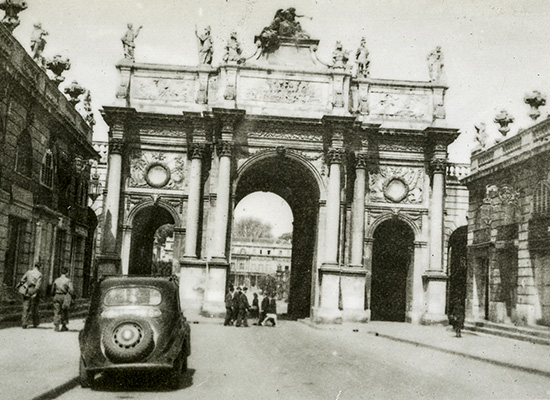 Arch leading to the Old Town in Nancy. 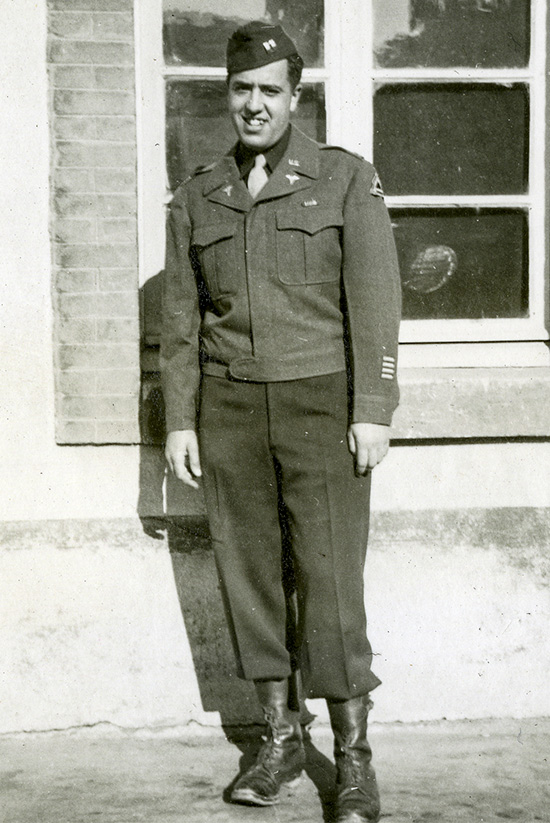 René (above) went to Nancy with Carroll Russell and Del Peche (below). 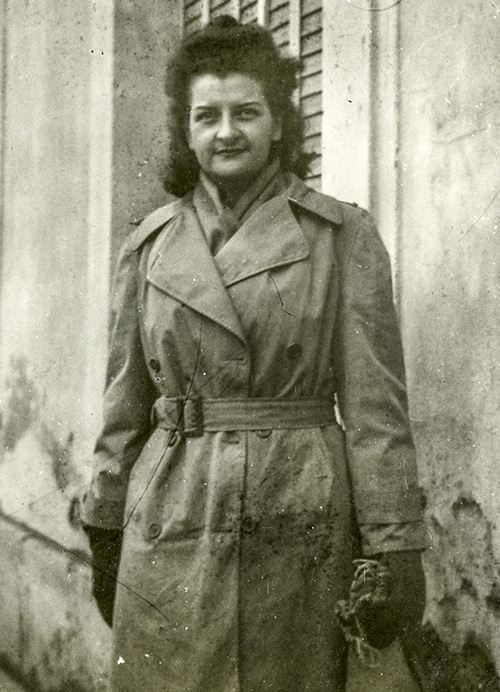