Kind of let a couple of more days than I had intended slip by since last writing to you.  However, the last few days have been such beautiful ones that it would have been a shame to have stayed indoors just to write, and it was just windy enough to have blown the paper around a bit, making it too difficult to type outdoors.  As in San Francisco, the wonderful weather goes in streaks — and so it did, three days of it!

Once again we are HOME and glad of it, even tho’ all are still sitting around with little to do.  However, if the weather would keep up as it has been the last few days, no one would mind so much this lazy life.  It was actually hot!  Everyone started out to get outdoor exercise: walking, volleyball, and the boys even started up some early-pre-season-baseball practice.

The last day we were with the 27th Evac, we had absolutely nothing to do, and as Jack came up to get us to sign our pay-vouchers, we got all the dope about the “in-activities” of the rest of the 59th gang. So, we decided we might as well take off and return, rather than sit around at the 27th thinking about the swell food the gang was having dished out to them down here.

We spent our last evening with the 27th down at their Officers’ Club and had sort of a gay time – got their Col. down with us and we got a kick out of his tales bragging about himself considerably. We had been previously warned to expect him to get us over in a corner to talk about his “friend Freddie Rankin” – i.e. General F. Rankin of Med. Dept. in Washington D.C. He told us how, when they were still in the U.S., whenever anything happened that he didn’t particularly like or if he wanted something special, well, he didn’t just go to his immediate superiors, but he merely picked up the phone and called Washington D.C. and got his pal Freddie on the phone and found out what the score was.

Did I tell you that in a long article in one of the Chicago Tribune’s papers a few weeks ago there was all the dope about the 27th, written by some female reporter who had spent a few days with them some time ago?  Besides listing all the Illinois members of the unit and telling of all the hard work they have done in the 10 months overseas, the article stated that in the autumn months, and up to Christmas, the 27th had done one third of the work done by the hospitals in this area.  What a laugh!  The people of the 27th realize how much exaggeration there was in that article and dislike, very much, that kind of publicity.  Everyone here laughs at them for the things said in the article and other hospitals have even posted it up on their bulletin-boards ridiculing them.

However, the most recent crowning glory was the unit that topped them in that sort of stuff.  At least the publicity that the 27th got was unsolicited.  But in a recent broadcast, the C.O. of one of the other groups spoke, telling of the difficulties of functioning in an Evac. Hospital “in tents” in France today.  It was Col. Sauer, whom most of us know.  They, like us, have not been in tents since September.  Now the 27th really has the laugh on them.  See why we are most happy that we haven’t had any such publicity ourselves? As far as any knowing what we have done and are doing, the only ones we care about are the two universities.

It has really been interesting hearing what all the men, officers and nurses have had to say upon their return from duty with some of these other outfits.  They all felt much the same as we did — that one appreciates more and more our own outfit when one goes away like that.  Apparently none of the other outfits care for their patients as well as we do, particularly in the wards, and our system of work in the Shock ward has got them all beat.  Yes, as R.B. Sr. so frequently does, we “modestly admit now that we are good”….. 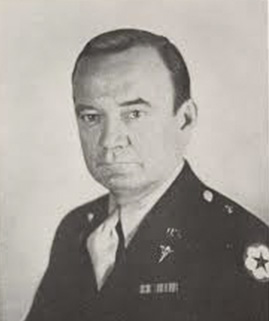 René tells his parents that the Colonel in charge of the 27th Evac. Hospital, in Bacarrat, France (where René had been stationed for about 10 days) was bragging about his “friend Freddie Rankin” — General F. Rrankin of the Medical Department in Washington, D.C. (pictured above). 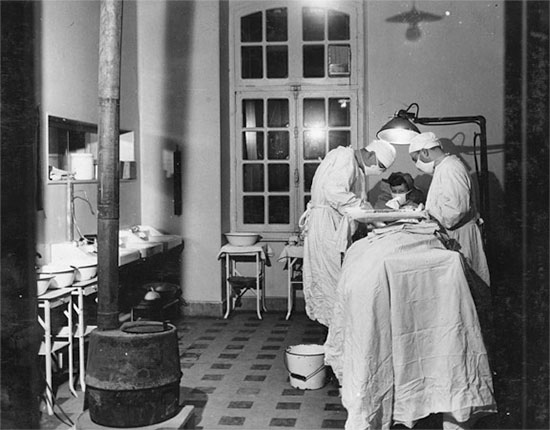 René also mentions that in publicity about another evac. hospital, it was reported that they were functioning in tents, but, in fact, they hadn’t been in tents since the previous September. The photo above was taken during René’s time in Bacarrat, France in the winter of 1945.